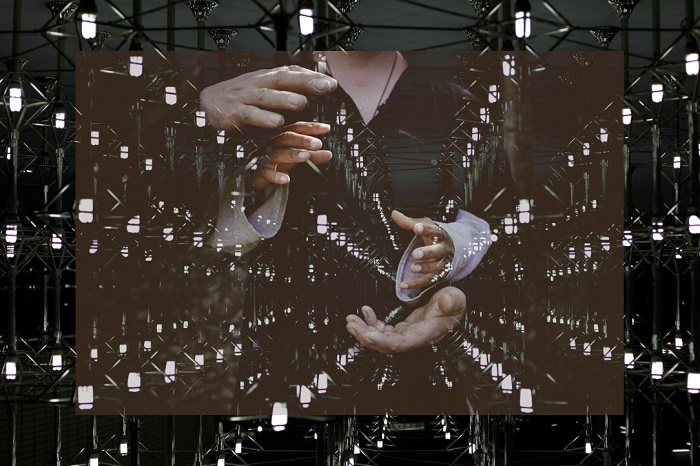 Journey to the heart of the Wave Arising project with the techno figure 69dB and the dancer Kynsie for a zero gravity sound that is off the beaten track, sitting somewhere between live act and DJ set.

“The feet rooted, the head in the cosmos.” Such is the current state of mind of the duo Wave Arising who sought to transcribe the “Slow Rave” energy that vibes with in a truly atypical set. An offshoot of the Dharma Techno project, Wave Arising combines music and movement, trance and spirituality, tradition and experimentation. In interview, they explained their mission to tame bodies and minds through workshops and audiovisual performance. The avant-garde Scottish musician 69dB has joined forces with Kynsie, the dancer of Reunionese and Ivorian origin, uniting and improvising in a technoid therapy session based on tribal and maloya cultures, to name just two. In trying to raise awareness while recalling the place of the black identity in our world, the duo offers two hours of music, whereby 69dB’s live set communes with his partner’s deeply personal selection.

69dB: “The liveset that you can listen to in the middle of the mix is a continuation of the “Dub Technic” sound that I have been developing since 1995. Through the Wave Arising project, I finally find a space where these sounds can express themselves freely again. With this perspective of “Slow Rave,” one consciously feels the energy while entering a soft trance. As usual, the music is improvised and made of elements created from kitchen percussion, guitar, voice or field recordings… Tinged with polyrhythms, my music is directly influenced by Africa and its diaspora with figures including King Tubby, Coltrane, Fela and Jimi Hendrix.”

Kynsie: “This is the first time I’ve offered a selecta and I’m thrilled that it’s for the PAM Club series alongside my partner. Again, there is a lot of meaning and symbolism here. As a dancer, I am carried by the music. The sound is our first support and it occupies an essential place in our practice. For this mix, the idea was to propose something that echoes my origins while resonating with a pan-African electronic and experimental production. I chose a selection that could harmonize with Seb’s liveset but also fit into a global context of emancipation and affirmation of multiple black identities, with a final message delivered by Sault: it’s time for mentalities to evolve, especially concerning black and racialized people… for the present and the future. This generation cares.”