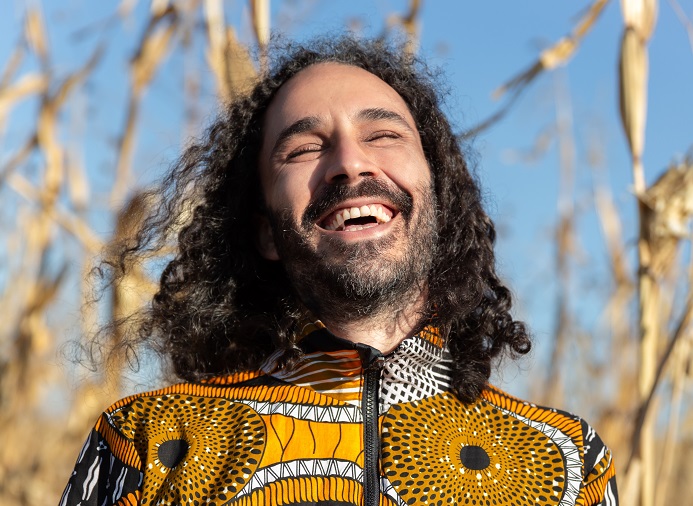 From Gulu to Mexico City, Pambulo cooks up the beat

The Mexican DJ and producer Pambulo has released Kabalagalaxy, a debut EP on the Mexican-Ugandan label Makabila Umoja, which deploys a danceable electronic mix built on  sounds from both worlds. Read the interview and listen to an exclusive DJ set.

Until now, Pablo Pascual was known by the name of Low End, a project created as part of the psychedelic and progressive trance movement that has been bubbling up in Mexico since the late 90s. Inspired by Eat Static and the glitchy productions of Aphex Twin and UK bass in all its forms, his life as an artist took a turn when he visited his Mexican friend Emiliano Motta in Uganda, one of the producers shaking up and animating the local club scene. He then joined Makabila Umoja, a label that has released EPs by Swordman Kitala, Willstone and Leo Palayeng. It was in the creative atmospheres of Gulu and Kampala that he encountered other likeminded artists and conceived of this new project, which reflects both his roots and the different energies he has acquired along the way. Meet the artists and listen to his PAM Sound System Radio Show Mix below.

How and when did the Pambulo project start?

I think it really began to take form when I went to Uganda in 2019. Emiliano Motta (Moganjah) had already been there, working, playing and making music for five years or so. He showed me new music each time I saw him in Mexico and it really fresh and super cool. Then, when I was there I began to really understand it – ll the amazing cultural heritage, the vibes of the people and all this talent and creativity exploding everywhere. You can feel the music all around you, the dance, the drums, it’s a very cool form of “madness.” Kampala had all these musicians from around the globe after the Nyege Nyege event. I had many experiences, like going to Kabalagala, where the local people party, and it was a very energetic thing to witness. I had the chance to record one of the best drummers I’d ever heard, Omutaba Ngoma, and I met a lot of people there. It is hard to describe, but the people in Uganda have a very special chill vibe. Then I went to Gulu with the amazing human being and musician, Leo Palayeng, and it was so amazing to see that, just a few hours from the capital, the music, the culture, the people, were all very different and unique. Otim Alpha is another genius musician with an uplifting vibe who comes from there. I recorded there and produced a funky track for Kornyellows Africa.

How did you turn this experience into music once back home?

When I returned to Mexico, I began to decipher and process the experience. At the end of the year, Leo came to Mexico, and we had the chance to start a track with Moganjah. It was a great experience, to feel his vibe and understand his amazing ideas and, of course, record his mind-blowing Adungu playing and vocals. I made a remix for Swordman Kitala, one of the top MCs around for sure, which was the first track I finished as Pambulo, even without having the project name ready. At least I had a new sound. So here I am with a new project waiting to have a chance to return to Uganda during these crazy times, but working hard to make more and more music.

You are merging Mexican and Ugandan music on this EP. What are the similarities between these two areas of music? What is your composition process?

Well, I am not trying, at least not consciously, to merge Mexican and Ugandan music. I guess it comes out naturally because I was obviously influenced by Mexican folklore – there is a lot of great music and diversity there. I just think if you try too hard, the music sounds forced. It’s not so easy to blend two styles, because what you hear is a loop of house music, with a sample of folkloric music. The musicians that really merge them properly are just amazing. There are similarities of course, especially in places like Veracruz or Guerrero, where there is a significant Afro descendent culture. There is a style called Son Jarocho, even with the occidental influence, in which you can really hear the Afro soul. Eventually I want to record some Mexican folkloric music, and in some cases to merge it in a more obvious way. Maybe I will make some cumbia acholitronix one day! I use samples of recorded stuff to begin an idea, sometimes I just begin a rhythm and play some synths. Now I’m working to make my process a little more “live” and not so much mouse and keyboard, and I’m learning to play drums.

What is your role within Makabila Umoja?

Makabila Umoja, as any of the many independent labels, is just getting started. Emiliano was the founder and, with all the great music he has made throughoutall these years he made a platform to share it. There were a lot of people around with these big egos who weren’t giving fair treatment to Ugandan musicians, who were very abusive and the opposite to Emiliano. I have been helping him since the beginning because we are great friends, but I also truly believe in the project and in the amazing music. We are working hard to share these sounds all around the globe, and giving them a workable structure with the resources we have so we can make a solid crew and work with all these musicians as our equals. I know this may sound obvious, but sadly, there are a lot of producers, not all of them, that record and just say thank you. Then they put the track out and never stay in touch. For us it is very important to show these musicians that we are making everything for the good of the whole crew. I think having that complicity with someone, in the good sense, is always one of the important parts of making a project work. If you combine it with trust, discipline and hard work, good things begin to happen. My role is as a producer/musician and being part of the management.

What can we expect from Pambulo in the near future?

More and more music. Now I’m working on a collab with Swordman Kitala, Moganjah, Sandunga and I’m gonna make another one with Leo Palayeng. I’m producing a track for two great MCs, Lebon from DRC and Blessed Man from Uganda. In this music you can use many different tempos and structures, which I love and it means the sound has all these different styles and feelings in it. I keep researching and learning about the music of the different countries in Africa. It’s so huge and diverse that I think it’s gonna be a lifetime challenge – trying to merge all that I learn with my style in a way that has some kind of impact on people. It is always very rewarding when anyone tells you that one track really got them. As soon as all this chaos has some more structure and clarity, for sure I want to go around the globe and share my music with all the top Makabila Umoja musicians. We will make it happen , we just need to be patient like everyone else and keep up the hard work.