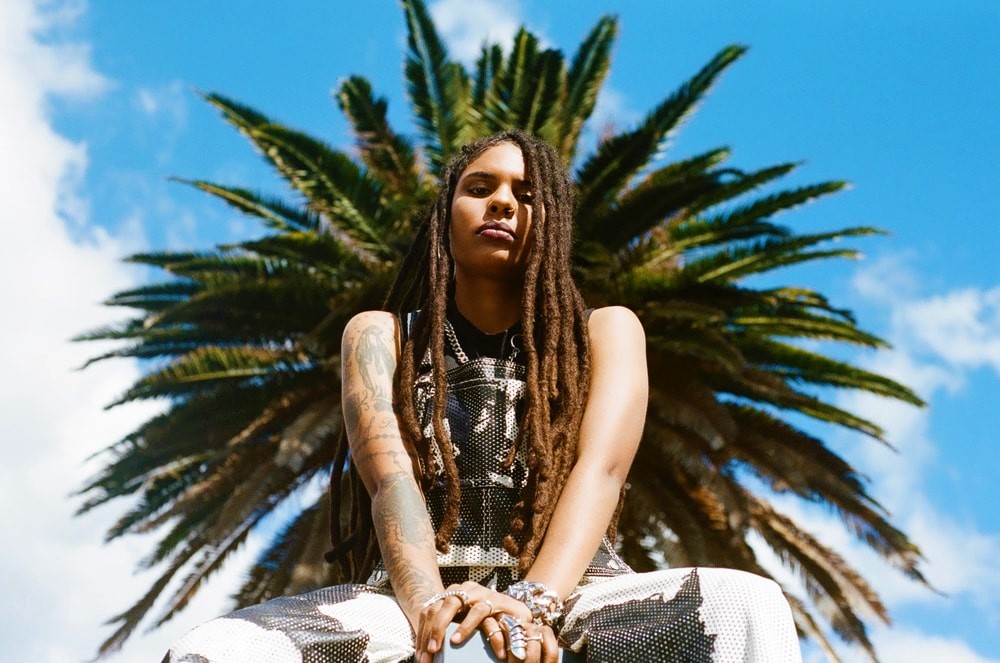 South-African female rapper has just released her second EP, Resilient, and intends to impose her sharp flow beyond her hometown Cape Town.

Catherine St Jude Pretorious aka Dope Saint Jude originates from Cape Town. After graduating in political sciences and founding South Africa’s first drag-king group, this feminist activist studied sound production and eventually released her first solo project two years ago, Reimagine.
Earlier this month, the artist who defines herself as a poetess has released her second EP, Resilient, ranging between pop and hip-hop. Recorded and produced in London by Pete “Boxta” Martin and Dantae Johnson, this record sees Dope Saint Jude tackle her favorite issues with a sharp flow: social, racial and sexual equality.
Don’t trust the pictures in which she plays the bad boy. Dope Saint Jude may well be this committed and determined young woman, ready to relay the words of the voiceless communities, she also is this radiant person whose only smile could abolish all the divisions that are still spoiling South Africa. After having fired MaMA Festival’s audience, she played at Africolor last weekend. Lively encounter.

Why did you choose to call your project Resilient?

Because the word “resilient” means to be able to bounce back from a difficult situation; and I think that in my life I’ve had some difficult situations but I always managed to see the positive in it and to fight through it. So I wanted to celebrate that.

Can you tell us more precisely what kind of difficult situations you bounced back from?

My all life. I grew up in post-apartheid South Africa, I came from a poor background – a family which was struggling a lot. And besides that, in the last two years, as soon as I started making music, I lost my mother. I have four brothers so I was very close to my mother, she was like my rock in life and when I lost her it was very difficult but I got trough it. I even went on tour the same day as my mum’s funeral. So I’m just working really hard, trying to work on my career and not leaving the negative overtake my life. 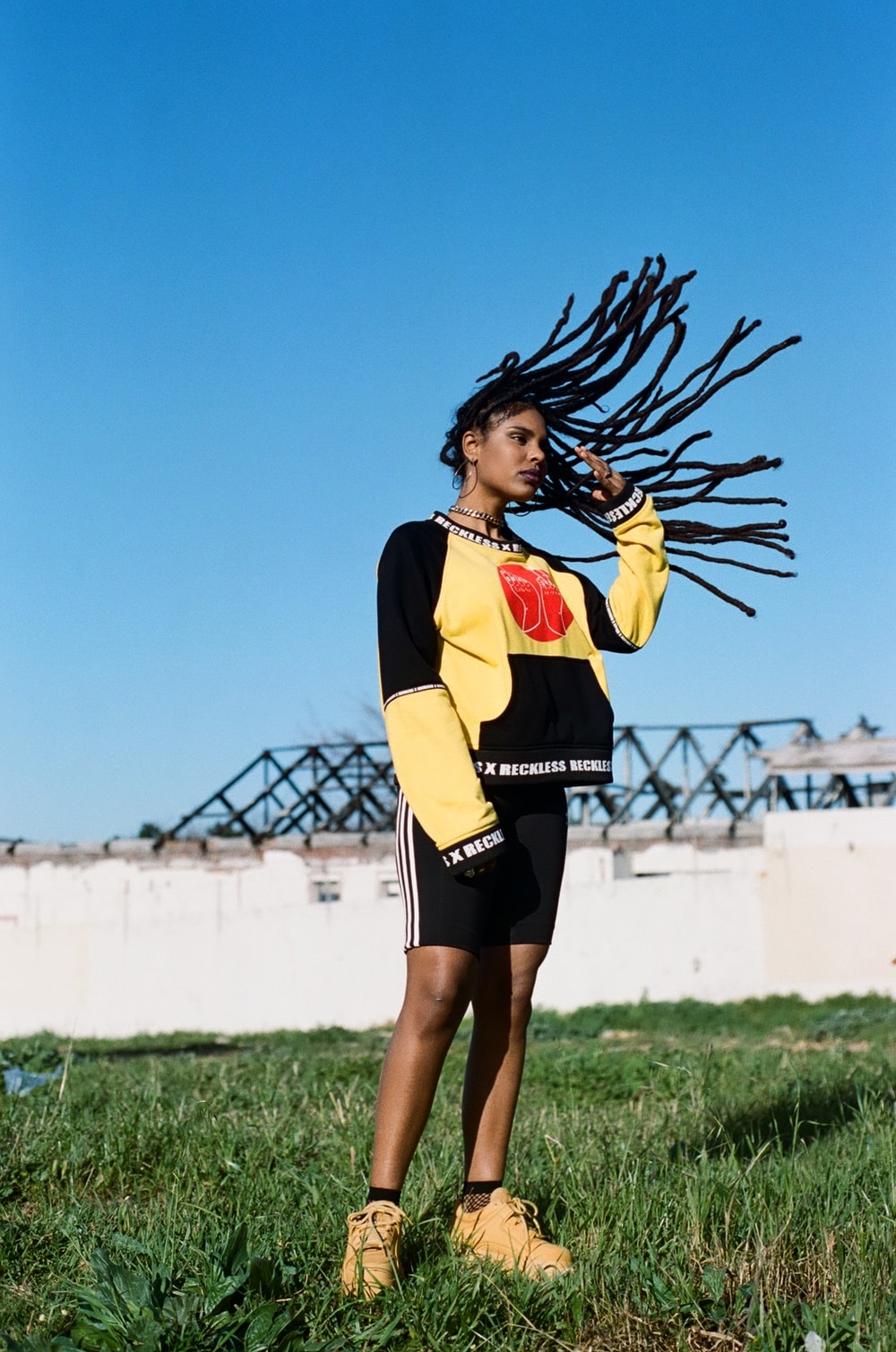 “Grrrl Like” refers to “Riot grrrl”, a feminist musical movement at the crossroads of punk rock and alternative rock, which surfaced in the early 1990s in the United States. You were born in the same ’90s decade in South Africa. To what extent did this movement have an impact on you?

I think that the “Riot grrrl” movement was really wonderful. It resonated with me and made me feel strong. But at the same time I couldn’t bring it into my life because they were young White women in [North] America. And even though I like the message and I think what they did was amazing, I wanted to bring it to an intersectional context of queer, Black and African people. With this track and video [“Grrrl Like”] I wanted to salute them but also make them more modern.

Can you tell us more about your squad? In the making-of of the video you say that these people are” improving your city, your country and the society”. How?

I worked with some of these people on my [fan]zine. They all do amazing things. A lot of them do cool art projects, some of them work in the community, some of them in collectives in order to change people’s minds in South Africa about trans and queer identity. So I just think these people are doing work to change the way people think, which is very necessary in the world, but also in South Africa. We need to talk about that because you know that Africa is very homophobic; it’s not easy to be queer in Africa. So I think they are doing an amazing work and I want to put their work out on my platform even though I have a small audience.

About “Grrrl Like” you said that your favourite line is “But I don’t give a fuck, I’m the shit, and I know.” Can you explain?

I wanted to celebrate the fact of being proud of yourself. It is who I am and I’m proud of who I am and I don’t care what you think. It’s important because sometimes when we talk about feminism or racism it can be very sad and it can be very much like, “I feel sorry for myself” or “people are hurting me”, and I understand that. But I want to do something more like “I’m strong” instead of “I’m weak”. So for me that line is very important.

One of the tracks on your EP is titled “Didn’t come to play”. What for then?

I just mean, I don’t take what I do lightly. Some people when they make music, they take it lightly, you know? Like, it’s fun and games. But for me, what I’m doing is important because from where I come from, not many women get to this life, get to speak and meet so many people and do have the impact that I know I can have. So I didn’t come to play! I came to make some changes and to change people’s minds and to use my platform to talk about important issues. 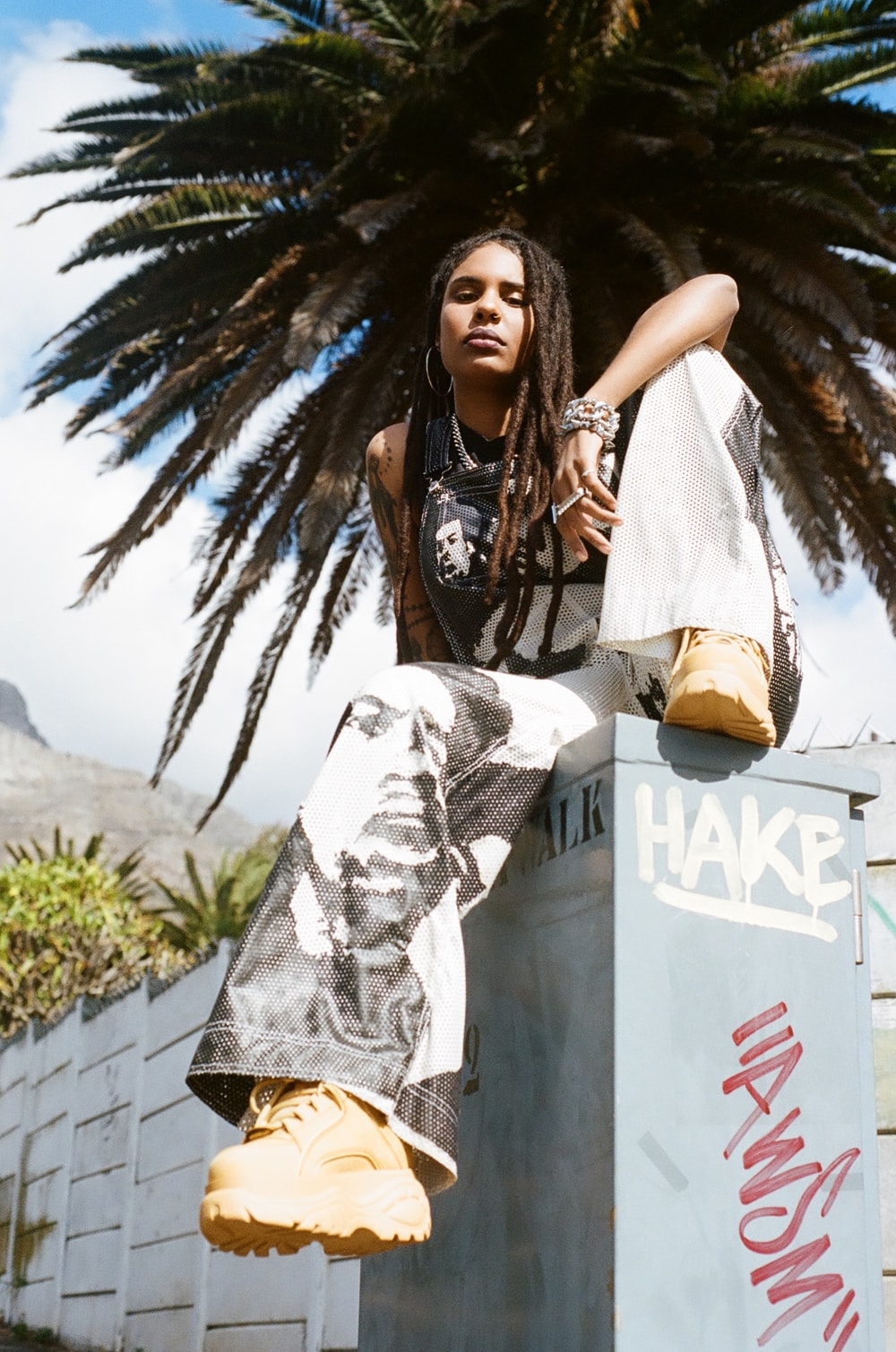 There are a lot of activists in South Africa but I don’t know if you know their names abroad. There is also this very famous artist Thandiswa Mazwai. These people just go out and live their life. They have so much strength of character, and I admire it. What I admire is not what people do, but how they carry themselves. People like Miriam Makeba, Winnie Mandela, Brenda Fassie: these women carry themselves with a lot of strength. Michele Obama too! She walks into a room and you feel a strong woman. They’re the kind of people who inspire me and make me feel strong.

Miriam Makeba died only ten years ago. What did she represent for you?

Wow! I don’t know how to put it into words. She was a powerful woman, she was exiled, she was kicked out of South Africa for a while, only for fighting apartheid. She should have a bigger legacy in South Africa but people pay more attention to what men do. I think she needs to be more celebrated. So that’s why I like that song by French artist Jain. In South Africa people really don’t know this song, and they laugh: “Who is this White girl who is singing Miriam Makeba?” But I think it’s cool, and I like it!

About your musical influences, you mention 2Pac or Dr. Dre but I heard you did not listen only rap?

Yes, I grew up listening to different kinds of music. I got very eclectic tastes: I love Santigold, and M.I.A., I listen to radio hits and some old school rock and classical music. I find beauty in all of them. 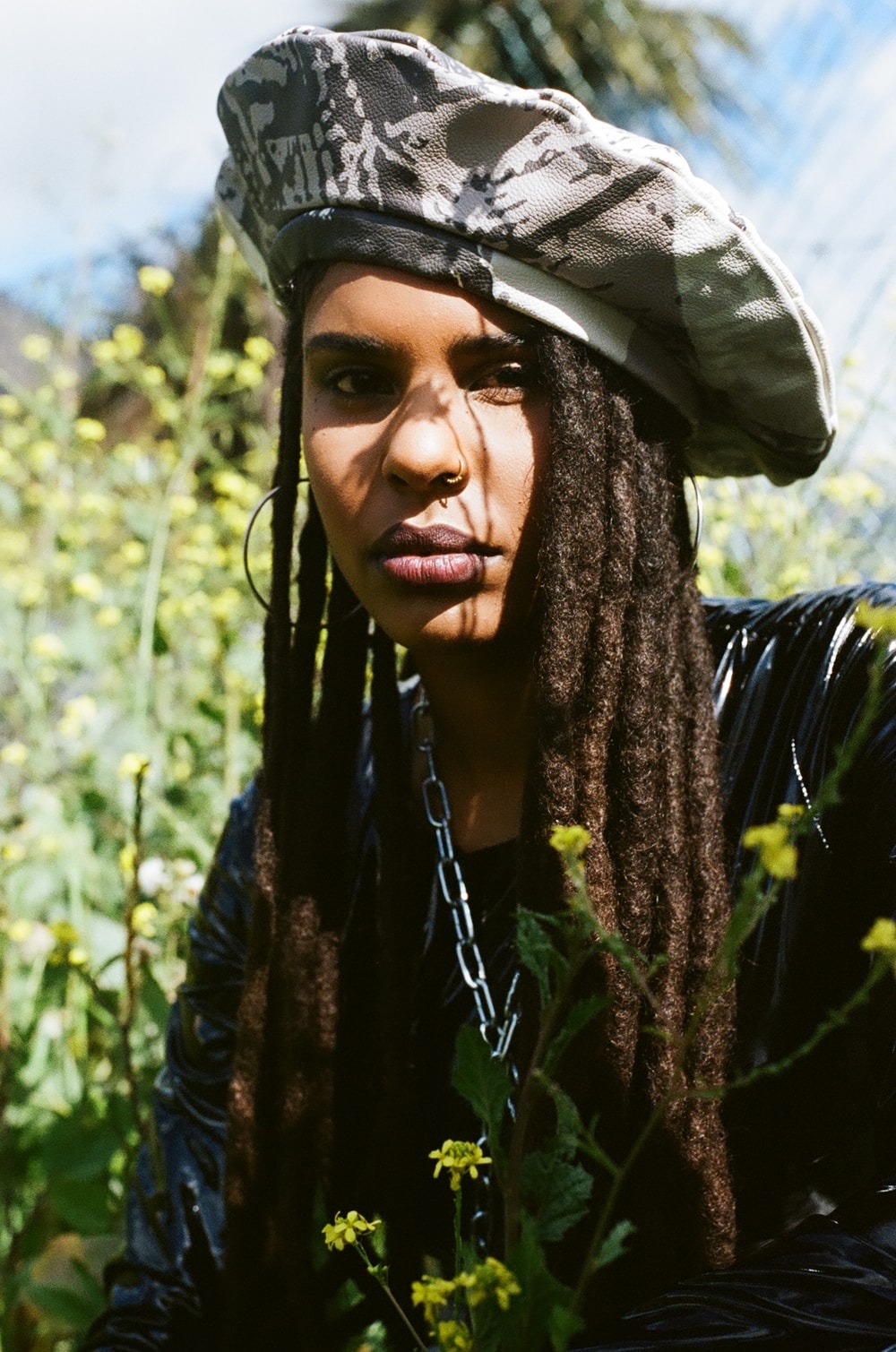 What about African music?

I do listen to African music but I must be honest: South Africa was – and still is – a racialized country of Black people, White people and, in the middle, colored people like me. And our media reflect that and they feed us with [North] American and UK music. So I grew up listening to this music more than the African sounds. During the apartheid – and even until very recently – they didn’t play South African music in South Africa.

Your country is shaken by new cultural and political movements that advocate radical decolonization. They want to get rid of the White supremacy once and for all. According to you, why are these movements so popular in South Africa?

Because people are so sick and tired! In 1994 when Nelson Mandela became president, everyone was happy and excited but nothing has changed: Black people didn’t suddenly get money and houses. No, they stayed poor. In paper we’re all equal. But in reality White people are still owning all the property and all the businesses. People are tired of being sold a fake dream. So I think that we do need a radical decolonization. Not to say we have to kick all the White people out of South Africa, because I don’t believe that either. But I do believe that we need to have more people of color owning resources and business. Just starting with education: maybe we don’t have to give people a business, but we have to give them education so they can start their own business. But the fact is that education is so expensive only rich people can afford it – only White people can afford it. So you keep Black people down by not educating them and I think that’s horrible. We need to change that!

Read next: From the precocious child Pongo Love to the feline woman Pongo 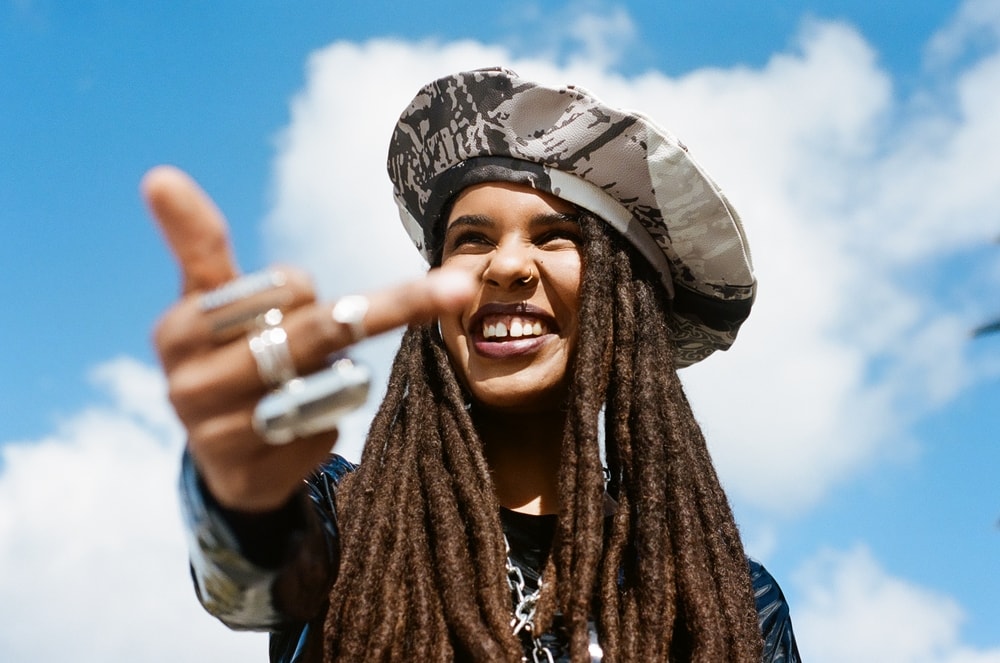