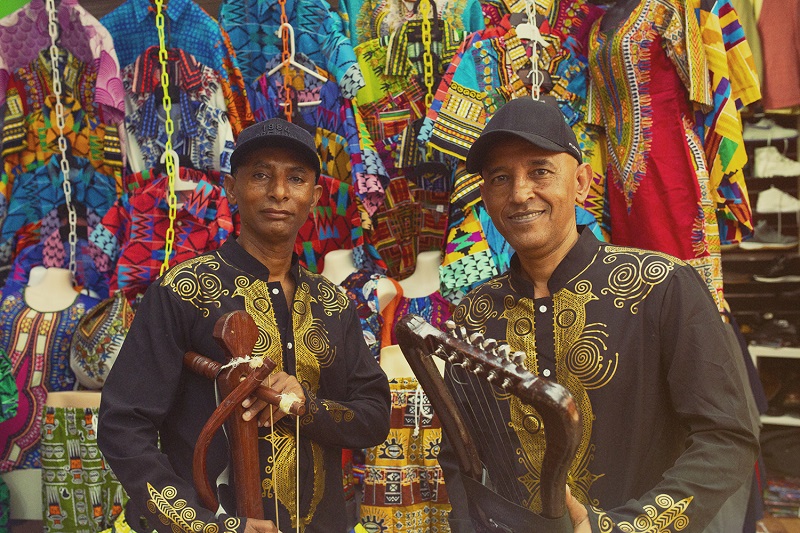 Originally from Ethiopia, Eritrea and Australia, the Music Yared trio brings the ancient musical traditions of East Africa to the contemporary world. PAM invites you to read the group’s interview by listening to their new single “Ruhus Gama”.

Respectively Eritrean and Ethiopian, Anbessa Gebrehiwot and Haftu Reda master the East African string instruments krar and masenko. Both exiled to Melbourne at different times of their lives, the erudite musicians met with producer and multi-instrumentalist Dale Gorfinkel, who became the backbone of this trio born in 2016. Together, they compose folk music with hypnotic power accentuated by melancholic songs, with themes like love, distance, culture or separation. On the occasion of the release of their first eponymous EP on the Australian label Music in Exile, the three artists talk to us about their modern approach to traditions and this magnificent third single written for a married couple.

What does Music Yared means ?

Music Yared is named after the first composer in Ethiopia, Saint Yared. He lived in the 6th century and he’s kind of like the Ethiopian Mozart. As a student of the church, he was not good in his study. The teacher was unhappy with him and repeatedly warned him and eventually there was some punishment. He was not happy and tried to return to his family home which was far from the church. He was tired on his return home, and sitting on a log, he saw an ant repeatedly trying to push something up the tree but it fell down six times. On the seventh attempt the ant managed to climb up with the object. Yared saw what the ant was doing and said to himself : “why did I go from my neighbourhood to the church for my learning only to fail and return home again? How come this small insect can achieve this, yet I’m a human being but not capable of success? If I concentrate on my learning I can succeed”. He returns back to the church, studies hard and becomes a very wise and respected man.

Yared created all the Ethiopian Orthodox Church songs and still now, his songs are sung in every Ethiopian church. He created new tuning and notation systems and, inspired by nature, he also introduced percussion and ritual movements into the church. Although he is well known in Ethiopia, Saint Yared is not well known in the wider world, so we’re just doing our bit to share this part of history.

In which context have you met each other in Australia ?

Anbessa arrived in Australia 2007 with renowned singer Abraham Gebremedihn, to perform for the Ethiopian communities in Sydney and Melbourne. As a songwriter in Ethiopia in those days,  Anbessa was always under suspicion from the government who interpreted his songs as having hidden political meanings even though the songs were completely innocent. After arriving in Australia, he discovered that one of his colleagues had been arrested back home and he then sought asylum in Australia.

In 2013, Haftu arrived in Melbourne and also sought asylum.  He joined ASRC, the same asylum seeker organisation which had previously provided support to Anbessa. It was there that Haftu met Dale who was, at that time, voluntarily facilitating a community music ensemble. Soon after, Haftu met Anbessa through a fundraising performance at the centre. Actually, Music Yared was initially formed as a trio in 2016 with Haftu, Dale and the multi-talented Evelyn Ida Morris, with Anbessa joining the following year. Nowadays we also enjoy performing with the incredible Oromo singer Mulu Bekele.

How do you bring the traditional folk songs into the contemporary world ?

Music is always developing. Non-stop…it must change with the times. For some folk songs, we develop our own lyrics, change the rhythm, and create new beats. Traditionally, songs can be very long and one song can have many themes. But contemporary musicians tend to focus on one theme only, such as love, and songs tend to be shorter. Music Yared likes to mix it up. In Ethiopia, youngsters have also standardized the instrumentation. As well as the modern krar with a guitar pickup and steel strings, it is very common for bands to have drum-machine, keyboard, saxophone and electric bass. For us, we enjoy trying out different instrumentation and searching for sounds that combine the traditional and the contemporary. Dale brings an interesting element, because as well as acoustic drums, he also plays bass lines and percussion sounds on a sampling pad.

« Ruhus Gama » was written for a specific Australian-Ethiopian wedding in 2017 and it is celebrating the love of the bride and the groom. Here is a translation of the lyrics:

I wish a good marriage for the bride and the groom
I wish your marriage to mix like water and milk
I wish your life to be full of love, peace, and health, and to have children
like the marriage of Abraham and Sarah, to be blessed by God,
to tackle any challenge together, and to be successful in your lives.
And I wish you the best for the rest of your lives.

The EP will be released on September 11th on Music in Exile. Preorder it here.

Gordon Koang offers “Coronavirus”, a shot of optimism in the...
News