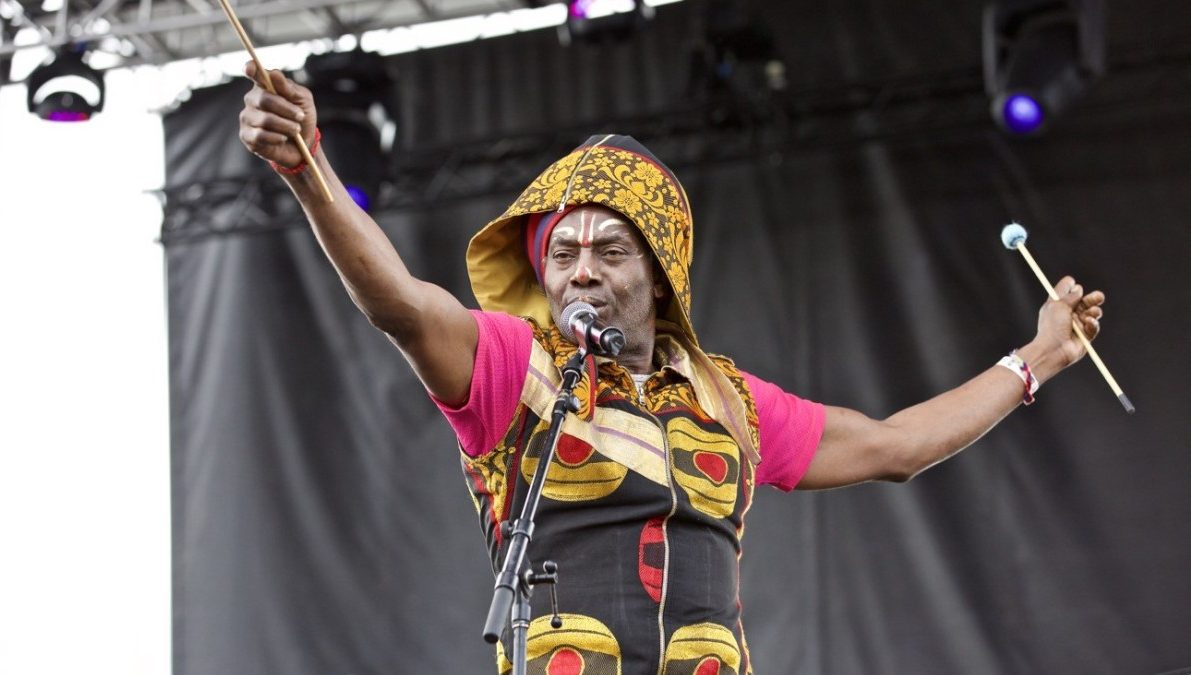 In this second part of the interview, Martin Perna and Duke Amayo, two of the historic members of the Antibalas band, talk about the way the orchestra works, and the recipe for their longevity.

Find the first part of the interview here.

To sum up the first part of the interview, you are an American band playing afrobeat mixed with Asian martial arts and you have a Spanish name…

Amayo: Isn’t it interesting? (laughing) I needed to employ musicians who were bulletproof. I have the weapons, and I wanted to find some soldiers. That’s kind of how it started. Some of them were coming at my kung-fu school, and they became members later. It’s part of the neighbourhood and the community of Williamsburg. It’s where the story started, I had my shop where I was doing my clothing and my martial art, and which became Antibalas studio at some point. Then we got kicked out and when we left, I feel like I took my kung-fu school and my studio on the road. Antibalas members were my students. When I can express my sifu skills, I am doing it on stage or with the guys. I’ve been in this band for twenty years, and it brought out three words for me: deep unconditional love. It’s always around. With the timing of now and what’s going on, all of a sudden, I realize some of the solutions for the planet. We, humanity, we all need to go back to our childhood.

Kids don’t have any problem!

Amayo: Yes! Kids are playing, they are innocent, you know what I am saying? If we could go there regularly… The repetition is important, because if you repeat that, you don’t have to feel pressure, you don’t have to be a boss or a politician. Even bad politicians are humans and have mothers who probably took care of them!

Even Donald Trump was a baby…

Amayo: Yes, but a baby without a mother and that’s why he’s angry! (laughing) That’s why I am always trying to invoke the deep unconditional love. We need to mother each other. We need to mother people like Trump! He’s forgotten, and this concept is completely gone for him. We need to think like: “That’s my son and I think he needs major help”. 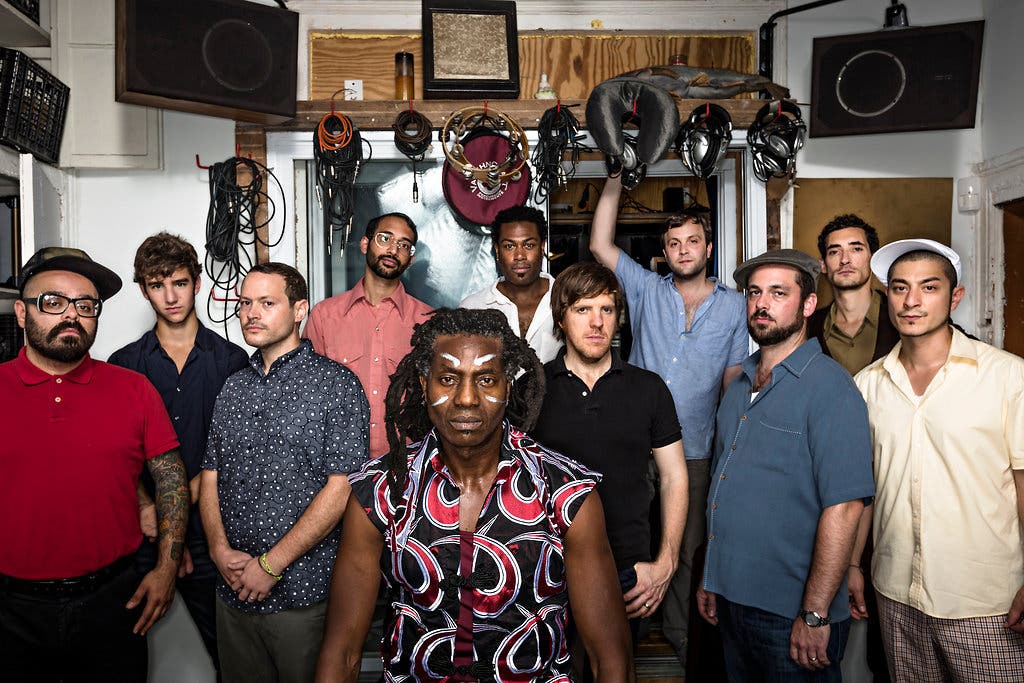 It looks like there is a big turnover within the band. Even in your Wikipedia page, there is a timeline with the different musicians. How do you deal with such movements and how do you manage to keep the Antibalas identity and sound?

Martin: How does France keep on winning World Cup with a different team? (laughing) It is the same thing. More seriously, there is a playbook. In music, everybody has a role. If you join the band as a guitarist, you are not going to expect to play solo, because you are part of the music. You have to expect playing like the drummer. People have listened to us for so long that they know what to expect when they join the band. They want to honour the musicians who came before them and not be wack. There is a lot of musicians who have been in the group for a long time like Amayo, myself, Jordan McLean, Marcos Garcia… And some of the guys have been with us since more than ten years now.

Amayo: There is a definitely a generation of Old Gs !

Amayo: There are some compelling songs that ask for those things. When you are in a space that we have been, you kind of start realizing that there are some things you can still do. It is the end of patriarchy, as we are entering in the next generation. We found nice guys and ladies, but actually they were already there. All we had to do was just call the right persons. Sometimes, you see those opportunities opening up, through a friend of a friend or whatsoever. A lot of musicians who have been around in New York heard about the band through other musicians, because they like how the band is, without the leadership thing for example.

(Martin leaves the interview to install the merch, editor’s note)

You mean there is absolutely no leader in the band?

Amayo: I mean, there is actually a kind of leadership, but there is no “boss”. I might be the leader of the band, but I have to do it with caution. I get checked regularly. I push, then they push back, and I push back again… My push-back has to make sense! We are in a crew that rejects that concept. In martial arts, I am already used to teach in a certain way, because I come from a culture of master/students.

After 20 years, how often have you played in Africa?

Amayo: We haven’t yet! But we are about to. We tried five years ago because a friend of mine lives in Lagos. He used to live in New-York and he’s a big fan of the band. He saw an opportunity to bring Antibalas to Nigeria. Things didn’t work out very well but we really tried hard. With the temperature of the whole political world, it makes sense to try again and to go pay homage. You know, when we did the album Where the Gods were in peace, there is a song called “Gold rush”. And it is one of our strongest one. It was also a time where the band members were moving to other projects. That song has no lyric. It was also a part of me trying to figure out how can that song be part of those changes. There was also a song called “Tombstown” that I wrote a while ago, and it didn’t really fit the Antibalas model at that time. When the shifts occurred, I thought it was exciting to release or revisit those songs. I love writing trilogies. I wrote lyrics for “Gold Rush” and I think it was the time and a way to express reparation. We have to go back and fix the bad things we’ve done in the world, saying we are sorry. “Gold rush” became a way of me expressing the history, the fact that our ancestors took someone’s land is one of the reason why the economy is so bad. Our grandparents created the whole economy based on what we took from other people. Why don’t we give back those lands, to see how economy goes ? We cannot go forward until we fixed the past. If you had bad maths, bad chemistry, bad physics, every formula you are writing after will be wrong. We keep going and we get wronger and wronger.

Do you have any other musical side-project?

Amayo: Jordan McLean has a label, and I will release a solo piano album on it, of things I am doing at home, kind of meditation exercises on the piano. I will also play in the art gallery with an installation. As the album comes out, all of that is going to be dumped to the world ! 2020 will be a year of solutions, permaculture, green schools… I am building a school in Nigeria. Since my mom passed away, I am still trying to secure all the legal stuff. Everything is finally coming together, so it’s a great time to share and show who you are by doing the things you believe in. You are an activist ? Step up ! You are a dreamer ? Here it is ! You are a writer and need inspiration? Do it !

You collaborated with pop artists such as David Byrne or Talking Heads, and a lot of others … What do you think those people are looking for in Antibalas sound?

Amayo: I think they are looking for the horns section, and also our reputation as musicians. We are the kind of musicians’ favourite band. All of them are talking about the band. The rhythm section is also amazing but I think that the horns created that excitement with the other bands. Working with David Byrne specifically has been exciting, because we had two days of rehearsals, we had a whole bunch of songs with some other artists who have their own baggage. That experience was quite good, especially for me, because I was using my percussions skills to help out with the singers, the melodies and the backup singers. Then we played in Carnegie Hall, and it was a very special thing. Martin had the opportunity to arrange some of these compositions to fit in each artist’s request, which is another complex aspect of it all. The work taken from the experience of Fela’s composition, all those complex grooves makes every other music not as much as a work. This work prepares you for all the kind of stuff. The musicality of afrobeat creates a beautiful bed for all the other genres. We used our technique to bring our universe into another universe. My approach is to expand on the afrobeat spirit to understand the other universes.

If I want to have my own afrobeat band, what kind of foundations do I need? What is the recipe?

Amayo: You have to be ready to do it for a long time. You have to be patient because you will have to manage a lot of personalities, so you need to have a strong temperament. And you need to have heart ! Spirit and heart are basic stuff, they are very important. You gotta need a horn section, and maybe dancers, but you can find some in the audience if you don’t want to go the Fela way. You also need a killer drummer, like a Tony Allen freak and a good bass. Also, you cannot think only about you, you need to think about the whole band. If you drop your ego, you win.