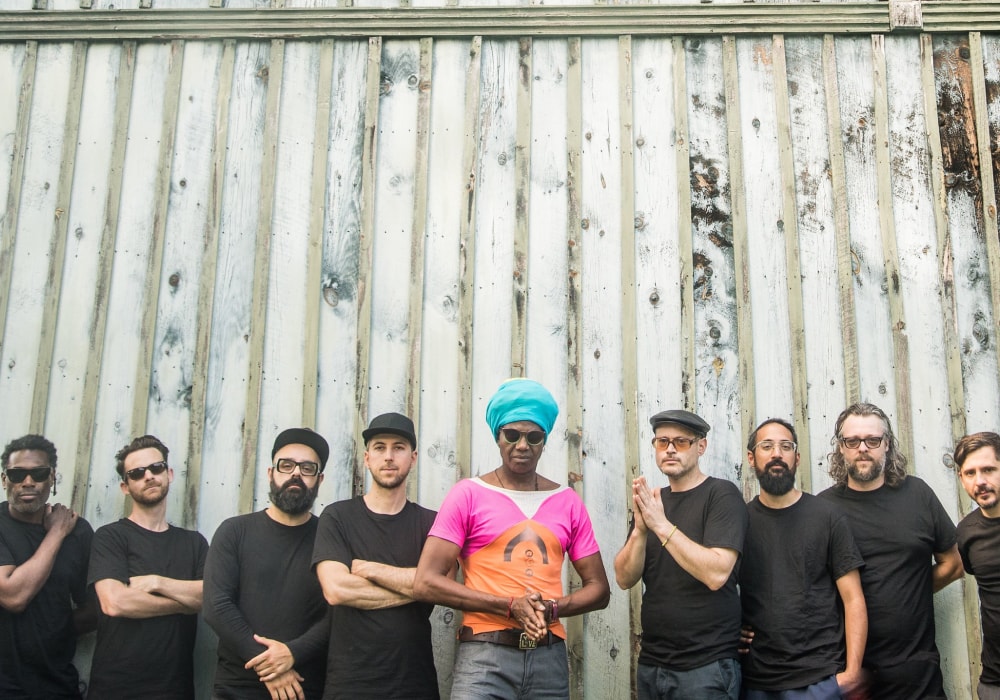 In 2018, the band from New-York celebrated its 20 years. As honorable heirs of Fela, the band is about to release a new record that draws as much in afrobeat as in ancient China. Kung-fu interview.

Since 1998, no less than forty musicians have shared the scene as soldiers of Antibalas (Spanish, “bullet proof”). Often considered as the best American inheritors of Fela Kuti (they were also chosen to accompany the musical Fela), the flexible crew has been attracting since its birth the very best of the NY and worldwide music scene to master the afrobeat sound through six albums and countless concerts.

Martin Perna and Duke Amayo, founders and core of the group, took a break in their tour to share a piece of their history. In the courtyard of the Maison Folie Moulins in Lille (France), the two experienced musicians bring up successively the philosophy of martial arts and their modern vision of afrobeat: the two breasts that fed their next album, which promises to be exciting.

You celebrated your 20th birthday last year. The band was created in 1998, one year after Fela died. Is this a coincidence?

Martin: The original members of the band participated on a LP project called The Daktaris in collaboration with musicians from New-York, Ivory Coast, and Cameroon. The drummer had played with Fela’s Egypt 80 and Manu Dibango before. This band was a studio project. I also participated to this project with the members of Sharon Jones and the Dap-Kings. Afterwards, I wanted to do something else with latin and african roots, carrying a message. This Daktaris project started in 1996 with the album Soul explosion, so I actually dreamt of the concept before the death of Fela.

It is definitely a coincidence. Anyway, did you have the feeling to take his work over?

Martin: After his death, the afrobeat could not die with him, we needed to keep on doing afrobeat. At the same time, I don’t consider it being a direct tribute to Fela. It is all about the style and the possibilities of the sound. It is not only about worshiping him, it is more like wondering what we can learn from him, what can we do with this musical technology to tell our story.

Antibalas may be the best American incarnation of afrobeat nowadays. Do you feel like keeping this bridge opened between Africa and America?

Amayo: Definitely, that bridge has been crossed so many times, speaking of diasporic music and consciousness. Music is the first thing which is able to keep this link alive… In this DNAge, seeing how things have evolved, there is still that constant back and forth bridge between one genre and the other genres. Everybody gets inspired by one genre, taking the best of it, and then trying to create a new genre, specifically with afro beats which recently evolved especially with Nigerian artists. You go to the root of it, even that itself is coming from the same source. When you listen to those artists you can say that they are borrowing from the same source, taking a little bit of Fela.

Martin: You can imagine that Africa is like a ping-pong ball. Maybe it goes to London, maybe it goes to New-York, then it heads back to Lagos and goes to Dakar. And New-York hits it back to Brazil and Brazil hits it up to Jamaïca…. That’s literally how these rhythms travel! 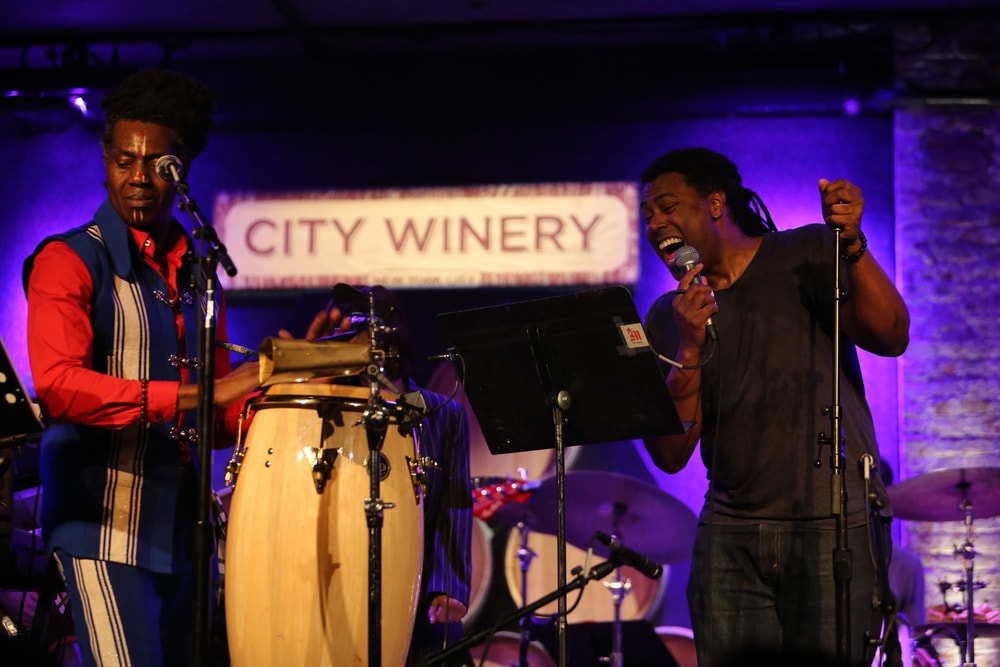 Do you think that Africa takes inspiration in the United States, exactly the same way you are picking ideas from Africa? How is it evolving there?

Martin: Sure! Look at the James Brown influence in Africa, look at Nas or Alicia Keys. Now I think there are more Nigerian kids who want to be more like Jay-Z than Fela. Or maybe they will become a combination of both! It is not like every kid is trying to put together an 18-piece band. They are probably wondering what is the perfect beat, where is the producer, what is the fastest and most efficient way to get a signature and a story out there.

Amayo: They do not especially need to hire a horn section. Maybe they can have their own horn section with a keyboard! They try to commodify as best as they can you know. In terms of what we represent with Antibalas, we just try to hold on to the standards, to what made it compelling, to the original thing that made it exciting. Obviously we could put a spin to anything but there was a conscious decision to stick to that time, to stay encapsulated in that period.

Does it mean that there is a kind of nostalgia in the mind of Antibalas?

Martin: When we compose a song, we are not trying to make it sound like if it was a nostalgic piece written in 1973. We might like certain ways that a piece written in 1973 swings, we can feel a groove, but we are trying to make new stuff, reflective of the collective experience. In the afrobeat of the 70s or the 80s, they did not talk about sexual harassment, there was not any language around different types of social justice. As artists, we have to put that in the music. There were certain ways of being political, and we have seen how 50 years of a certain type of activism has been productive. We can only make a shift with our music. It would not be revolutionary to keep on doing it the same way.

As musicians, in our repertoire, we try to have enough of Fela’s tunes just as a jazz artist could have some Miles Davis, John Coltrane or Duke Ellington tunes. It’s exciting to interpret them and play our own stuff. We are doing this for so long that I think that nobody can say that we are trying to copy something. Every new album is a whole different world. In the next record, you are going to hear a whole other sound.

Can you tease a little on this next album coming up?

Amayo: It’s a bunch of music that I had slowly made compelling. I had this nostalgia, because I am an instructor and I wanted to continue teaching, but the work with Antibalas was so monstruous… I am specialized in Chinese lion dance and grooves. Those grooves became the template of the album. I also started to re-examinate my culture, and my childhood. I come from Nigeria and I can feel there was a lot of Fela, I can remember some of the melodies and being around a certain kind of groove. All of that became the source in trying to make this soundtrack. I teach kung-fu classes to students, so I put all of this into the songs as well.

In concrete terms, how can you put teaching into music?

Amayo: You have to take class with me to understand! (laughing) Every move is rhythmically designed and it has a certain kind of tempo. As a martial artist, when you move, you need a soundtrack. Most of the time, you are attacking in threes. You don’t hit once, you have to strike three consecutive movements. Those trilogies are the basis of this art. Those are rhythmic shapes, shapes of a form or name of the songs. “Fist of flowers” is based on martial art movements for example. All of this took some time to develop. In every martial art form, you can learn a movement, and this movement has to be repeated for 3 or 6 months before you can master it. In my head I was thinking that I wanted to marinate, to repeat for 3 months. As an example, it took me one year to write one of the song of the album. I took little parts and I just looped them in my head. I have no other way of approaching songs, it is natural for me. Being with Antibalas is also a way to gage something that rhythmically makes sense. Everybody is helping me to make those songs alive. It took some time to marinate, now it is ready to come out! This next album will give a complete look of what happens when you bring afrobeat in contact with kung-fu. I am really excited. When you will hear the songs, you will feel something! The words are just mantras, about things I have been doing or things I believe in. I didn’t want to make them in the DNA of Antibalas, it was important for them to exist independently.

Are you going to show some of these moves on stage?

Martin: You can look at a Fela template and say that it’s just a new set of melodies and basslines on this template. This drawing is composed of different compositions of sources, like he was saying, all the things are grouped in numbers. In certain songs, it might be the East meets West elements, or it can be more Chinese, with a gong at the beginning, like in “Fist of flowers” again. The lyrics are leading the dancer. You are being instructed to the movement, it is like a mantra. I think it has a timely historical moment. China is everywhere right now, especially in Africa. In that kind of connection, you are talking about bridges, highways, armies and oil, but this is not only what the artists have to say. It represents another possibility of conversation that needs to be around the table, what are the other possibilities given by the East meets West. It could just be another colonisation 2.0 or it can be something amazing, because China is the birth of civilization! It is important to have another vision and not just say “oh you are bad or foolish because you want to be here”. It is exciting to contribute to something that is part of this very timely conversation. China is ruling the world right now, especially in USA! We don’t have to repeat the same conflicts of the past. This could be really beautiful, but it is up to the artists to imagine those possibilities because when the two leaders get together, it is more like “how am I going to fuck this guy and be fucked in return?”, and everybody knows there is no need to do that! It is an exciting moment and I think people understand that it is not only African music, but global music.

Is it the main political message of this next album?

Martin: Since we have reached this turning point, we know that the leaders are turning this bad. It is like things can only get bad before they can change properly. Here is an example of where things could start changing, looking at the beauty of it. We are kind of jumping ahead of that, saying that this is what is happening after we decided to get together. Instead of looking after a late solution, we are looking at how it could look like after we have solved the crazy part of it. If you dwell so much on the past, what you are going to get is the past… If you spend more time about building a new future for yourself, you can absolutely manage that. We are part of a movement, part of some messages, we are all steadfast through our activism. Still protest, but protest with a different jacket. Don’t wear an army jacket, wear a bulletproof jacket, carry a shield and a spear, that is the kind of attitude we are trying to distill.