Afrorack: the body to the machine

Brian Bamanya aka Afrorack built Africa’s first DIY modular synthesizer, in Uganda: he foresees that the next revolution in electronic music will take place in Africa.

Brian Bamanya radiates pride. A few days after a show at the Atlas Electronic Festival in Marrakech, the 30-year-old producer plays at home at the Nyege Nyege Festival, inside the jungle of Jinja, Uganda. Broadcast live on Boiler Room, Afrorack’s performance sparked the curiosity of the audience, journalists but also his fellow artists, fascinated by the Ugandan’s multicolored-cable installation: Afrorack crafts his homemade acid-house on the continent’s first DIY modular synth.

First developed in the 1960s in the United States simultaneously by Robert Moog and Donald Buchla, the modular synthesizer was quickly adopted and popularized by experimental and passionate musicians-scientists, from Zappa to Portishead. Behind its cable-heavy exterior, is a set of independent, complementary and customizable modules – oscillator, amplifier, filters and envelopes – which, depending on their architecture and how they are connected (“patched” being the technical term), produce unique sounds that are infinitely adjustable.

While most of his pride can fit into a suitcase, Afrorack is well aware of the impact of the contribution to African electronic music. “With the exception of a few rare fans in South Africa, it’s absolutely new here. And since our heritage does not come from Detroit, Chicago or Berlin – but from our own musical traditions, I am convinced that the next electronic music revolution will take place in Africa,” he says. 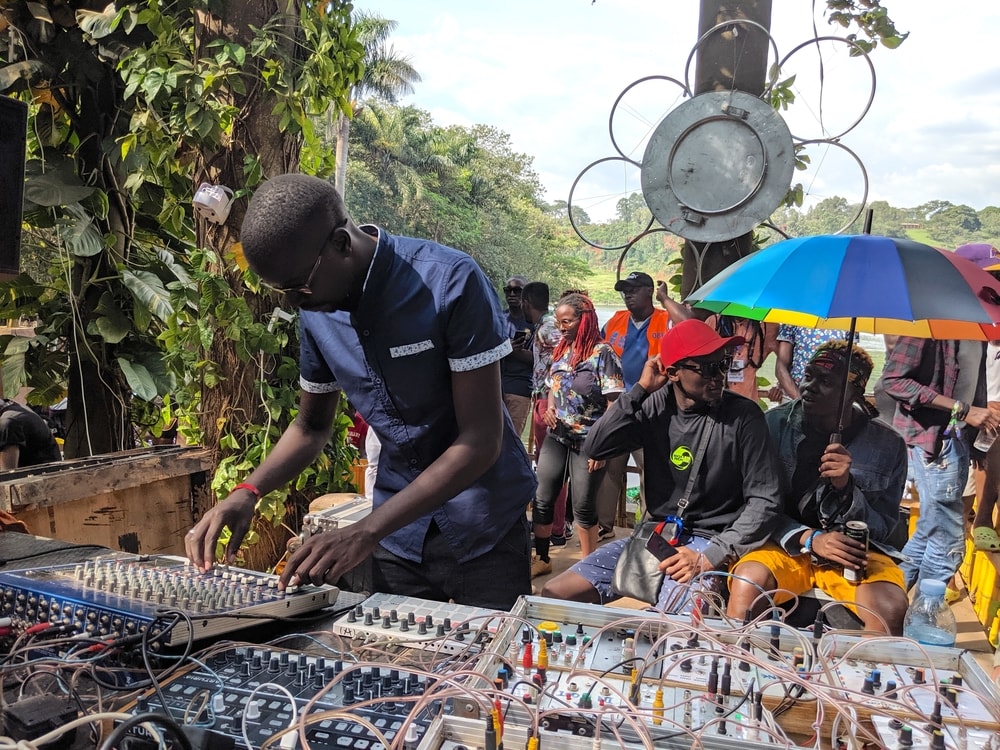 Afrorack before his show at Nyege Nyege Festival @ Jeanne Lacaille

“It’s a hobby for the rich,” laments the DIY craftsman, back in Kampala, in the living room-laboratory of his house on the edge of the city. In the age of the fast-and-cheap, the popularity of modular technology is surprising as it is neither one nor the other. Although manufacturers like Behringer are working hard to make the field of modular synthesis more affordable by producing US$ 49.99 modules, according to a post by the boss of the company, Uli Behringer, published on Gearslutz forum – the purchase of a box and modules often reaches several thousands of dollars and under these circumstances, the instrument does not seem to be the best accomplice for recreational use. But it took more to discourage Afrorack who, having discovered the modular galaxy in the mysterious corners of the internet and realized that he was the first in East Africa to embark on that path, made a simple observation: if one cannot afford to buy their new obsession, they have to make it themselves.

In the spring of 2018, Afrorack began a patient observation of the Ugandan capital’s computer repair shops, relying upon tutorials and a strong penchant for hacking, he eventually found the right combination. A (huge) spring reverb, old cables, recycled electronic components acting as an oscillator… and six months later, the beast was operational. Although its design was quite similar to the Eurorack standards (modular system rack format designed in 1955 by German musician and engineer Dieter Döpfer) it was nonetheless a real technical achievement. This was the African-style, hence the name… Afrorack.

“The charm of DIY lies in its power of emancipation: you are able to build yourself an instrument so you are able to create music. I find it very anti-consumerist and I like that a lot,” muses the former guitarist. “A modular synth is akin to a living organism and, as for the human body, you have to find a certain harmony between the different organs. My system is purely analog, so it has a very organic behaviour. This is great, because I love being surprised”, he adds with a childish smile on his face. Afrorack’s own neighborhood serves him well: the electrical power system is so versatile that the same identical patch on the modular synth never sounds the same. A perfect flaw for pushing the limits of sound design. 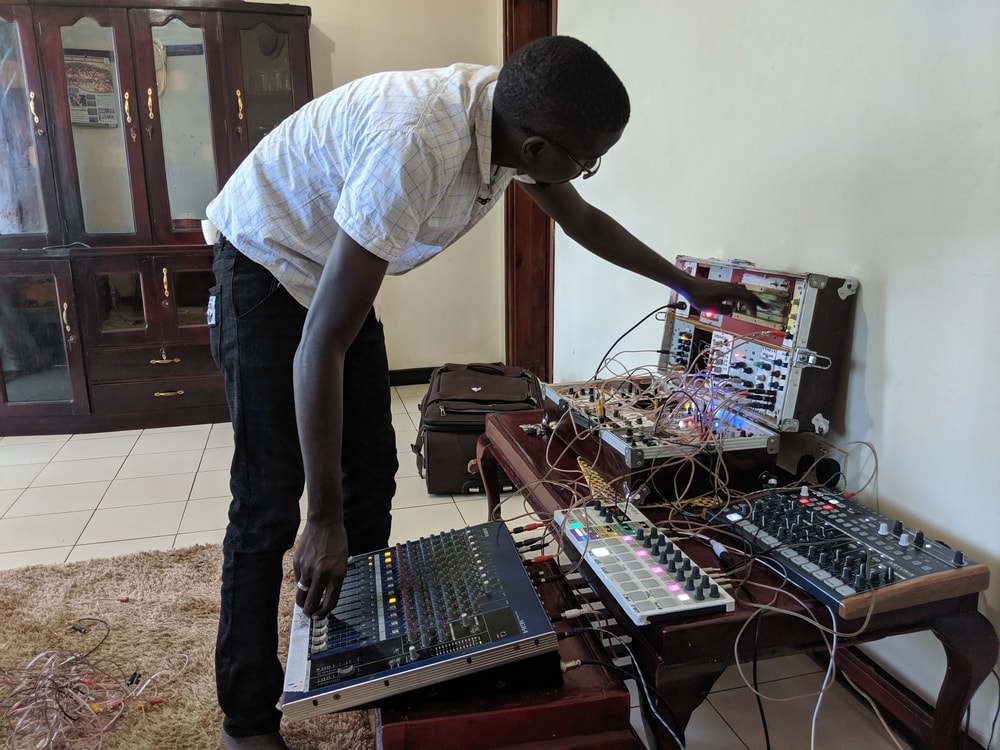 Afrorack at his home in his living room/studio @ Jeanne Lacaille

A skilled technician, yet Afrorack is still trying to find himself, artistically. “I am learning every day,” he humbly notes. Amongst the producer’s top inspirations are synth pioneer Bob Moog for his work on synthesis in the ’60s; Buchla and Suzanne Ciani for their innovative systems and their creativity; and Steevio & Suzybee and Dutch artist Colin Benders for their impressive ability to improvise. Although his acid-house still follows a rather common format, Afrorack says that he has been experimenting with a ton of different ideas: live jamming with traditional musicians, blending acholi or baxiga rhythms, etc.

“By exploring the links between acid-house and traditional Ugandan rhythms, for example, the modular synth can also establish a dialogue between cultures, and even create a new language,” says Afrorack. During his research, the enlightened obsessive comes across the complex world of algorithmic music, and more precisely the “euclidean rhythms”, studied by the Canadian researcher Godfried Toussaint. In short, you can program the synth sequencer in such a way that the rhythm will be similar to those of the vast majority of traditional music – except Hindustani, according to tests. “It’s really fascinating”, Afrorack concludes, adjusting his glasses. 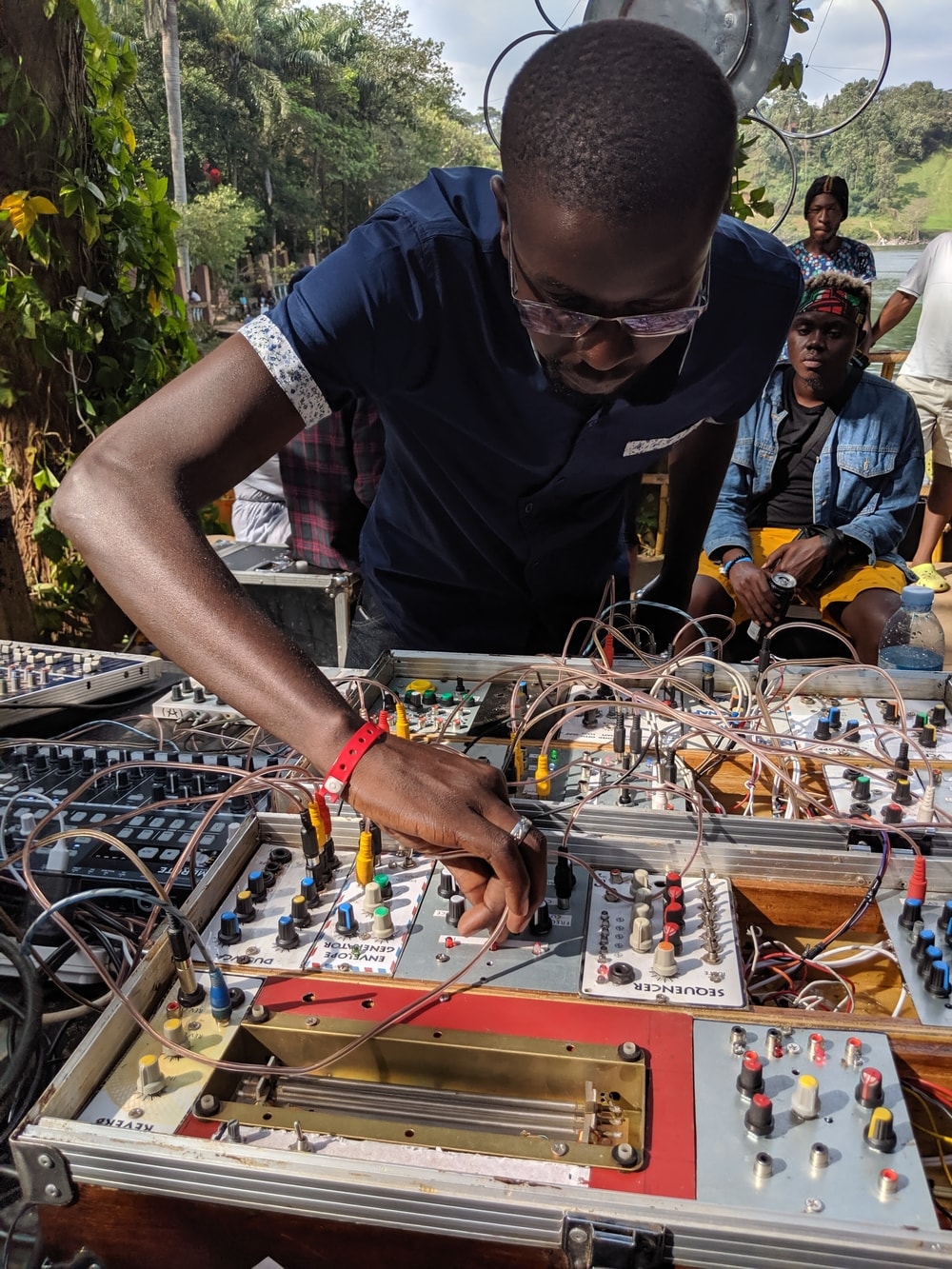 Afrorack during his show at Nyege Nyege Festival @ Jeanne Lacaille

Afrorack mostly improvises his sets. His approach is empirical and he lets “the machine dictate its own law”, so how does he see the live performance? He works a lot on it, for sure, and also “plans to meet other musicians who play on modular synths to refine [his] technique, develop [his] style and [his] knowledge”, he says, a few days prior to hosting Reunion-based producer and electronic maloya pioneer Jako Maron, also invited to the Nyege Nyege Festival for a circuit-bending masterclass.

While Afrorack was able to design his modular synth thanks to freely available plans and drawings that a community of enthusiasts willing to share their systems graciously uploaded on the internet, he admits he would rather commercialize his low-cost modules so he can fund his research. But the most important thing is “to stimulate awareness and inspiration among other artists so that they grab this great tool to make people dance”. And while Afrorack patches his installation between his couch and his wedding photos, his wife, Liz, is busy in the next room. Her business is cake design. And she confirms to us: they never get bored.

Read next: DJ Kampire, on the rise