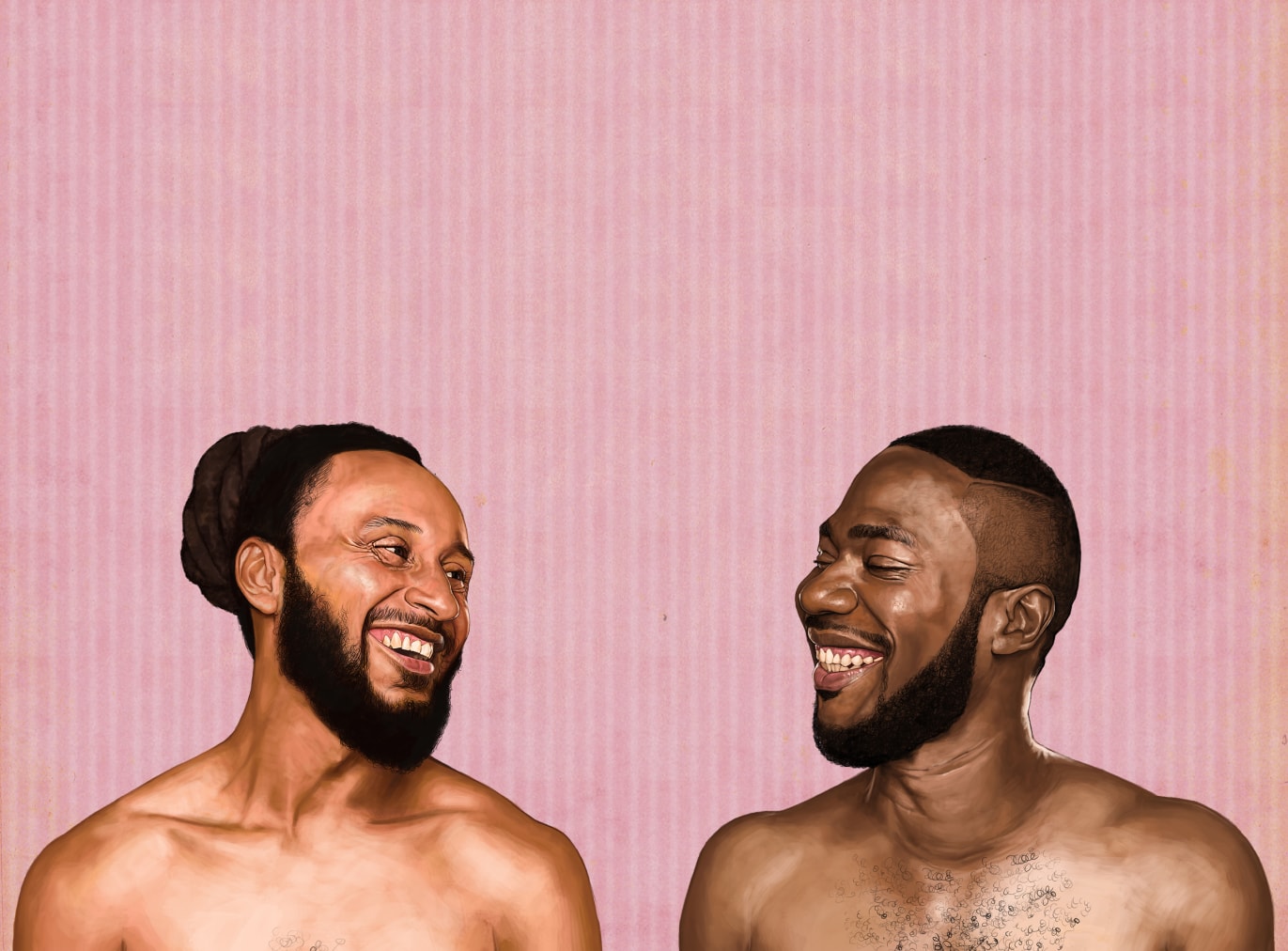 For the Ghanaian older generation that still speaks pidgin (the slang language of the English-speaking Africans), a “fokbois” is a rascal, a good-for-nothing. The Fokn Bois have managed to reverse the stigma with Afrobeats LOL, a dancing opus, between hiplife and ironic afrobeat. Though not being too serious, the duo eventually shows that the truth is sometimes better unveiled than left unsaid!

Barefoot on the stage of the Hasard Ludique, a Paris-based venue, where the Fokn Bois played at the beginning of March, Wanlov the Kubolor aka Emmanuel Owun-Bonsu, looks very relaxed. The gifted mixed-race artist, born in Ploesti, Romania, sings and raps, armed with a guitar and bells. His acolyte, M3nsa aka Bondie Mensa Ansa, the band’s vocalist and keyboardist, introduces the songs in English, while distilling here and there sentences in French. Beside them stands Hungarian talented keyboardist Andras Weil – the obruni (for “white” in Ghana’s Twi language). Akwaaba, “welcome” to the world of Fokn Bois! The term has two meanings: “When your grandmother calls you ‘foknboi’ it means no one could expect anything from you,” says Wanlov. “On the other hand, when it comes from one of your friends, it is a way of saying that you are cool!”

The school of the silver mic

The Fokn Bois adventure began as a schoolboy prank: “We met each other when we were boy scouts in the mountains,” recalls Wanlov. But the real meeting took place in 1997 at Adisadel College in Accra. “We realized we liked the same music – Fugees, Busta Rhymes… We would skip the same classes together. The school did not stimulate us as much as rapping”. The two friends, as much crazy as creative, had to get along: “I’ve always listened to a little bit of everything,” says Wanlov, “reggae, hip-hop, Ghaneian high-life, but also classical music for cartoons, gypsy music from the Balkans…” M3nsa, the duo’s “beatmaker”, has been living in the UK for almost 20 years. Growing up in Ghana, he literally wrecked his brothers’ decks, who were record collectors, as well as jazz and hip-hop fans: “My father is a filmmaker and a musician. My grandfather is also a musician. It was not strange for me to take this orientation.” In 2010, the Fokn Bois founded this odd tandem, by signing the music of King Luu’s musical Coz Ov Moni, in which they hold the leading roles. Two years later, they released their debut album FOKN Wit Ewe, and in 2016 paid tribute to their country with their Ode to Ghana.

With the Afrobeats LOL EP, the Fokn Bois switch to an international scale, without losing their eternal sense of self-mockery. Their Facebook page states that they play “porn gospel”… The title, “Afrobeats LOL”, falls into this unconventional sense of humour: “We were not sure what the word afrobeat meant,” admits M3nsah. “We are big fans of Fela Kuti. Over the years, afrobeat has become a music with a more prominent sound. Today, the artists claiming this movement are lighter, more romantic and true fashion victims. With our satirical proposition, we wanted to make fun of this trend. The joke is that we are not afrobeat artists at all: ‘Afrobeats LOL’. We made an afrobeat album with much seriousness, well produced and designed… that you shouldn’t be taken too seriously!”

On “Wo Nim Mi” which means “Do you know me?” in Twi language, the two acolytes scratch the superficiality of their generation, thirsty for immediacy and ephemeral glory they can exhibit on social networks: “Now that I became rich, famous and popular, you remember me and you want to be my friend,” tackles M3nsah. “It’s about people who do not want to support your dreams…” In a verse, M3nsah says, “Right now we’re having fun at a club in Bolga,” the abbreviation for Bolgatanga, a city in Northern Ghana. “It’s a city with a non chic image, considered undeveloped,” says Wanlov. They say that even if you have notoriety, you go to places where celebrities are not supposed to go. For M3nsah, this unorthodox approach is an alternative to conformism: “We have a very personal idea of ​​what success is. As outsiders, we make our own parties in Bolga. Sometimes people do not understand it… until it works out for us!”

On this track is featured Medikal, a newcomer rapper in Ghana, part of the hiplife movement, the local hip-hop. Mr Eazi, another rising star in his country, Nigeria, rapped on “True Friend”. On the very ambiancing track “African Holiday”, Dex Kwasi, a young Ghanaian artist brings a more Afro trap vibe, with Sister Deborah on backing vocals, a singer and a TV host. She is also Wanlov’s sister: “I told her that if she did not sing on our album I would tell our mother!” he jokes. But the guest star is called Gyedu-Blay Ambolley. The Parisian audience discovered him for the first time last February at New Morning during a show that will go down in history. In the ’70s, the highlife saxophonist was a precursor of rap with his own style, called simigwa, also the title of his 1975 debut album, reissued by British label Mr. Bongo Records. “For us, he’s a mentor!” Wanlov says, proud of their guest.

The sound signature of Fokn Bois is both “diasporic” and very Ghanaian. “This is pop music, so there’s an obvious Western influence,” M3nsah admits. “It’s interesting because what is considered pure Ghanaian highlife was created by the diaspora,” continues Wanlov. “In 1966, there was a military coup that overthrew Kwame Nkrumah, and installed curfews. Many Ghanaian musicians have migrated to Hamburg, Germany. Though they used German synthesizers, when you listen to this music you can say that it is Ghanaian. Apart from the truly traditional rhythms, the other music came from hybridizations, from different parts of the world. There clearly exists a ‘diasporic’ afrobeat sound.”

The EP Afrobeat LOL is also about identity and the phenomenon of the “repats” (as opposed to “expats”): the Africans or Afro-descendants who go (back) to live in Africa. The opening track, “Abena (Tanya)”, tells the story of a young Ghanaian girl who changed her name when she moved to the U.S.A. As a symmetric narrative trick, the EP’s last song “Abena Repatriation” explains that she is asked to return to her native country to pay her debts to her kins: “Abena, come back, we miss you! But when you come here, bring us the latest smartphones and trousers.” Casually, the two artists denounce a certain hypocrisy. “Our local politicians say that next year is the ‘year of the Return’, and call African-Americans to come to Ghana…” says Wanlov. “But what are the politicians doing in Ghana? They steal from citizens. They want to take advantage of the diaspora. We point out both the selfishness of our intentions and at the same time we remind that we must not forget our own place!”

One thing is sure, the Fokn Bois will continue to swim against the tide: “Because of marketing and TV, when Ghanaians have money they go have fun in European countries or in the United States – New York, Los Angeles… We’re going in the opposite direction.” Wanlov points. “We try to make our people aware that we can enjoy life everywhere, especially in Africa. I traveled a lot in Ghana, but I only saw a small part of it. There is so much to explore, not to mention the rest of the continent. It’s time to reinvesting ourselves in it!”

And if you missed the duo during their last concerts in Paris, Bordeaux, London, Glasgow or Accra, do not panic! Other projects are in progress: a follow-up to their first album Fokn With Ewe, a musical film not yet completed for budgetary reasons, and an acoustic live album. “We follow our own ideas and we wait to see which one eventually takes off!” smiled M3nsah. Work in progress…

Listen to Afrobeats LOL on your favorite platform.

More Fokn Bois in our playlist Afrobeats, on Spotify and Deezer. 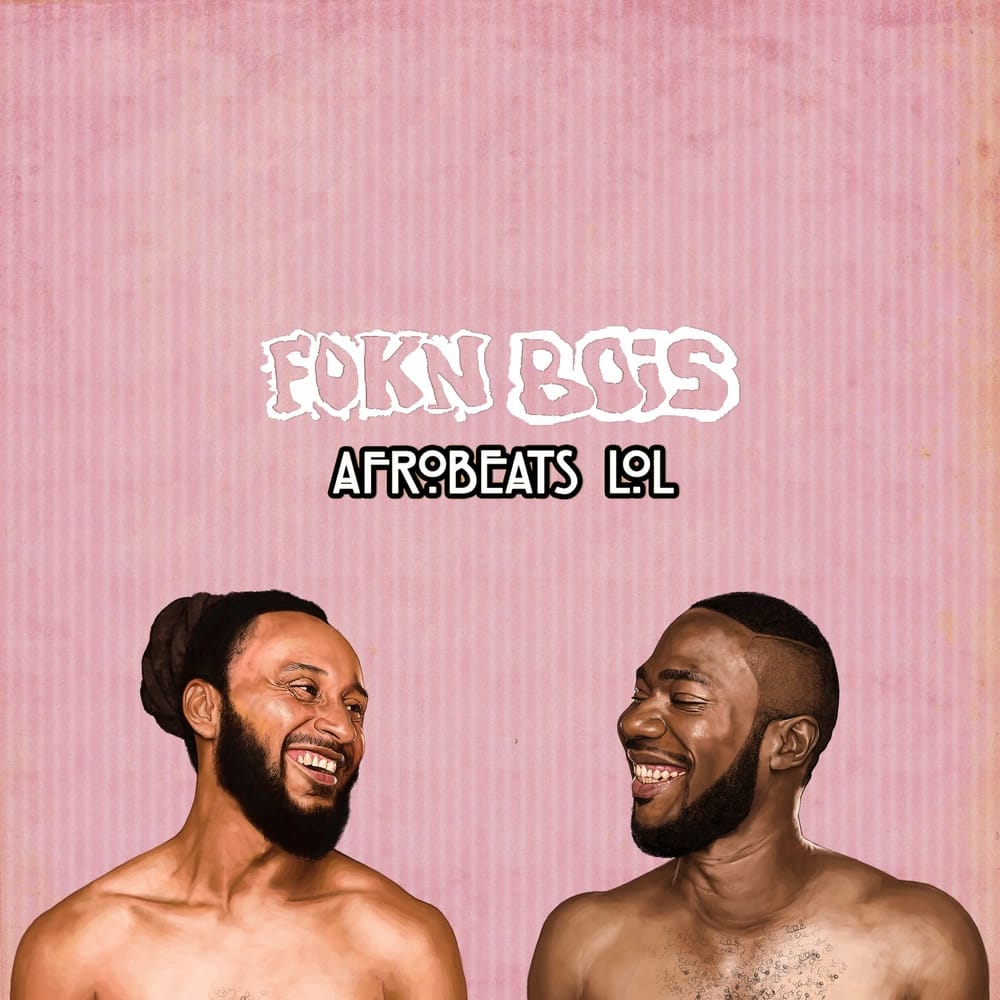