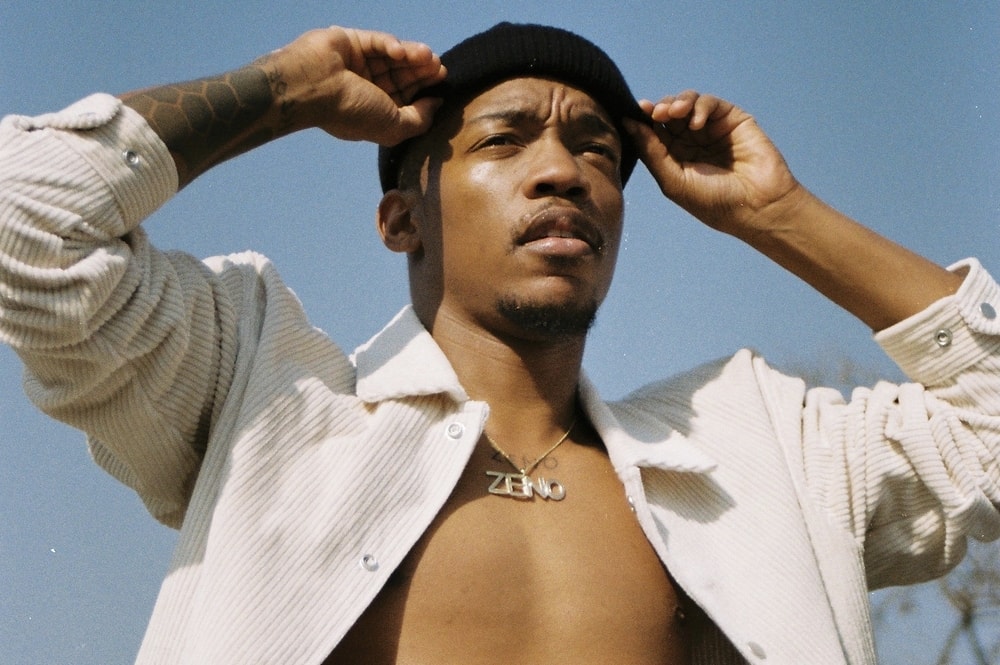 From revelation to confirmation – the South African producer Muzi is back with Zeno, a real and uncompromising concentration of shining Zulu house. Gathering around him the new guard of the South African electro scene, he intends to prove that the Rainbow Nation can shine all by itself.

“I cannot believe it,” admits Muzi, rubbing his eyes, tired from a long European spring-summer tour that ended with a crazy party on 13th July on stage at Afropunk Paris. Hailed by Stormzy and Diplo for his blazing kwaito and Zulu syncopations since Boom Shaka in 2016 – named after the pioneers of the genre – then with the bold Afrovision in 2018, the producer has quickly become unavoidable. He even participated alongside FAKA and Sho Madjozi on Damon Albarn’s album Africa Express, dedicated to the spirited southern African electro scene.

Zeno is about to be released, and it is a record so shaped by Zulu house hits that it confirms Muzi’s artistic precision. With a striped polo shirt and a baseball cap, the young man doesn’t seem at all out of place amongst the trendy decor of the vegan cafe from where he speaks freely, a glass of water close at hand. But Muzi started a long way away from here.

The story starts in Empangeni, a township two hours from Durban in the heart of KwaZulu-Natal, the cradle of Zulu maskandi folk music. Despite living in constant “survival mode”, his family were great music lovers. His mother was a gospel and opera singer, his brother rapped in the neighbourhood, while his father collected vinyls – everything from Daft Punk to Hugh Masekela. The massive percussions of traditional Zulu rhythms are expressed daily in Empangeni, on the streets and during ceremonies. Shy, this skater boy observed and absorbed what would become the eclectic backbone of his future productions. 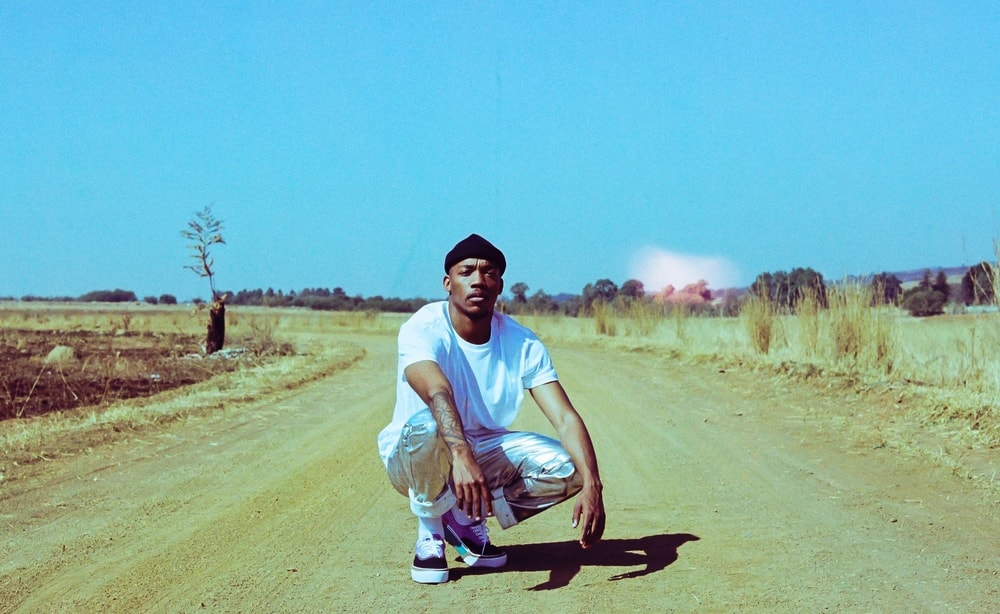 “Violence also played a major role for me. The township was not quiet and my mother imposed a 5pm curfew. So I had all the time in the world to make music” he recalls, before adding in a serious tone, “I never thought I would leave Empangeni one day.”

From an old 40GB computer and Fruity Loops software – which he still uses today – were born Muzi’s first productions. After a few badly paid DJ sets between Durban, Johannesburg and Pretoria, he would soon cut his teeth in Berlin, “where the electro scene is sharper and less commercialised. It was an initiation, a pilgrimage that allowed me to discover myself but also to understand that it was in Africa and for Africa that I wanted to make music” he breathes.

“My roots mean everything to me” says Muzi who sometimes wears a traditional Zulu belt on stage. For fashion? “My mother is a Zulu from Zimbabwe, my father is a Sotho from Swaziland. It is a sin for us not to honour our ancestors and to forget where you come from. Music is a very spiritual experience for me; it’s something much greater than the self. Inspiration often comes to me in dreams. Spirituality must be cultivated…and you are the temple. I try to remain humble” says Muzi, very seriously. There is no doubt that the producer knows where he comes from. In Zeno, from “Good Vibes Only” to “Zulu Love Letter”, the choruses, rhythms and percussions are indisputably rooted.

Moreover, Muzi knows his classics. In May 2019, the producer released Stimela Segolide (the golden train), an EP inspired by the train journeys of his father and other workers, far away from their families during apartheid. Even though he didn’t experience this period, Muzi nevertheless knows that the road is long for black people in South Africa. While there, during #MuziMondays on Youtube, he paid homage and remixes to the major figures and pioneers of the anti-apartheid struggle, whose legacy he honours, including Busi Mhlongo, Letta Mbulu, Brenda Fassie, Hugh Masekela and Johnny Clegg.

“I have respect for Detroit and Chicago house, and that sparkling thing that makes you think of Kaytranada and Los Angeles guys when you listen to my music, but just listen to the South Africans. Everything is there! Harari, for example, is Daft Punk before Daft Punk!” he exclaims, warming to his theme. As with Afrovision in 2018, Muzi invites a lot of talent and his South African peers to Zeno, such as Espacio Dios, TeMple, Sjava, BlackRose, Una Ram’s and Tiro. It is not enough for him to only support the young South African scene that is brimming with energy and fresh ideas, breaking down the barriers dividing music, fashion, videos and entrepreneurship. Muzi admits that he also wants to change a reductive view that he hates, which tends to reduce African music to three artists.

“African art is so rich, I just want it to be as respected as the others,” concludes Muzi who – dedicating Zeno to his daughter “so she thinks her dad is cool” – doesn’t have anything to worry about. 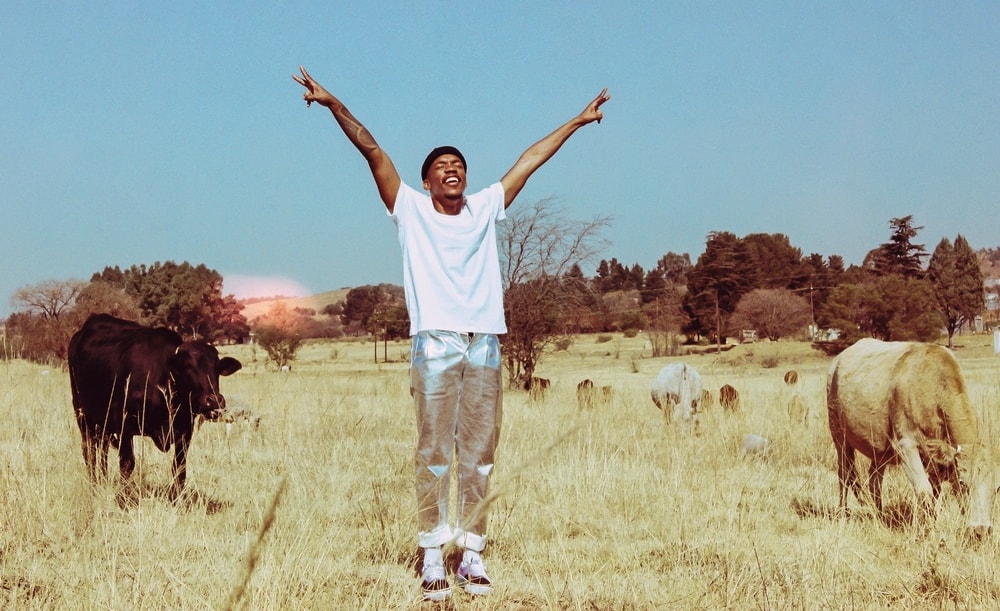