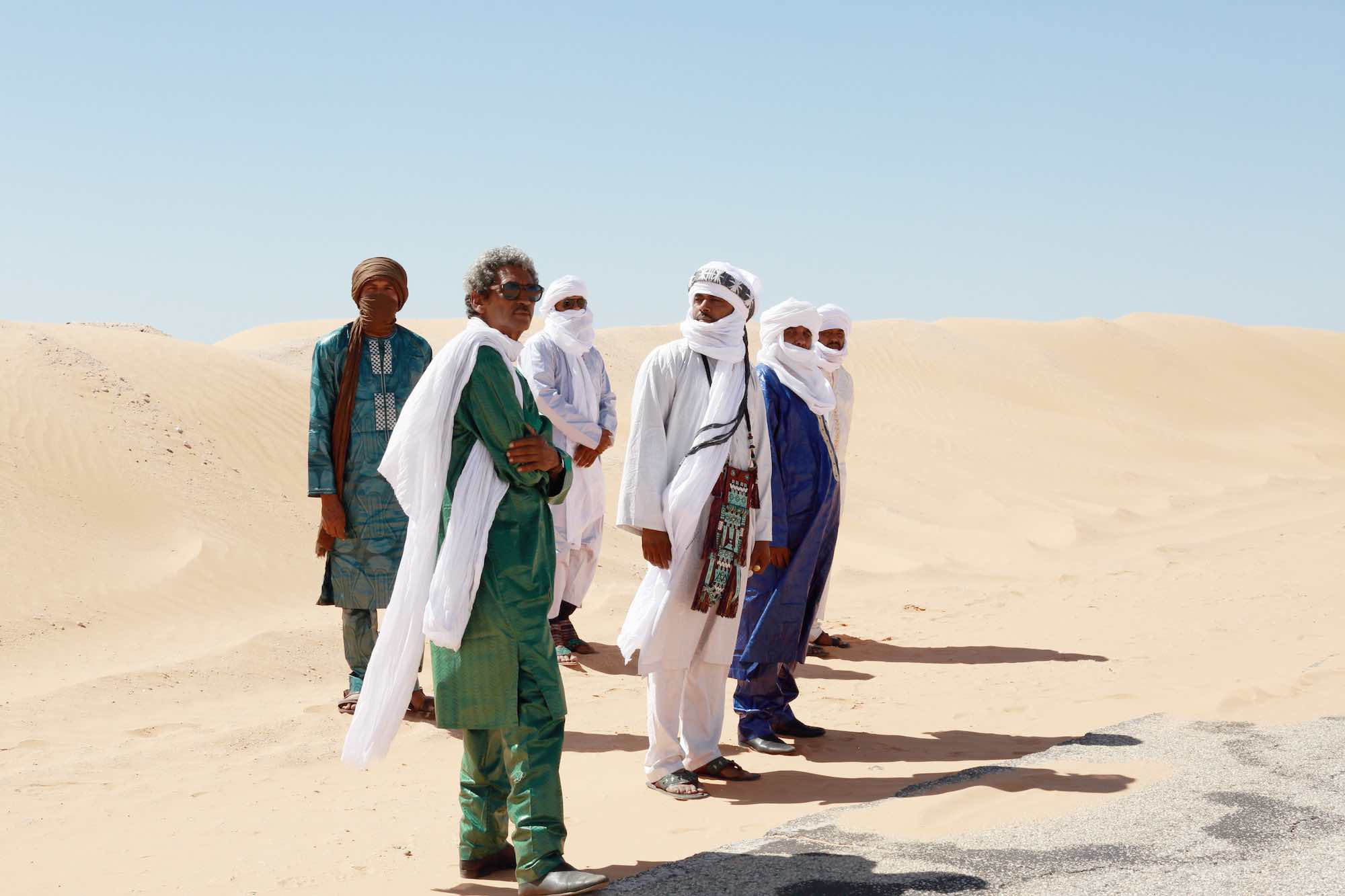 Since their first cassette tape in 1993, Tinariwen has been cultivating a sound, a cadence, and an art of resistance whose splendour and integrity can be heard on Amadjar, the ninth nomadic album recorded in the Mauritanian desert.

Twelve days: this is the time it took to the most famous blues caravan in the world to cover the 3000 kilometers of Sahara desert that connect Taragalte, in southern Morocco, and Nouakchott, the capital of Mauritania. As with previous records – Tassili in Algeria and Emmaar in California – it is in nowhere else but the desert that Amadjar’s 13 tracks were recorded. As night falls and the fire crackles, Tinariwen once again probe the melodic power of their guitars in the folds of the friendly dunes while the conversations – incorporated as intimate fragments of this great crossing – show what they’re made of (with or without the record industry): an irreducible Tamasheq identity, a visceral nostalgia, and a rebellious and poetic world view.

Originally from the Adrar des Ifoghas, a desert massif located between the extreme north of Mali and the south of Algeria (sadly, today, in the hands of jihadists and traffickers) Tinariwen have been active for more than twenty years, gaining the respect of Santana and Robert Plant, and winning a Grammy in 2011. The desert remains at the heart of their songs, such as “Ténéré Maloulat” the album’s majestic opener, an ode to the source of Tamasheq poetry, whose ululations and choirs are called tende (traditional songs). ‘This trip made us feel like we never left home. A desert is an important place, powerful, very special. The weather is fluid, and energy circulates freely between nature and humans’, sighs Eyadou Ag-Leche, bassist and calm interviewee, quietly seated amongst guitars in the Gibson showroom in Paris after shooting a video session.

Tinariwen’s strings are not followers of fashion. Most often electric (and, in this respect, the blues of Ali Farka Touré), they invariably embrace the colours of traditional Tuareg heritage. In Nouakchott, the nomadic musicians have invited those of Warren Ellis’s violin (Nick Cave and the Bad Seeds). It is striking how similar they are to the imzad – the traditional violin played only by Tuareg women – and those too of country music, the American Micah Nelson on mandola and charango on ‘Taqkal Tarha’. The Mauritanian rocker, Noura Mint Seymali, heiress to the great Dimi Mint Abba, feeds the sound with her ardin (harp). Its tone backs up the record’s group chants and throughout the album, women are celebrated as pillars of Tamasheq culture. You might also meet guitarists Jeiche Ould Chighaly, Cass McCombs, Stephen O’Malley or Rodolphe Burger – Amadjar actually tells more than just a history of strings. Pointing to the passing stranger as a guest in Tamasheq culture, Amadjar offers a vision of the world where hospitality and sharing are non-negotiable. Tinariwen seems to opt for a simple strategy: include to concern.

‘You do not always have to shout loudly to be heard. We are resistant, and in music, the more discreet your political message, the more the real politicians are affected. It is a constant struggle’, adds Eyadou Ag-Leche. Ambassadors of a people deserted by a Mali faced with a helplessness that a powerless government cannot stop, Tinariwen prefers ‘the weapons of art, conscience, poetry, and philosophy to those criminals who are useless’ at defending the rights of the Tuaregs. It has not always been the case.

As early as 1960, at the time of decolonisation, the establishment of desert borders endangered the freedom of ancestral movement for the nomadic Tamasheq. If they heal the pain of exile with their penetrating blues, they also rebel, especially in Mali in 1963 to protest against land reform projects and the authority of President Modibo Keita. The brutal repression and repeated droughts prompted many families to leave for southern Algeria, Niger or Libya. This is where Tinariwen was to be born, in a Gaddafi training camp in the mid-1980s. With the vibrant ‘Amalouna’ exhumed from the sands, Tinariwen testifies to those years when anger drove its founders Ibrahim Ag-Alhabib and Abdallah Ag-Alhousseyni to take up arms – real ones – dreaming of returning to Mali to join the Popular Movement for the Liberation of Azawad, and fight for the self-determination of the Tuareg people. At the time, the young group released cassettes and calls for the revolt secretively, because ‘the Malian State banned our music, it did not support our disobedience! Musicians were sent to prison or executed…but you cannot imprison a sound’, smiles Eyadou Ag-Leche. After the peace agreements of 1996, Tinariwen abandoned the armed struggle but not the will to obtain ‘respect and dignity for the Tamasheq people, schools for our children, wells for our animals, and the right to graze on our territory.’ By devoting themselves to music, turning to Europe with its market and its promises, the former rebels intended to serve the cause well. 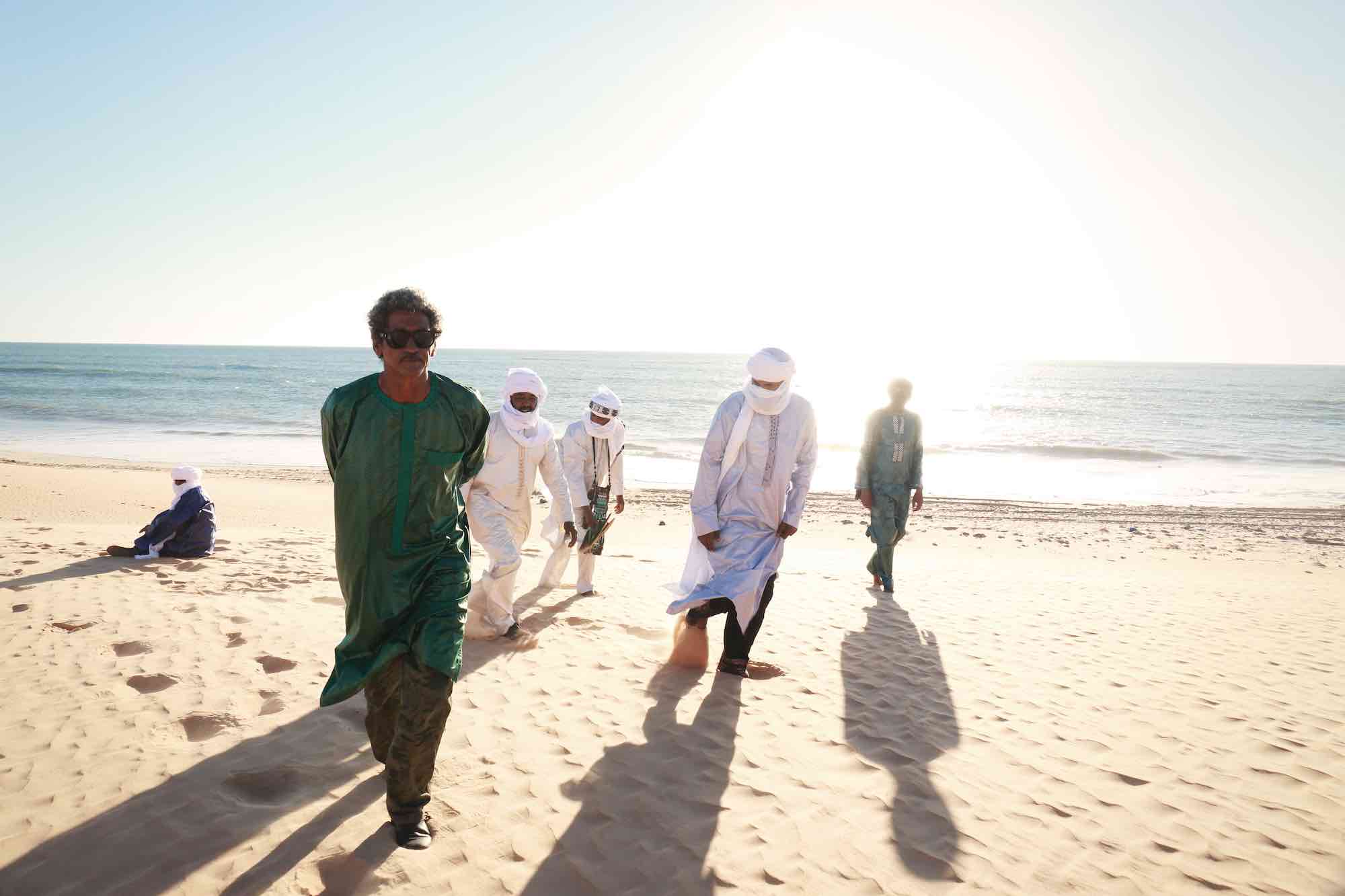 ‘But in fifty years we have not got anything for our people. In Mali, only corruption and violence are progressing.’ According to recent articles in the French newspaper, Le Monde, more than 1.13 billion euros were spent in dubious ways by the Malian authorities between 2005 and 2017, while the number of civilians killed in attacks increased by 300% between November 2018 and March 2019. ‘The Fulani and the Dogon massacre each other and we don’t understand anything! There are 130,000 soldiers in Mali, all the world powers are there, and they cannot make an area of 100 kilometers stable…apart from plundering the desert, did they come here for a holiday, or what?!’ exclaims the bassist, indefatigable when the discussion turns to the country’s chaotic news. He takes a hardline – charges the Malian authorities every time. He is less loquacious about the rivalries between Tuareg clans and the dangerous flirtation that some of them had with al-Qaeda during the rebellion of 2012. Take a stand. The Cause, before all else. What else is there to do?

If for the Malian intellectual Adam Thiam, ‘only disarmament and good governance’ can curb the torment of the Sahel, Eyadou Ag-Leche in the meantime advocates ‘music, a new generation at peace, and the customs of the people to make a difference’. In three stages, like Tuareg tea. Based in Tamanrasset, Algeria – like many former nomads – Eyadou Ag-Leche actively supports the group Imarhan, and the electric power of Tamasheq blues, while Tinariwen continues to amplify, disc by disc, the hopes and struggles of their people. 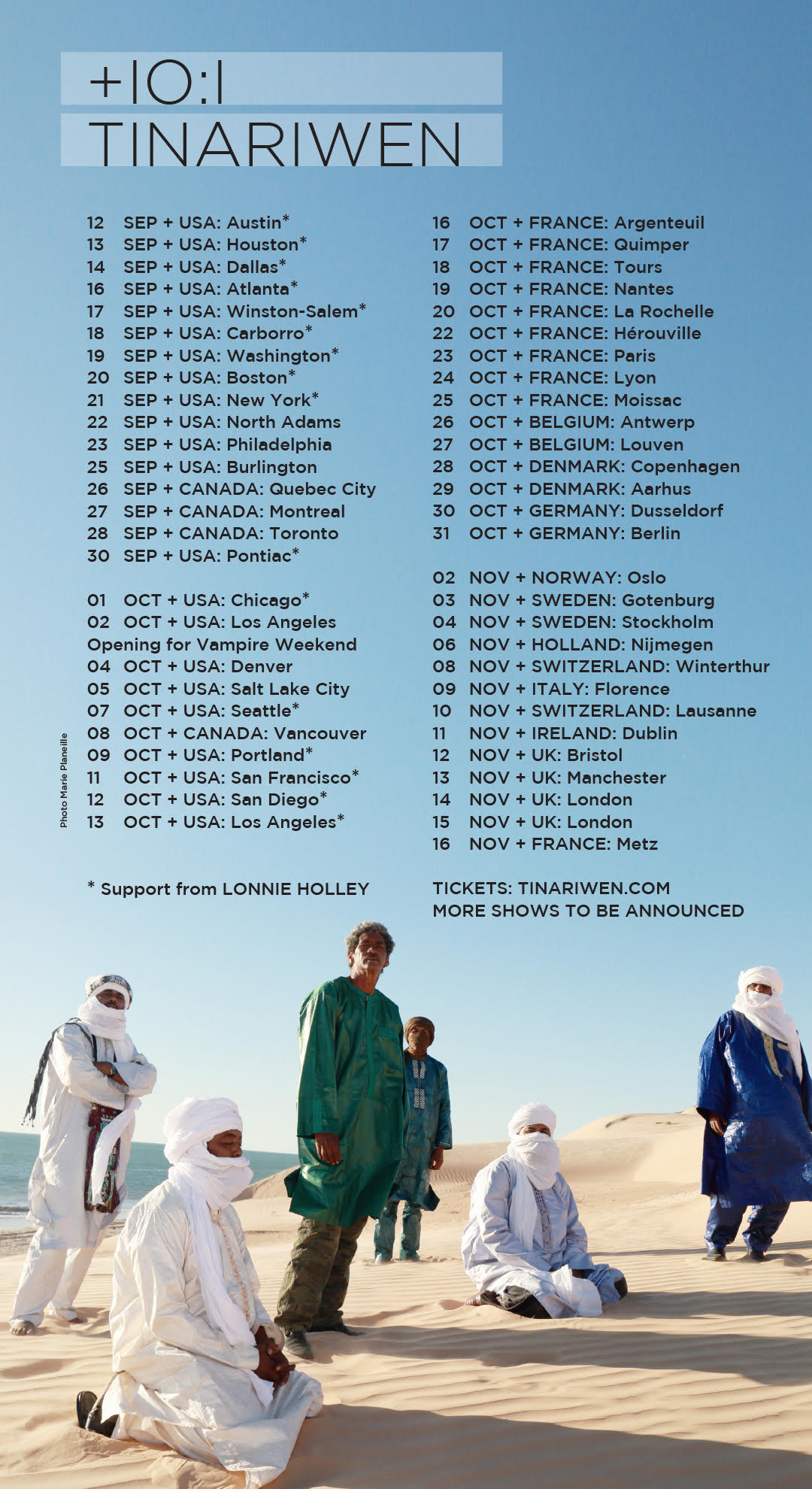