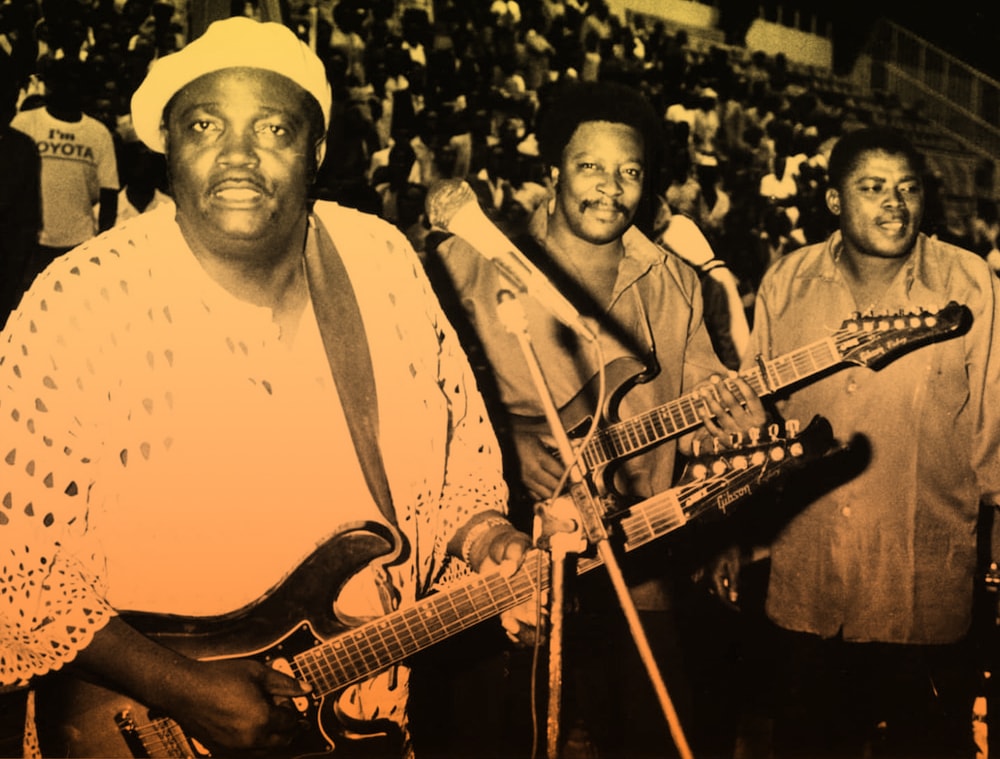 Let’s take a few tours and detours all over the continent to discover some of its guitar masters. To hear them at their best you often have to wait until the 1st verse or chorus is over; wait for the song to bloom and for the guitarist to rise.

Listen to our African Guitar Heroes playlist on Spotify and Deezer.

Let’s kick it off with Djelimady Tounkara, one of the best instrumentalists of his generation, who happens to play the guitar. The former member of the Rail Band of Bamako has managed to make his instrument take on the accents and triplets he previously learnt on the ngoni, the Mandingo lute, and even makes it flirt with flamenco and Afro-Cuban sounds. While Mali is not lacking in six-string talent (the eternal Ali Farka Touré, father of Saharan-accented deep blues, Kante Manfila, Zani Diabaté, and Mama Sissoko, who was part of Super Biton of Ségou’s best days), the best sounds are coming from the Democratic Republic of Congo.

The list is long: from the guitarist Popolipo Benico of the Zaiko Langa Langa orchestra, to Bopol Mansiamana and Diblo Dibala, who are among the guitar heroes of the 80s. Today, it is the prodigious Rodriguez Vangama who holds the torch. Listen to the track from Coup Fatal if you’re looking for a rumba version of Monteverdi’s Toccata! From the early years of cha cha independence, two guitar legends faced each other off in Kinshasa: Nico Kasanda, known as ‘Docteur Nico’, and Franco, known as ‘le sorcier de la guitare’ (the guitar wizard). The former became an expert in Hawaiian guitar, and the latter became a master of rhythmic loops augmented with infinite variations, reminiscent of likembe (thumb piano) playing.

Across the continent, the 1970s were the golden age of electric guitars, when the famous Sekou ‘Diamond Finger’ of Bembeya Jazz and his cousin Papa Diabaté recorded a unique album, African Virtuoses. They provided a formidable soundtrack to the aftermath of independence, and carried the struggles that were still going on in Southern Rhodesia which later became Zimbabwe in 1980. Oliver Mtukudzi is one of the figureheads of this wave of electric music which, inspired by the trance rhythms of the Shona people, challenged established order whilst playing traditional xylophones. The same principle applies in Madagascar where artists like D’Gary, as well as other six-string masters, have made their mark on the kabosy – a rudimentary four-string guitar – and on the traditional valiha or marovany zither.

The same issues were at stake in English-speaking countries at the end of the 1970s and the beginning of the 1980s, when guitar bands gave the formerly brassy Ghanaian high-life an electric flavour. This also happened in Nigeria where Sir Victor Uwaifo caused a sensation by playing a guitar with two necks. Prince Nico Mbarga and his famous Rockafill Jazz produced a song that became an anthem, “Sweet Mother”.

Our overview would not be complete without mentioning the Sahara, a land of blues irrigated by the Niger River. Even today, along its banks, the music maintains similarities, like the peoples who live off the river’s nourishing waters. Going deeper into the dunes of the Sahara we find Tinariwen, the founder of ‘ishumar’ blues, the unemployed of the Sahara, followed today by a legion of groups such as Tamikrest, who sing of the pain of women, the first victims in the conflicts that still beset the region.

Listen to our African Guitar Heroes playlist on Spotify and Deezer.

“Kinsiona”: when Franco cried over his great little brother
History