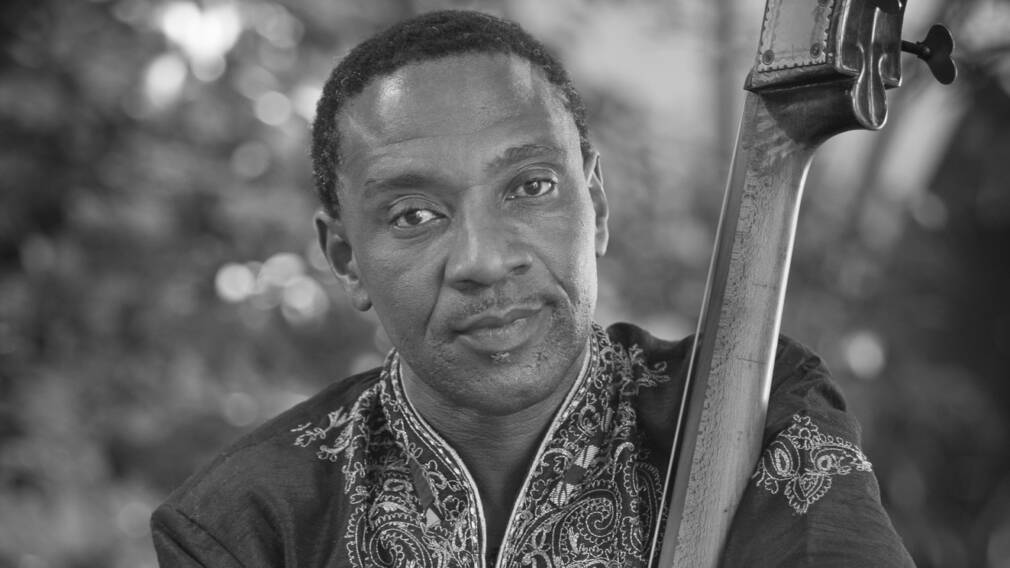 The many voices of Herbie Tsoaeli

For Jazzfest Berlin - Johannesburg, PAM met the Award winning South African bassist, as well as the spirits he carries. Meet Bra Herbie, the musician who speaks voices in volume.

Herbie Tsoaeli is a discrete, yet key figure of South African jazz. His debut album African Time was the 2013 Best Jazz Album at the South African Music Award, followed by the beautiful At This Point in Time (Voices in Volume) in 2021. The man has played with all the greatest “elders” who contributed to the formidable energy and creativity of Mzansi-bred jazz music: “Bra” Hugh (Masekela), “Bra” Louis (Moholo), “Bra” Zim (Ngqawana)…

When we meet him in a Johannesburg café for a discussion, it becomes clear that music is an integral part of his being. His words are as dense as his jazz, inhabited by epiphanies, surprising connections and unexpected poetry. He speaks like he composes, different ideas and voices colliding and intertwining like the “jazz moya” he plays, influenced by spirits.

“I was brought up in my grandmother’s house, in Cape Town. Ancestors have these clan names like Bakwena, or Bafokeng…  These are voices I used to hear in my grandmother’s house. It was happening, I could hear those people. These voices, they get translated into the music I do. And the music I do has been translated to the elders out there, for those who came before us. I have some ancestral umbrella protecting me.”

Cutting his teeth in the early 80’s in the Nyanga East township (he prefers the word “location”, a township being a “town with many ships” for him), he is a self-taught bassist, pianist, composer and arranger. His eyes light up when he remembers all the musicians he “had” at home, spinning on a disc: Coltrane, Miles Davis, Blue Notes, Mahotella Queens… His “selling whatever she could sell” grandmother wanted him to be responsible; he became a jazz musician.

“There was so much happening in the location. Next door was a Zionist church with their loud prayers. On the other side they were traditional healers, shouting. Then our grandfathers used to have Zulu, Xhosa or Sotho ceremonial stuff, with bands. And the location was a centre of jazz. That sound was all around me, and I liked being in that environment. I didn’t buy my first instruments ! There were schools in my community that used to lend them. And that’s how I became involved.

In terms of jazz, Cape Town was like… New York City. Let alone the money we were getting for our craft… the spirit and the energy were there. We would often play for nothing, just for the love of music. We would play a gig that would only pay our cab back. I played with the elders, like Bra Winston [“Mankunku” Ngozi]. I wouldn’t even be paid, and I’m not saying anyone robbed me, because we all knew what we were building together. I played with Abdullah Ibrahim, beautiful… Zim Ngqawana, incredible… Louis Moholo, wow !”

Indeed, there was Sophiatown in Johannesburg, and then there was Cape Town. The city was a “heartbeat” and jazz was a war cry against the daily horrors of Apartheid. However, this did not stop him from moving to Johannesburg in 1995, a turning point for the entire country. Herbie had to adapt to the City of Gold and the intense pace of a new era. Perhaps he longs for Table Mountain and the Atlantic Ocean when he speaks about how rapid things are nowadays : “You have to follow robots, go to departure and arrival time, then there are estimation times…This is not African Time! And in music, I don’t want people to emphasize on time”.

His years of playing with the greatest in Johannesburg led him to an Award winning album. Composition comes easily to him, as he takes note of everything: what the elders tell him, what the kids tell him…. “even the bergie!”. He also has a facility for translating his experiences into music, whether it be the beatings of his grandmother when he skipped church, or the voices he used to hear in his Nyanga room.

“When I play with my musicians, I also want them to speak to their elders. I connect with my spirits, with my grandmothers, and I want them to connect with their spirits and their grandmothers. With all these voices connecting together, it becomes Voices In Volumes.
And I know what I should translate or not. My ear is selective of what I listen to. You see these places where they produce bottles or manufactures? They have mechanisms to reject the bad elements on specific channels. That’s my ear with sound.”

After a life of jazz, it is still jazz that drives him. Outside of the United States, he is convinced that South African jazz is the most distinguishable, and he is excited about the new upcoming scene, that he sees “growing, growing and growing”. He shares their enthusiasm and excitement when he performs live with them, an experience he still struggles to put words to (“I can’t explain the feeling of being on stage… electrical, spiritual?”). While his ideas continue to flow, there is one thing he does not know: why jazz is so important in his country. All he can tell us is this :

“Our ancestors have many Gods. So I’ve always been dreaming of a chapel. But I guess, any club, anywhere in this world, is gonna be a chapel for me”.

At this Point in Time: Voices in Volumes by Herbie Tsoaeli, still available.