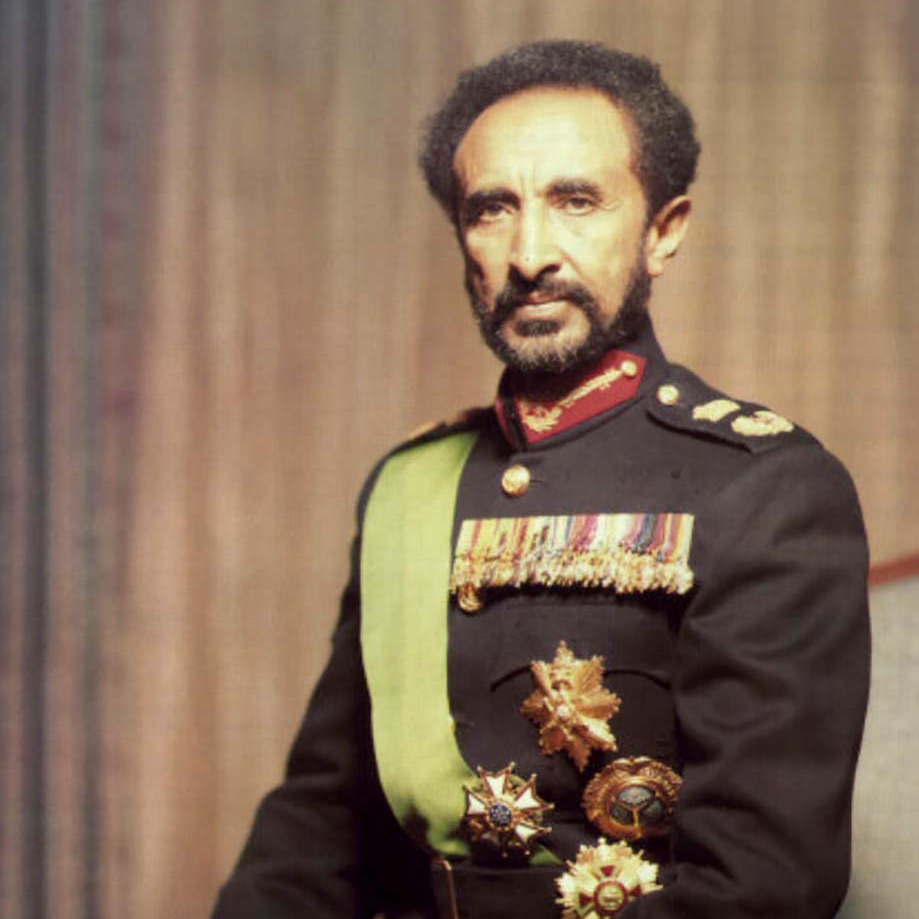 Haile Selassie I, emperor of Ethiopia and pan-African instigator, marked the world with his apocryphal personality and equivocal reign that has resonated into the reggae Rastafari and Africa’s modern political backdrop.

“African Giant” in the words of Nelson Mandela, Haile Selassie’s reign over Ethiopia lasted for several decades before it ended in a military prison in Addis Ababa. As the last member of the most ancient line of African kings, many black communities around the world perceived Selassie’s imperial crowning as a symbol of liberation and pride.

In The Prince, Machiavelli suggests that politics is a game played with deception, betrayal and crime.

The fatalism of this prophecy was revealed throughout Haile Selassie’s reign. His political and social accomplishments ran in parallel to countless lives sacrificed in his own country, ultimately leading to the monarch’s downfall. Though, if the current instability in Ethiopia is often associated with Selassie’s failure, a part of his legacy lives on as Cultural Heritage of Humanity through the Reggae musicians that he inspired.

Tafari Makonnen was born the son of Menelik II’s main advisor in 1892. He drew the admiration of the emperor and his council early on with his sharp intellect and sheer charisma. At the age of 24, he was installed prince regent of Ethiopia, endorsing the title of Ras Tafari. Throughout the rise of his political life, he built solid relationships with western countries in which he saw examples of modernity as well as strategic allies for the future.

In 1923, with the support of French diplomats, he registered Ethiopia with the League of Nations (the forerunner organisation to the United Nations). Prince Tafari was then representing the first independent African country in the international dialogue for world peace.

He was already an experienced ruler when, on November 2nd of 1930, the Ras was elevated emperor of Ethiopia, officially taking the name of Haile Selassie I or “His Imperial Majesty, Conquering Lion of the Tribe of Judah, King of Kings and Elect of God” as his full title was inscribed.

The celebration of Haile Selassie and his wife’s coronation was symbolic of much more than the simple upgrade of their political status. The monarch invited representatives from all over the world to attend 7 days of pharaonic-scale festivities in Addis Ababa. Well aware of the importance of his country’s image internationally, reporters were also formally solicited (among them Paramount and BBC) to display Ethiopia’s greatness and modernity to the world. Haile Selassie was later named ‘Man of the year’ by the iconic Time Magazine, completing a masterfully designed communication plan.

The sensational fairytale of the emperor’s coronation was just the ultimate layer to a much more ancient mythical story. Indeed, Selassie’s advent as emperor came to seal the legend that traces the genealogy of the Ethiopian royal family to King Solomon of Israel. It is said that, in the mid-900s BCE, Makeda (the Ethiopic name for the Queen of Sheba) had visited Solomon in Jerusalem (or Zion) after she heard about his great wisdom. Makeda converted to Judaism and returned to Ethiopia carrying a son that would become the first king of the Solomonic dynasty. This ancient connection grounded the myth of the emperor’s divine nature.

In Jamaica, for a few decades prior to his crowning, a stream of thinking was growing inspired by the figure of Haile Selassie. The black people had been freed from slavery but the oppression and marginalization lead by the British hegemony was still present. When political activist and theorist Marcus Garvey prophetically announced “Look to Africa when a black king shall be crowned, for the day of deliverance is near”, he triggered some of his followers to identify Haile Selassie as the messiah. The messianic associations were fuelled by the Greek biblical name for Africa as Aethiopia; favorable symbols to spiritual thought leaders Marcus Garvey and Léonard Percival Howell of Jamaica. This led to the creation of a socio-religious movement named Rastafari after Selassie’s early title and as a cult of his personality, considered divine. The movement is based on the resistance to western politics and economics, and the return to Africa of the black people that were abducted during years of white-domination.

Bob Marley was certainly the main icon to popularise the Rastafari movement. In “Blackman’s Redemption” he sings:

Haile Selassie’s single official visit to Jamaica in 1966 created an excitement amongst Rastas that remains unmatched to this day. They broke into the Kingston airport tarmac wearing red, gold and green adornments to greet their holy liberator and some Rastas were granted a private audience with the emperor. Although the emperor donated land to Jamaicans and Afro-Americans seeking home in Ethiopia, the phrase ‘liberation before repatriation’ is attributed to Selassie’s visit to Jamaica as a message to prioritise the fight for the black people’s empowerment before a return to Africa.

Rita Marley, Bob Marley’s wife, reported that she witnessed the stigma of crucifixion upon the emperor, reinforcing her conviction of his incarnation of Christ. Despite the intangible foundations of Rastafarianism, it has been, through music, a vehicle to the humanitarian message of Haile Selassie.

The most eloquent instance of Reggae as a vector for his call for universal peace is probably the adaptation of the speech made by Haile Selassie before the United Nations in 1963 by Bob Marley in his song “War”:

That until that day, dream of lasting peace, world citizenship
Rule of international morality
Will remain in but a fleeting illusion to be pursued, but never attained
Now everywhere is war
War

And until that day the African continent will not know peace
We Africans will fight, we find it necessary
And we know we shall win, as we are confident
In the victory”

The same year, 1963, Haile Selassie invited all 53 African nation’s leaders to sign up to the Organisation of African Unity with the common objective of political and economic integration amongst its members. Music was an essential part of the ceremony, with ‘Mama Africa’ in exile Miriam Makeba performing for the occasion. An initiative of such potential was made possible by Selassie’s leadership carrying out the proposal and acting as a mediator between the antagonist countries. This union was a step forward to terminate colonialism from the African continent. However, In the absence of concrete common authority to tackle issues and enforce the OAU’s policies, the hopeful impulse following its creation was quickly replaced by criticism for its inaction. To Selassie’s credit, several founding principles of the OAU were conserved when erecting its follow-up entity, the African Union, in 2002.

While he led an impactful international career and was upheld as a figure of Pan Africanism defending Human Rights, Haile Selassie was leading Ethiopia with some degree of austerity. Shortly after his crowning, the country adopted a new constitution that restricted the parliament’s power, preserved the establishment of nobility, and imposed strict censors to monopolise cultural production, including that of music, which wasn’t again broken until the end of the 60’s by the audacious Ahma Esheté.

Ethiopia was invaded in 1935 by Mussolini’s fascit regime making use of chemical weapons in a repeated attempt of Italian colonisation. Haile Selassie successfully coordinated the liberation with his British allies in 1941. This allowed Ethiopia to live up to the adage according to which it stands as the only African country that never was colonised by the Europeans.

His main national accomplishment was the modernization of the country. Along with the creation of infrastructures and law enforcement systems, Selassie acted in favour of education, investing in schools and student exchange programs to western universities. The initiative backfired as the educated young generations were struck by the economic and political delay of their country. Student organizations started to form in Addis Ababa in the 60s and protests broke out against the government’s censorship and the inefficient farming-land distribution leading to regular and deadly famines. The US military presence was also criticised and increasingly suspected to keep Selassie in power.

Critical famines in the country

Since the beginning of Selassie’s reign, the country’s northern provinces including Tigray and Wollo, formed rebellions against the central government for its negligence and unfair repartition of public resources and infrastructures. For many years, between the 50s and the 70s, critical episodes of famine struck the country. In retaliation to their dissidence, Selassie wittingly ignored his people’s misery. He also acted against the propagation of information about these tragedies that led to innumerable deaths, as well the exile of many Ethiopians desperately seeking refuge outside the country.

In april 1974, while the capital city was shaken by student protest, the military organised a putsch against Haile Selassie who died in prison the next year under suspicious circumstances. The country was taken over by the communist dictatorship of Derg, and most of Selassie’s material estate was destroyed. His family was persecuted, imprisoned, or had to flee the country. The Derg dictatorship, ran by Mengistu Haile Mariam, would prove even more bloody and oppressive with curfews that ran many years suffocating the cultural effervescence of Addis-Ababa.

In The Prince, Machiavelli says that the ruler who is establishing a kingdom or a republic, and is criticized for his deeds, including violence, should be excused when the intention and the result is beneficial.

This idea of political power being consequentialist by nature was a comfort by Rastafarians claiming to reject the concept of “polytricks” as “a constant deceptive scheme of the upper classes to gain and maintain power and privileges.” in the words of Ph.D Ennis B. Edmonds. This is supported by Bob Marley in his song “Ambush In The Night”:

In Ethiopia, Jamaica, and around the world, Haile Selassie I is to be remembered amongst the 20th century’s most significant figures of Pan-Africanism. His mistakes as a domestic despot should be remembered and will hopefully enlighten the decisions of forthcoming generations of African leaders notably in these times of turmoil.