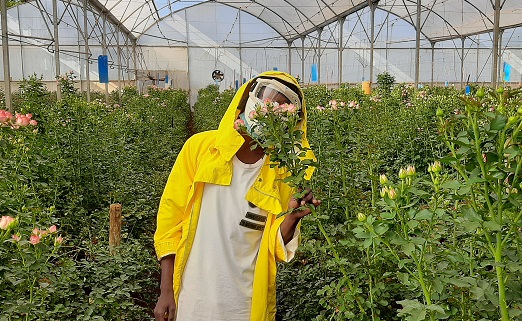 Kenyan experimental producer EchoE calls upon his childhood memories by delivering a mix of his influences. A PAM Club placed under the sign of the East African rhumba!

At the beginning of the year, we discovered the state of mind of EchoE through his EP Ni Thayû Thayû that we presented you a preview here. At the time homeless and armed with a laptop and his phone, the masked artist translated his ideas into a futuristic musical language inspired by the sound aesthetics of his city that he calls “Nairobi Bounce”. From this DIY state of mind came five experimental tracks in which Kelvin Gilo electrifies local music while claiming Kenya’s cultural heritage. The DJ, producer and sound designer explores the concept of balance between people, culture and nature, influenced by both the Afro-futurist movement and the sounds he heard as a child. Surrounded by reggae and Christian music, EchoE pays homage to the rhumba that also resounds at home in this PAM Club that honors the old.

“This mix was born out of a curiosity to rediscover my roots and reconnect with my childhood memories. I grew up listening to these songs! The mix is full of rhumba classics, familiar in all African homes. We used to listen to this music on Sunday afternoons under a tree when the sun was at its peak or in the common playground before school or work. Peace is the message, love is the solution and music is the answer!“