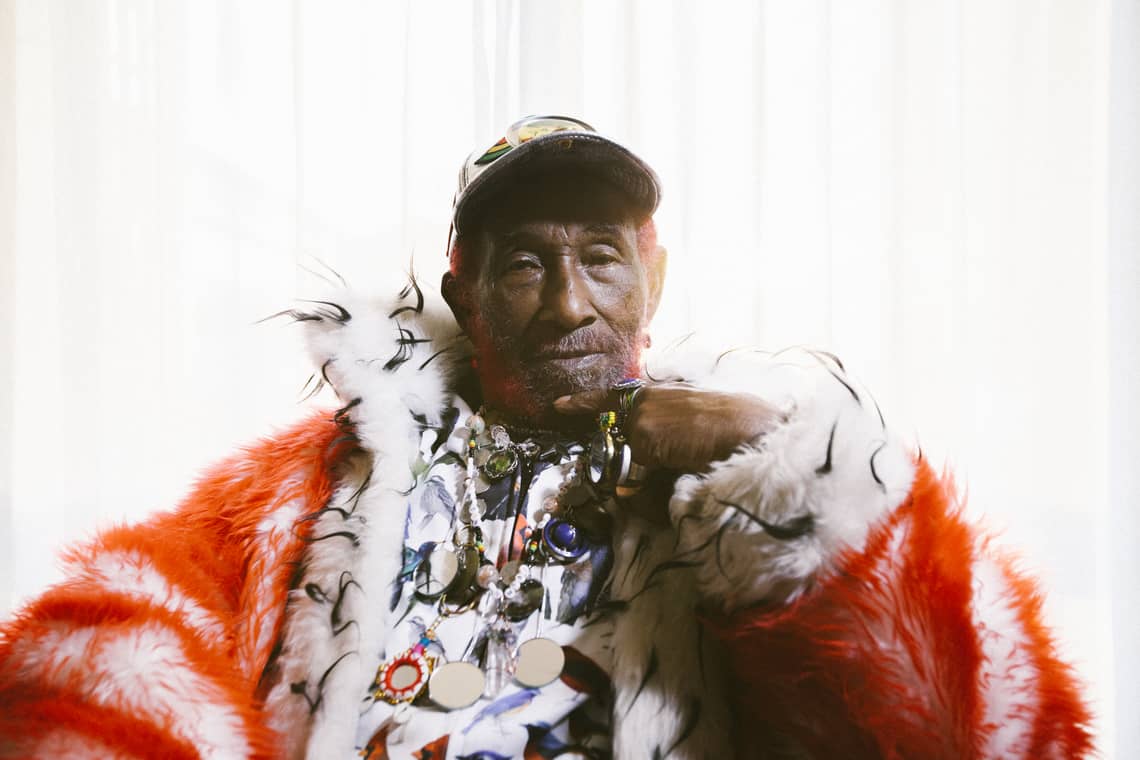 Lee ‘Scratch’ Perry has released Rainford with Adrian Sherwood, boss of the legendary English label On-U-Sound. At 83, the Jamaican wizard is finally – without folklore or charms – taking part in an album that bears his real name!

Everyone who has seen him in concert or heard his interviews knows that Lee Perry is an artist … in every sense of the word. He’s evolved in a universe far from our low earthly concerns, a universe in which art is summoned with rituals and ceremonies, candles, charms, incense, jewels, and magical mirrors. That’s probably why Perry never ceases to inspire other artists. Musicians, poets, sound engineers, producers, filmmakers, and more. David Lynch, Brian Eno, Paul McCartney, Keith Richards, Bob Marley, The Congos, and the Beastie Boys are part of the long list of those who have worked with the Jamaican maestro.

Recently, Perry has even infiltrated the very select world of contemporary art. In Perry’s visual and supernatural galaxy, we come across icons – Jesus and the Devil, the Bible, apocalyptic visions, thunderbolts, fire, angels, sex, and other actors of malintent. At 83, the ‘grandfather of electronic music’, is entering his twilight years a little like the filmmaker Agnès Varda, the grandmother of New Wave: adulated by a very eclectic family of younger artists and canonised before their death by museums calling them visionary visual artists.

Apart from the museums and galleries, Varda and Perry also have in common the fact of having passed into posterity. This is partly because they were able to be free before their time, but mostly because they have remained so despite the expectations placed on their art in an era where being atypical attracts ‘likes’ and videos go viral online.

One of Perry’s most famous videos shows him in his studio in Jamaica in the ’70s. He is both Salvador Dali – with a colourful set and performance – and Thelonious Monk – with his improvisational dexterity as his be-ringed fingers strum with virtuosity on the console of his studio to create effects (delay, reverb, distortions etc). Perry re-adjusts analog tapes with his screwdriver and fiddles with buttons like a jubilant kid. We understand why Brian Eno sees him as ‘a genius of recorded music.’

But Perry had several lives before entering the studio. He was a construction labourer, domino player, dancer, assistant producer and boss of the sound system Duke Reid, then he became a singer. And it is by becoming a sound producer/engineer that he enters history, thanks to the incredible productions from his studio, Black Ark. In this mystical place he has built a vanguard sound which has come to influence all experimental music, exploring the depth of sound with machines and effects, and a style of dub that would resonate in hip hop and techno from New York to Detroit and beyond … 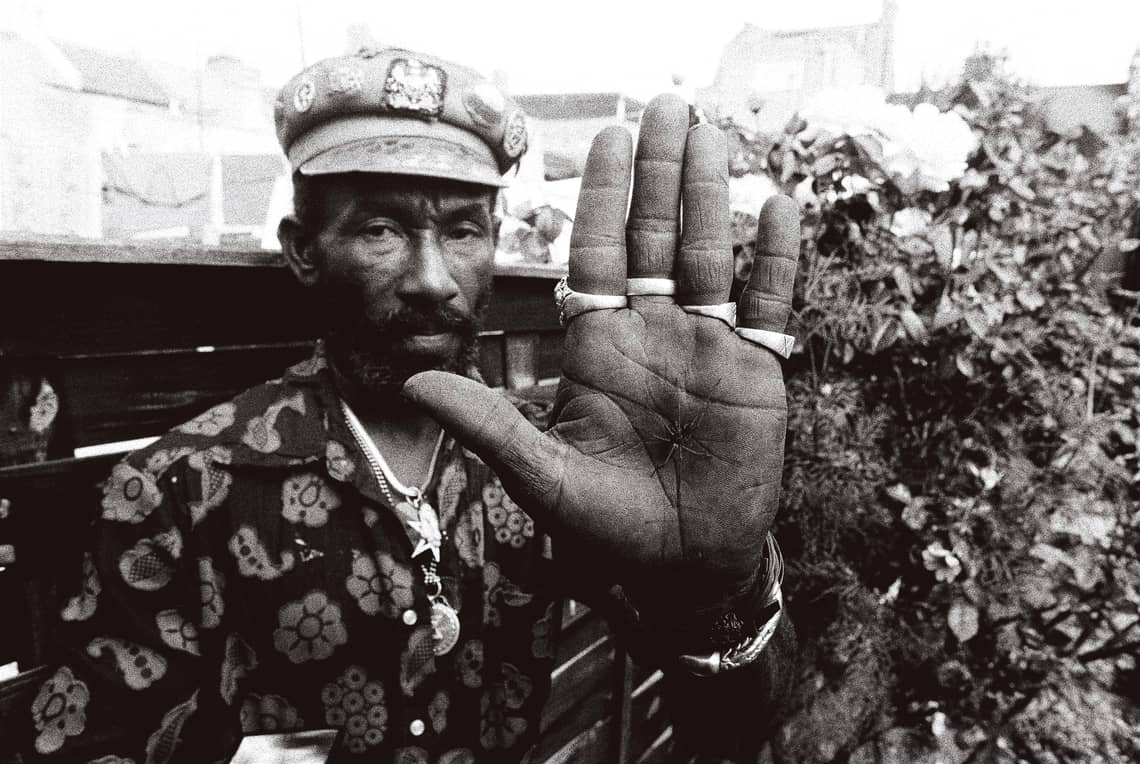 Lee Perry has seen his way through the times with a visionary and visual approach, as well as a spiritual vibration carried by the power of the bass drum and its air melodies, to which he added innovative sounds (screams, babies, motorcycles, delay, echo). He so magnifies the sound of what he creates that it’s hard to imagine how Perry could surrender to a producer, especially since some experiments were unconvincing. Above all, how could a producer capture the soul of this elusive character who connects jokes and fantasies without always knowing how to differentiate them? But Adrian Sherwood has known Perry since the 80s. It was the underground radio activist Steve Barker who introduced them and they made several records together, including Time Boom X De Devil Dead.

‘It’s hard to push Perry into action, but I really wanted him to do something very personal,’ says On-U-Sound boss Adrian Sherwood. ‘Lee has fun all the time, he shakes things up, he makes you let down your guard. I went to see him in Negril in Jamaica to explain the project. He said to me, “I won’t do what you tell me to do!” We laughed. But in the end, this record is the result of a very close collaboration over more than two years, and it is certainly his most personal record.’

Sherwood grew up in a multiracial neighbourhood of London that absorbed immigrants from the former British colonies. He fell into Jamaican music as a teenager, at a time when ‘everyone was dancing to reggae, whether they were grandmothers or black or white teens, because the message could affect anyone excluded from the system.’

Although today he’s based at his studio in Ramsgate – and he admits that dub is more active in France than in the England of grime and Brexit – Sherwood was at the heart of London’s first ventures into dub before bringing out other kinds of music. He has worked with The Slits, Tunde Adebimpe (TV On The Radio), Depeche Mode, Nine Inch Nails, and Blur. 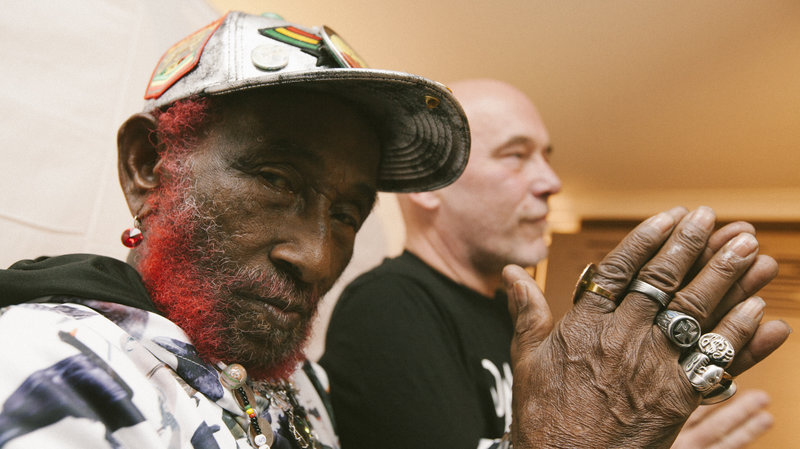 ‘I’m trying to create my own sound without disfiguring what the artists do,’ says Sherwood, who likens his work with Perry to Rick Rubin’s with Johnny Cash. Except that Sherwood also learned a lot with Perry, nicknamed ‘The Upsetter’. ‘In reality, “Upsetter” also means the one who sets me up, or raises me up, and that refers to black people’, corrects Adrian Sherwood. ‘Even though I’m white, Perry has elevated me in this direction. Professionally, he taught me that a producer is first and foremost someone who’ll create a unique atmosphere for artists to believe that something magical is going to happen. Lee has done this throughout his life too. He lights candles and puts out talismans to create a connection to another world.’

Sherwood was also able to take Perry to other worlds while telling him about his life. When Sherwood invited him to a psychedelic Candomblé rock session with a Cuica virtuoso (Simone Soul) in Brazil on Makumba Rock, or summoned a Gothic cello in ‘Let It Rain’, Perry rises while everything becomes distorted around him as Adrian Sherwood juxtaposes sonic textures. The hoarse rasp of Perry’s voice marries Sherwood’s moods and ideas. And vice versa. And when he croaks ‘“Repent!” said the locust on the palm tree’ and smashes a psychedelic guitar during “Cricket on the Moon”, Sherwood points out the strange frequencies of the insect. ‘It was Lee who wanted to record locusts in front of his home in Jamaica the night after a storm,’ relates Sherwood admiringly.

And it ends with some autobiographical dub, “Autobiography of the Upsetter”, which allows the facetious Perry to unfold his life on a carpet of echoes, ghosts, and allusions to his past and his track record (his productions, his hits, his collaboration with Marley, the fire in his studio Black Ark, not to mention his debut at Sir Coxsone and Duke Reid, or his grudge against the producer Chris Blackwell, whom Perry sees as a sort of vampire who sucks blood from chickens and artists …). He concludes: ‘I am the richest man in my head, I am the Upsetter!’ Always alert, lucid, something of a visionary, Perry promises that he’s not ready just yet to end his genius career!
Rainford is available via On-U-Sound, discover here.

Read next : Reggae, riots and resistance: the sounds of Black Britain in 1981 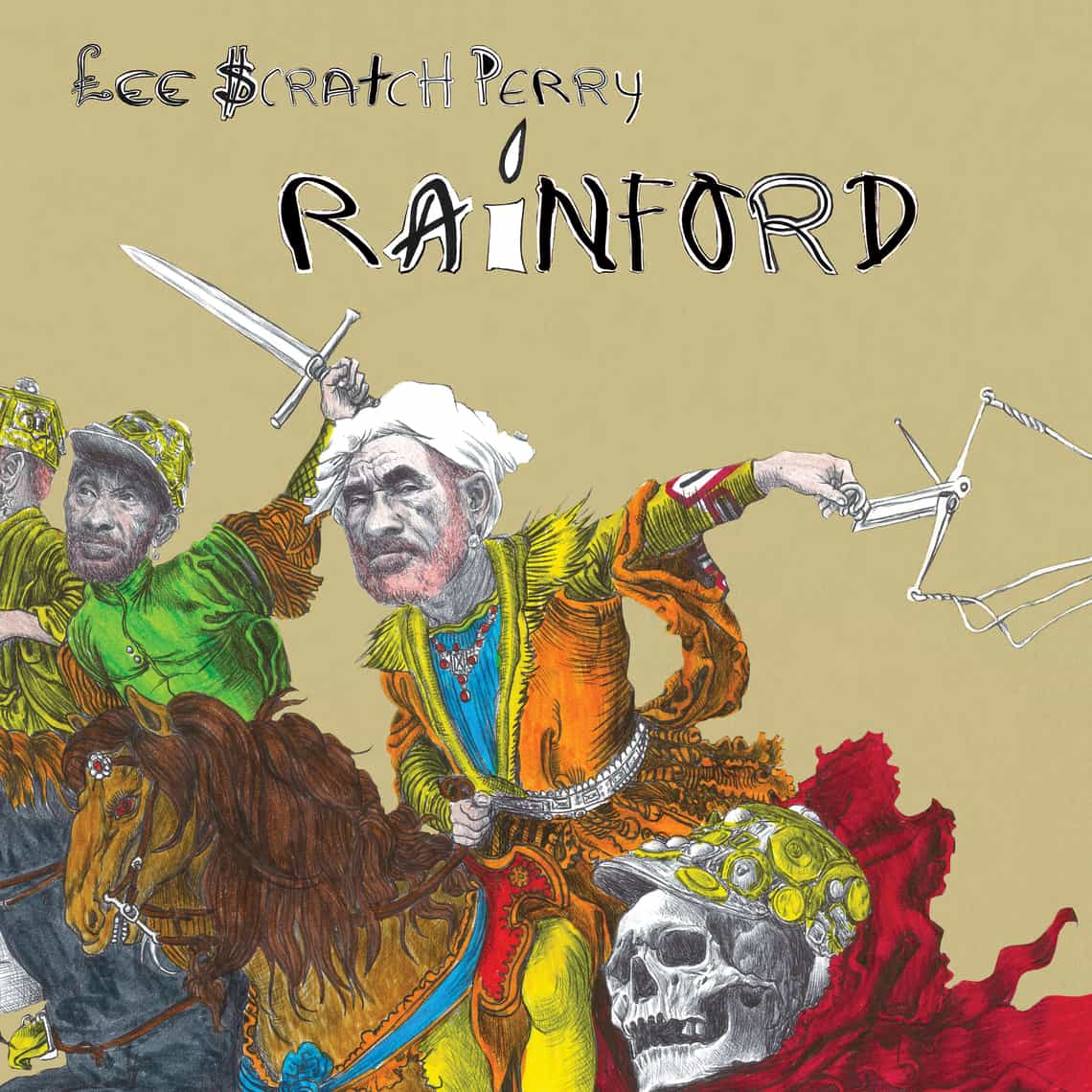