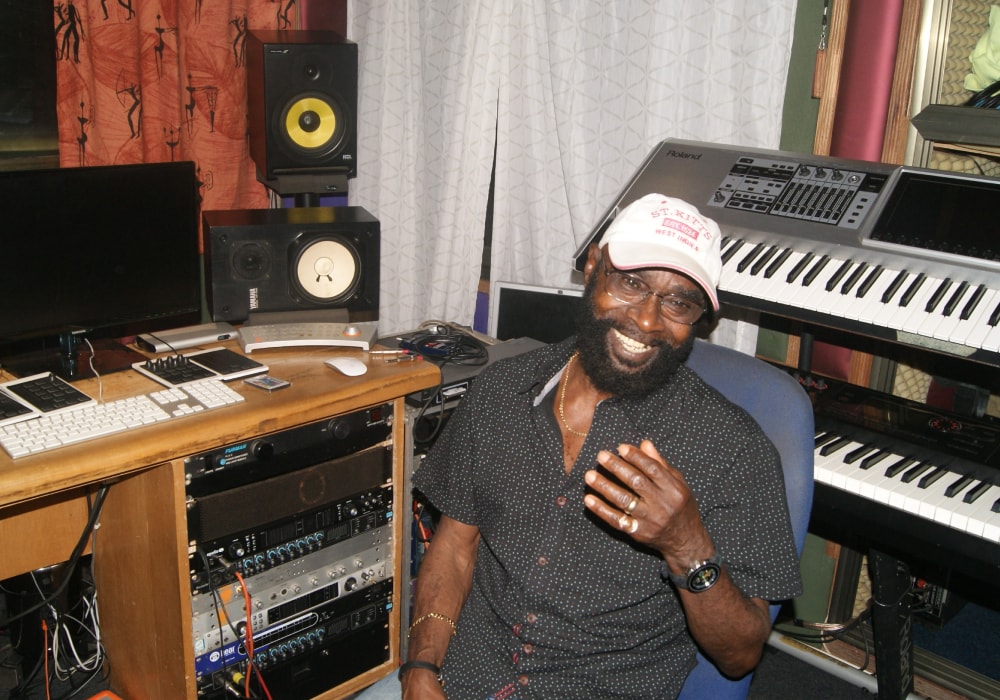 The Ghanaian singer released his new album on October 4th. Just before his European tour, Pat Thomas invited us to Accra, the capital city of Ghana.

It is in the western part of Accra, in a house with no address, next to a dirt road, that we meet “Ghana’s First Rock Star”, the highlife legend Pat Thomas. We cross a smoky room and a home studio and find ourselves in the middle of a hot rehearsal. Sitting on a sofa opposite his newly reunited Kwashibu Area Band, Pat Thomas is listening, attentive and focused. Suddenly, he gets up and, dancing with eyes closed, lets forth his perfectly recognizable voice, the famous “Golden Voice of Africa”. The years have passed but Pat Thomas is undoubtedly still a star. Let us look back on more than 50 years of a musical career and a life of opportunity and improvisation, guided by music and by the destiny of Ghana.

Pat Thomas’ story begins in the 1950s, shortly before the country’s independence in 1957 – the first African independence. This historical event does not seem to have affected him much. Indeed, the singer defines his childhood above all as a period of learning, far from political struggles. “During my school years, I wanted to learn music as it is supposed to be,” he says with a broad smile. “So, I had to travel. I joined my uncle, King Onyina, a musician in Kumasi”. How did he know at such a young age that he wanted to be a musician? Pat himself has trouble explaining it. “Everything told me I had to be a musician,” he says. Even though his mother would have preferred that he continue his studies, she could not dissuade him. She was the leader of a choir, while his father was a music teacher. “I have their blood inside me,” he says with an evocative look: he has the music gene inside him.

He lives with his uncle for about 4 years during which he learns drums, percussion and guitar, although he knows that his best asset is his voice. His daily life is peaceful: he rehearses, plays alone, learns, and secretly listens to his relative’s CDs. Despite the age limit, he slips into nightclubs and bonds with a highlife band called the Broadway Dance Club. “Until one day my uncle was going on tour and I asked to join him because I used to be bored when he left me. He accepted and took me with him”. One day, the tour stops in Takoradi, Western region, and 19-year-old Pat realizes that the Broadway band is actually living in this city. Another coincidence – one of many in the singer’s life – his uncle’s tour bus is parked right in front of his friends’ hotel. He wants to see them and arrives in the middle of one of their rehearsals, disrupted by a slight problem: “Their singer was a Ewe guy, he couldn’t speak Twi! He couldn’t sing one of their songs. So they stopped playing and the group leader came to talk to me. He knew that I was from Kumasi and that I would be able to sing the lyrics of the song. They gave me a microphone. My brother… I opened my voice, I sang the song loudly, and then everyone just looked at each other”. Although the band is completely astonished by his talent, their manager refuses to let him replace the current singer but suggests that he stay with him until he can find an opportunity adapted to this promising voice. 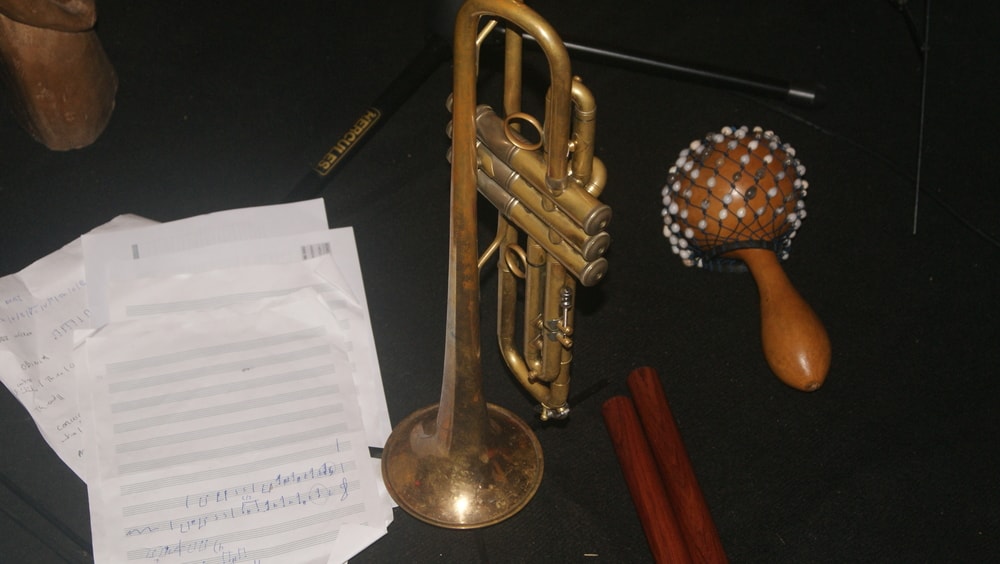 The giants and icons of highlife and afrobeat

This opportunity arrives 5 years later in the early 1970s in the person of Ebo Taylor, another highlife giant, who has just returned from London. “Ebo asked the manager for a band and a singer. The manager told him: “Here’s your singer”, says Pat, laughing at the memory of Ebo’s reaction, shocked by his young age and frail appearance. The two young men immediately take to each other, so much so that they even live together for a while. “We became best friends. You could say that Ebo is one of my mentors: he contributed to my music and motivated me to write my own songs. We still see each other. It all started from there”. The 1970s were indeed a turning point in Pat Thomas’ career. The newly formed band, Sweet Beans, sponsored by the Cocoa Farmer Association, moves to Accra and becomes the official group of the Tiptoe Nightclub. “Because there were very few events on weekdays in Accra, we created the Wednesday Nights at Tiptoe where we played. If you didn’t go to Tiptoe on Wednesday night, you weren’t in Accra. We became extremely popular. At that time, what we did at Tiptoe inspired other clubs to have their own official bands”. While Accra’s nocturnal highlife scene expands phenomenally, Pat Thomas, already a huge star, rehearses during the day and plays at night, signs various contracts, forms a group in Ivory Coast, decides to go to Germany, gives it up, creates a new band in Ghana… Between 1970 and 1975, he sings and plays with Ebo Taylor; from 1975 to 1977, in the brilliance of the disco years, Sweet Beans dissolves and reformes under the name Marijata, with whom he meets a great success. He also draws the attention of the Nigerian Afrobeat musicians. He records two hits with percussionist Tony Allen and meets legend and superstar Fela Kuti. “One night while we were playing at Tiptoe, Fela came and started playing with us. But he was playing highlife! I went to his house later, to the Kalakuta Republic. We played, we went clubbing… He was very nice to me. But I’ve always been closer to Tony. We still talk to each other and call each other”.

Pat Thomas also ends up meeting another important figure in West Africa: Ignatius Acheampong, Ghana’s military head of state between 1972 and 1978. Pat’s band has to play for him at an official ceremony but due to a misunderstanding, they arrive late. Pat still ends up playing for Acheampong, who seems very happy about the performance. “He danced, showed me around the palace, autographed his book for me, and even gave me CDs and bottles of whiskey. The next day, I go to the office and I am told the boss called to say that the group is being dismantled. Why? Because Acheampong said I was late for the show”. A year later, in 1979, Jerry Rawlings’ coup takes place in Ghana. “Because of the coup, I couldn’t play at night anymore: there was a curfew! There was no more nightlife. What could I do? A girlfriend in Germany suggested that I join her to form a new band. So I went there and stayed there for about 3 years. Then I went to London for a one-year contract, and then to Canada for another contract… but I ended up staying there 10 years”. 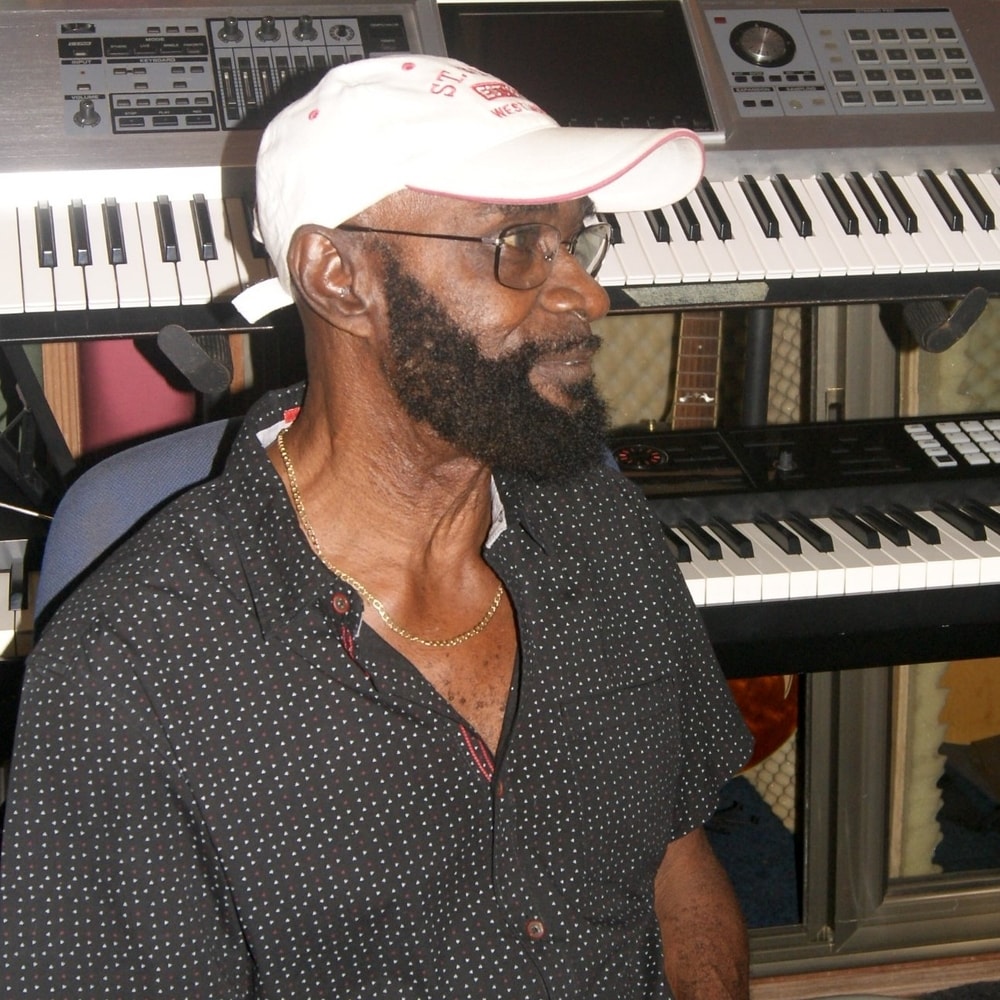 Back to Ghana, back to highlife

In Canada, he teaches percussion and creates a new band, composed of Canadian and Ghanaian musicians. He also records albums and plays at festivals. “Then I came back to Ghana, after 10 years, with a new contract. I was so happy. The business was going well: my new label had given me a house, a car, a band… I felt so good”.  He released albums and records as a solo artist, for example, Sikiya Mogya his all-time biggest hit in Ghana. But in 2009, an idea took shape in the minds of Kwame Yeboah, a renowned Ghanaian musician, and Ben Abarbanel-Wolff, saxophonist and producer who had masterminded Ebo Taylor’s 2010 comeback album Love and Death and following 5-year tour. “I wanted to have a stable band and tour, like Ebo,” Pat recalls. “Then Ben and Kwame called me and told me about Strut Records who wanted to record me and would offer me a band and a tour”. Very quickly, the newly formed band assembles and starts recording, in Accra and Berlin, collaborating with Tony Allen and Ebo Taylor. In 2015, they release the eponymous album “Pat Thomas & Kwashibu Area Band”, a benchmark in terms of contemporary highlife. The success is immediate and is followed by a worldwide tour taking the Kwashibu Area Band to renowned festivals like Glastonbury or Roskilde. The new album Obiaa!, recorded between Accra and Berlin, is scheduled for 4 October 2019 on Strut Records. Pat is happy about the result and is also very positive about the current Ghanaian music scene. “10 years after the 1979 coup, the hiplife guys arrived because they didn’t need live music and a lot of musicians had left Ghana. I listen to a lot of them and I like them: they mingle a lot with the Nigerians, like us at the time when Fela came here to learn highlife. I am very connected, I have done several collaborations with these young guys”.

Ben Abarbanel-Wolff suddenly sticks his head around the door: he worries about the time and teases Pat gently, telling him that he might get tired if he stays too long in the interview. The singer gets up laughing and joins the band for their 10th hour of rehearsal. Tired perhaps, but ready and up for the fantastic European tour coming up. 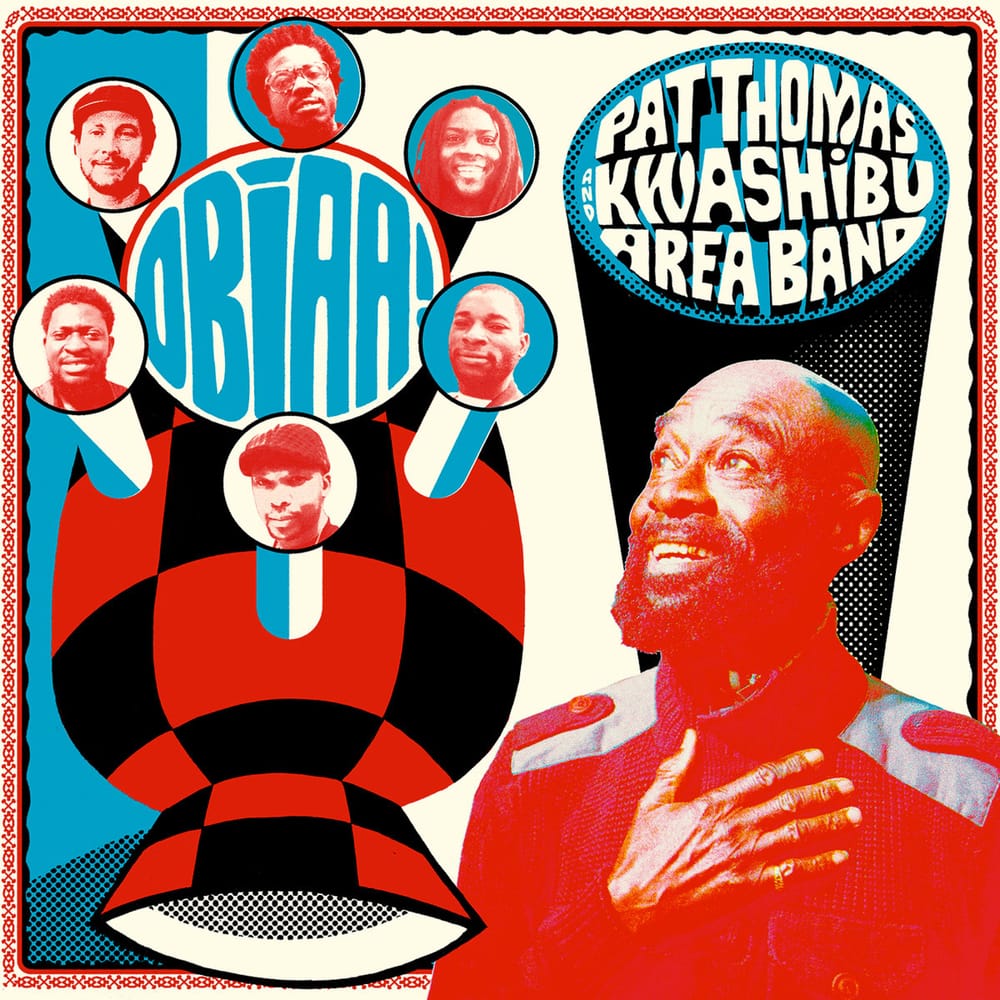