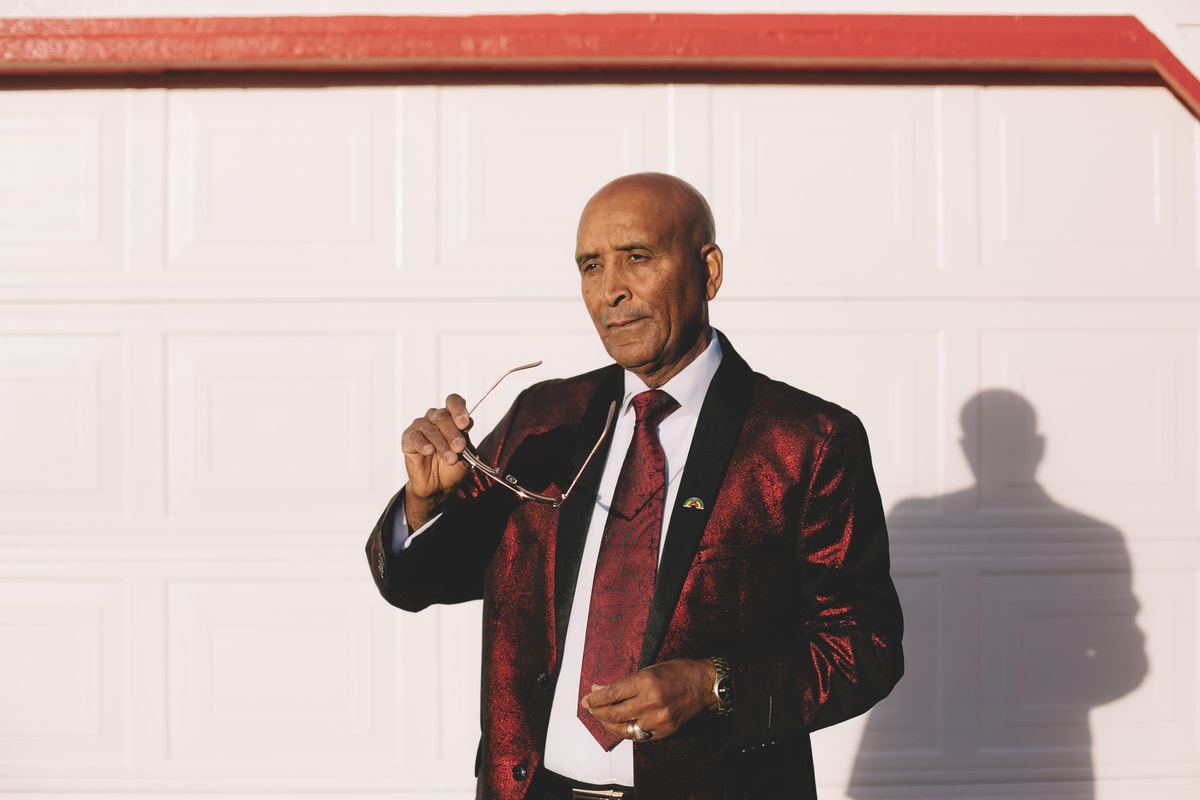 After more than a forty-year absence, Ayalew Mesfin is back on November the 8th with the Debo Band, for a big concert at the Le Guess Who? festival in Utrecht, Netherlands. For PAM, the Ethiopian funk legend revisits prison time, the superstar era and a life filled with musical activism, from Addis Ababa, Ethiopia to Denver, USA.

Although extremely popular in Ethiopia in the 1970s, Ethiopian funk has remained rather hidden to the rest of the world until 1996 when Francis Falceto began his Éthiopiques compilation series (Buda Musique): a priceless catalog compiling hundreds of the wonders of Ethiopian and Eritrean music from the 1960s to the 2000s. Some major artists such as Mulatu Astatke, Mahmoud Ahmed or Getatchew Mekurya enjoyed almost instant international success following their (re)discovery, however the time had not come yet for Ayalew Mesfin, although he was featured on the Éthiopiques’ 8th volume as early as 2000, and again in 2009 on Golden Years of Modern Ethiopian Music, 1969-1975.

Among the twenty-one tracks of the album, it is only “Hasabe” that features fuzzy guitars and wah-wah effects, composing a funk hit that James Brown himself could have easily written and performed. The song caught the attention of a few North American diggers, including Stones Throw Records’ team and Madlib’s brother Oh No, who immediately sampled the singer’s vocals on “Ethiopium”. That very fuzz guitar, and in particular its author, Eothen Alapatt – aka Egon – tracked them down for over ten years. Until 2018 when – victory! – the boss of Californian label Now Again finally reissued a compilation of Mesfin’s greatest hits, fittingly titled “Hasabe (My Worries)”. He explained: “I like to think that our reissues are more than just records; they are puzzle pieces to rebuild history and perhaps do justice to those we have erased from official books.” This is also the case for Ayalew Mesfin, who added: “This reissue was for me the most beautiful of rebirths.”

Born in the ’40s in Weldiya, in the north of the country, Ayalew Mesfin soon gave in to Addis’ advances in order to realize his “deepest dream: to become a modern musician” in the footsteps of Tilahun Gessesse or Tamrat Molla who he was listening to on loop on the radio. Defying his father’s authority that condemned his musical profession, Ayalew Mesfin was 11 when he settled in the Ethiopian capital. In order to survive he successively held the position of waiter, doorman and cashier in chic restaurants before losing sight of music to opt for a military career. He became a member of the Ethiopian Republican Guard, dedicated to the protection of “His Imperial Majesty” Haile Selassie I. “It meant you had to be highly trained, qualified and respected,” recalls Ayalew Mesfin. “I did not want to disappoint my father.” Except on one evening, while passing by the monumental Arat Kilo (a sort of obelisk in central Addis that commemorates the end of the Italian occupation), Ayalew Mesfin ran into one of his idols in the middle of a rehearsal session, and thanks to a good shot of nerves, found himself immediately hired by Gétatchèw Kassa and his Soul Ekos Band.

The adventure did not last very long, however Ayalew Mesfin would never change his path: he left the army and opened a venue, The Stereo Club, then a shop, the Ayalew Music Shop, where he sold records, instruments, state-of-the-art sound systems and recording equipment directly imported from Germany. “I was 24 years old and I was so happy! We were pioneers at the forefront of modernity,” he recalls. “It was phenomenal! I was selling the records of my idols – Mahmoud Ahmed, Aretha Franklin, Sam Cooke, Sayed Khalifa, Jimi Hendrix, Fela Kuti, James Brown – to both local and international customers,” he continues, referencing the Organization of African Unity (OAU) founded in 1963 by Haile Selassie and other countries’ heads of State, and the unique atmosphere of “Swinging Addis” and crazy times of electric nights in an Ethiopia emblematic of a then independent and non-aligned Africa. 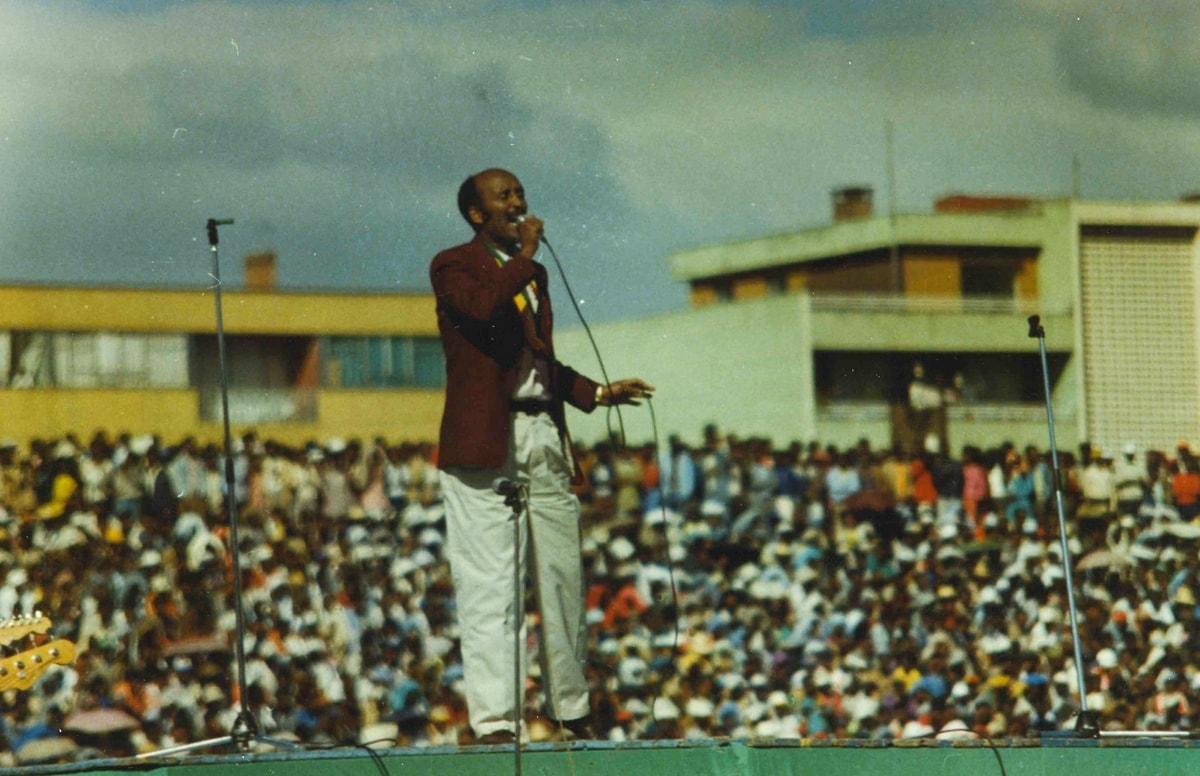 In 1973, Ayalew Mesfin founded the Black Lion Band and he proved to be a real showman. Dancing and screaming a la James Brown, and his afrobeat-infused psychedelic funk was contagious: the band performed a great deal of sold out shows all around the country. “People were offering us gold, jewelerry, coffee, honey and so much love… what a time!” exults the musician. He may put traditional Ethiopian instruments aside – such as washint, krar and kebero – and substituted them with brass, electric guitars and drum kits, Ayalew Mesfin never forgot where he came from. “Ethiopia has plenty of original rhythms that range over the last 2000 years, since Saint Yared and his pentatonic reggae riddims, and we have our own kinds of bossa, boogie, salsa, and the tizitas too… [t/n: one of the Ethiopian music modes, loaded with melancholy] So I did not have to imitate anyone,” he says proudly. But the golden age of music turned sour on September 12, 1974 when, after months of famine and insurrection, Emperor Haile Selassie is overthrown by a military junta, giving way to fifteen years of bloody dictatorship.

I USED TO LOVE YOU

Ayalew Mesfin now lives a peaceful life in Denver, USA, where he has been doing his best to bring “unity, love and peace” to his community for over twenty years. “But I miss my soul, happiness, integrity and heroism: all are buried there in Ethiopia,” he sighs.

The phone line crackles, Mesfin’s voice seems to dwindle, and fades out.

We were so naive,” admits Ayalew Mesfin. “We wanted a change, but no one imagined what would happen next. I indeed initially supported the Derg revolution, but when they slaughtered sixty intellectuals and started the genocide, that became unacceptable.” Did he think about exile? No way.

From then on, the young man entered in resistance, “my only weapon my music, still I was ready to do everything to defend my flag, my nation and my people”. Under the cover of love songs, Ayalew Mesfin cheerfully criticized the terrorist regime of Colonel Mengistu Haile Maryam and his government. Paradoxically, it was also the Black Lion Band’s most prolific period, a backing band with which he would record dozens of hits such as “Libe Menta Hone” (“My heart divided”) and “Ewedish Nebere” (“before I loved you”) at Kaifa Records, among other labels. But the artist-activist became trapped in a vise.

Ayalew Mesfin would spend three months in prison and thirteen years under house arrest, his music was banned from radio airplay, and every single Addis Ababa’s music venue and record shop: from 1977, the singer was silenced for having begun the distribution of 4000 anti-government propaganda audio cassettes. Betrayed by one of his best friends – “a double agent” in fact –, the musician still considers himself “the luckiest man in the world: they exterminated people for far less than that: raising their eyes to the sky was enough. Thank God, they did not kill me, but I still do not know why.” Could his past in the army have saved him? Despite his misfortune, Ayalew Mesfin continued to take risks: in a secret studio he does not want to reveal anything about, he recorded the work of protest musicians he does not want to say anything about either – ”patriots,” he validates.

At the fall of the Derg in 1991, the Red Negus left behind a bloodless Ethiopia, after fifteen years of authoritarian and murderous “socialism”. Ayalew Mesfin was released but did not find peace: the Ethiopian People’s Democratic Movement (EPDM) rose to power but was democratic in nothing but name, according to him. Ayalew Mesfin buckled down to the preparation for ሰላም ለኢትዮያ – Peace for Ethiopia, a record just as virulent as the previous ones and went back on stage for a unique concert in Nazareth (Ethiopia). There, a new dramatic turn of events: in the middle of the show, the singer received a high voltage electric shock through his microphone.

“3500 watts! Fortunately, the microphone had just escaped my hands two seconds earlier,” says Ayalew Mesfin, laughing bitterly. ”Otherwise the EPDM would have succeeded in its mission, and I would have died fried on stage in front of thousands of people. I was bothering too many people, it became really dangerous.” Then cornered, a heartbroken Ayalew Mesfin eventually left his country in 1998. 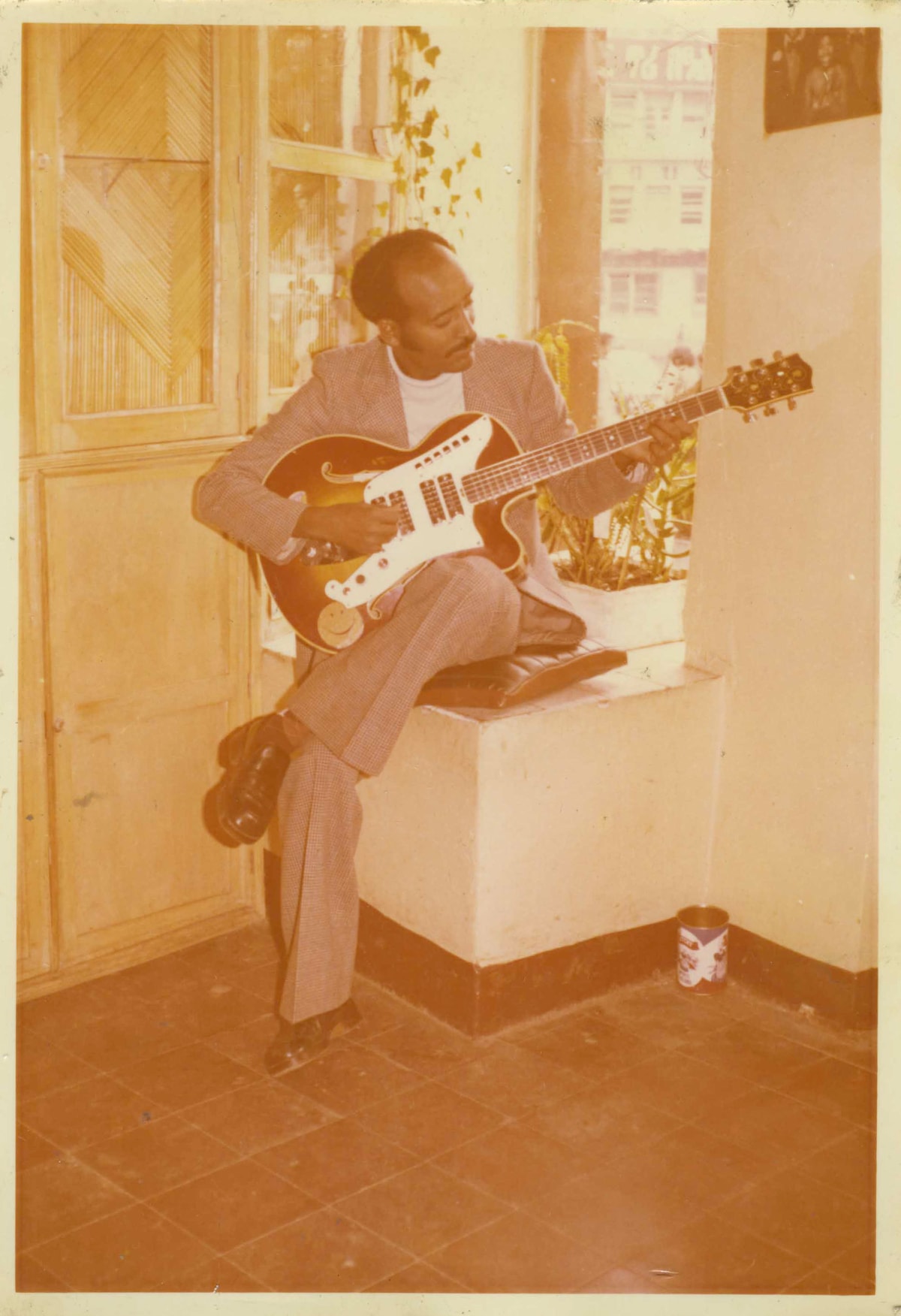 “I have forgiven everyone who betrayed me, imprisoned me, tortured me. My life and my career could have been on a different scale, that’s for sure, but I have no regrets,” he says. Today if his musical activities have nothing to do with his former life as a protestor-superstar in his native country – especially because a large part of the Ethiopian diaspora lives in Washington DC, and not in Denver like him –, the almost 80-year-old Ayalew Mesfin seems very far from surrendering. First because he is still at war. ”Francis Falceto bought the rights for the recordings from Amha Records and Kaifa Records for his Éthiopiques series, but I never received a single penny: this is theft! It makes me very sad but you will see, one day, the judgment will come,” he exclaims, before adding, “I hate YouTube too”. In response to the accusation, a somehow surprised Francis Falceto formally denies having bought any of the aforementioned rights: “I was only a go-between, I own nothing, I own none of the rights on the masters published in the Éthiopiques. The licenses, he says, were directly signed between Amha Records, Kaifa Records and Buda Musique.”

Since the release of Hasabe (My Worries) on Now Again, Ayalew Mesfin can move forward, at last, especially as he’s working on a new album! Except that with the recent inter-community violence – between the Gumuz, Sinasha and Amhara ethnic groups in particular – and the military attacks at the Eritrean border, both events that have already caused the death of dozens of civilians since the start of the year, the musician cannot give resistance a miss. “ ‘Hasabe’ means ‘my worries’ and, believe me, this song is still very actual when I see that Ethiopia can not find peace. So on my next record – the most beautiful of all – I will lash out at Abiy Ahmed, Ethiopia’s Prime Minister, and at all the incompetent African leaders who steal their own people to get rich themselves.”

Since our conversation, Abiy Ahmed has received the Nobel Peace Prize but that day, Ayalew Mesfin concluded by saying: “I am still an activist and the struggle continues.” At that moment, the translator and first fan of the singer burst into tears, as if carried away by Mesfin’s panache and asked me: “Don’t you think he looks like Mandela, Luther King or Buddha?” Check for yourself on stage at Le GuessWho ? festival! 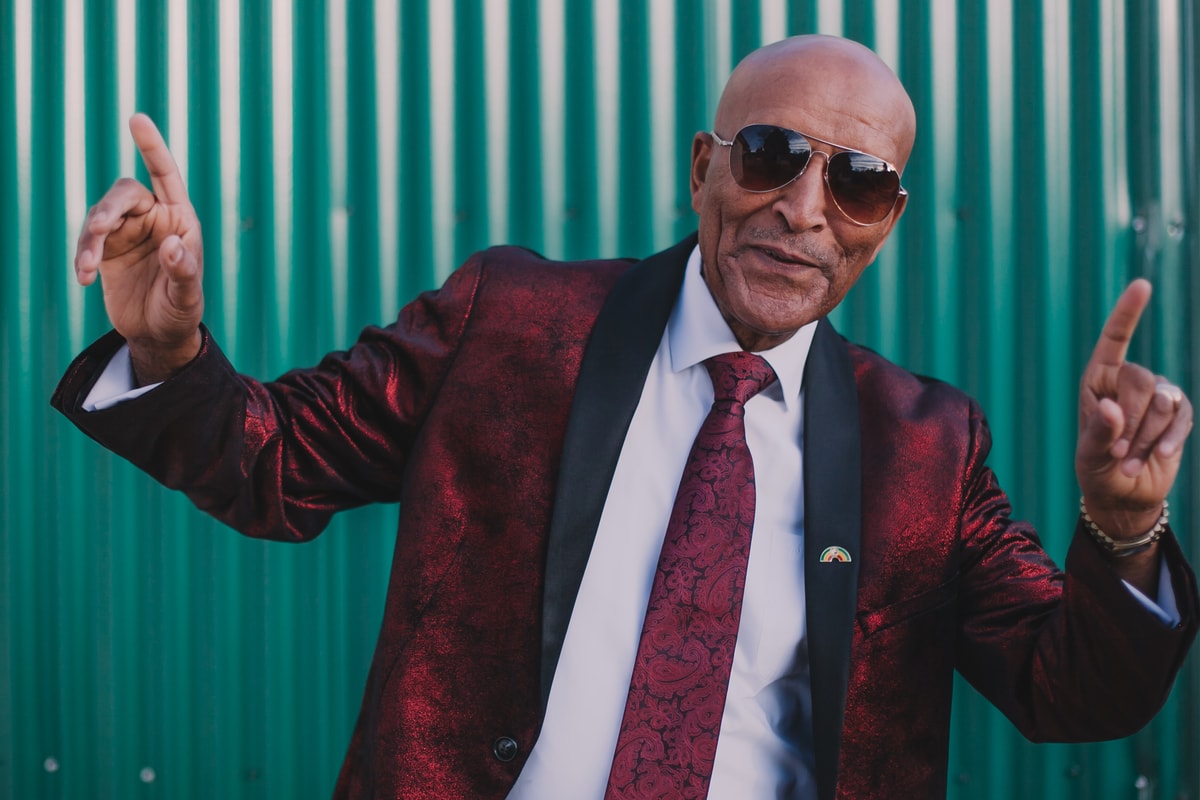