In Africa, metal has caught on and brought new bands to the foreground, offering an original take on the genre which blends with African heritage. In West Africa, the Togolese group Arka’n is one of the most successful expressions of this trend. PAM spoke with them at the Access event in Ghana.

“Metal comes from rock. Rock comes from blues. Blues comes from the Blacks deported to America. The very basis of metal comes from home. Metal is African!”. These are the words that introduced the memorable show Arka’n delivered at the ACCES 2019 conference in front of a shaken and delighted audience. In Accra, the band was only 3 hours away from their home base, Lomé, from where the five members come from. Togo and its culture have an important place in their music. Indeed, the particularity of the group is their original fusion between Togolese musicality and folklore and pure and rough metal; metal-fusion, afro-metal, new metal, their genre does not answer to any classification. Their album Za Keli, released in February 2019, has generated a growing craze in West Africa, global Africa and in different parts of the world by the power of internet. If Mass Aholou (percussions) et Francis Amevo (bass) left Accra early to go home, PAM managed to meet Rock Ahavi (vocals and guitar), Richard Cico (drums), Enrico Ahavi (vocals) and Béatrice Manigat (manager).

Can you tell us about Arka’n’s debut?

Rock: Arka’n was created in 2009, first by me alone with guitar, piano and voice. Then in 2013 I had the opportunity to engage with other musicians to form a real band. It was a formation that lasted until 2016, when we created the current formation.

How did your life in Togo influence the musical direction you chose?

Enrico: I wouldn’t say Togo helped us (laughs). But it did bring the traditional side of our music, the fusion between metal and our culture. It’s mainly our father who brought us rock albums.

Rock: At a time in Togo there was also a real rock, blues and jazz culture between Togolese and foreign musicians. There was a town on the edge of Lomé, Kpalimé, where we used to buy ACDC or Scorpions cassettes at the market! It was easy. That’s when we started out with rock and then, with the Internet, we discovered other forms of rock, like metal. We listen to Metallica, Slipknot… For us, our fusion with Togolese rhythms is not sought after, it’s natural. It’s as if we were speaking metal in our own language. But I noticed that when we listen to metal drum patterns, they sound similar with the patterns we play in our villages.

Richard: I started with Ndombolo. Then I came across Jimi Hope: he’s the one who makes rock music in Togo. I got a taste for it and with Rock I discovered metal. I’m really into metal now.

Beatrice: The question of Arka’n’s influences often comes up, and it’s always difficult to answer. People often try to place the band by saying “Arka’n is new metal, it’s a little bit of this, a little bit of that, they’re influenced by that”. They find it hard to understand that a band can come up with something completely innovative. I think that’s what makes the band special: it’s new, it’s unpublished. African metal critics and specialized magazines were forced to admit that we never heard that before. People are starting to understand it, especially after seeing Arka’n concerts. It’s a band that’s making history, and that can inspire other artists to think that they too can create something new.

In your concerts, you mention a metaphysical portal that your music is supposed to open. What link do you make between spirituality and metal?

Enrico: The notorious dark side of the Force (laughs)! Western metal is often perceived as visually very marked, with a dark imagery, which may for some evoke occult or even satanist forces, although it is not always the case. But at Arka’n, spirituality and metal go together. Our messages are spiritual: we talk about depths, about the forces that surround us, about African spirits… Even in the compositions and the lyrics, you can see that. There’s a connection with spirituality because that’s what we are. We can’t escape from ourselves and we were born spiritual.

Rock: Often the spiritual is what we don’t see. However, for Arka’n and Africa in general, physical forces and things are not two separate things. On the contrary, one is the extension of the other, its continuity. Bodies, stones, trees have souls. When we try to see the energies, it’s something else. We don’t separate the spiritual from our music, everything is aligned. The word “Arcane” refers precisely to hidden sides of the universe.

How are you perceived by different African audiences?

Richard: I think when you go look for our videos on internet, you will see that people like it. The numbers are growing exponentially, and the fact that we were selected for the ACCES conference shows it even more.

Rock: Our music is not a European version of metal that we grafted in Africa. We speak Ewe, our local language, so people understand the spiritual meaning of what we sing. The rhythms we play are not purely European, and people can identify with them. Sometimes we play Arka’n to a guy from the village and he tells us it’s good music from home, he can relate to what we do, just like Western metal fans. Because what we do is kind of unique and not locked in a pop tendency, our audience is not divided into age groups either. Everybody can listen to us.

As insiders, how do you think the African metal scene is doing and evolving?

Rock: The scene is evolving a lot in Africa, especially in Eastern and Southern Africa: Uganda, South Africa, Botswana, Kenya… In North Africa as well: in Morocco or Tunisia for example. Metal’s really taking off because metal is about artists who claim. Metal has almost the same consciousness as reggae. It’s a pretty aggressive genre, that tells a kind of rage very present in Africa. 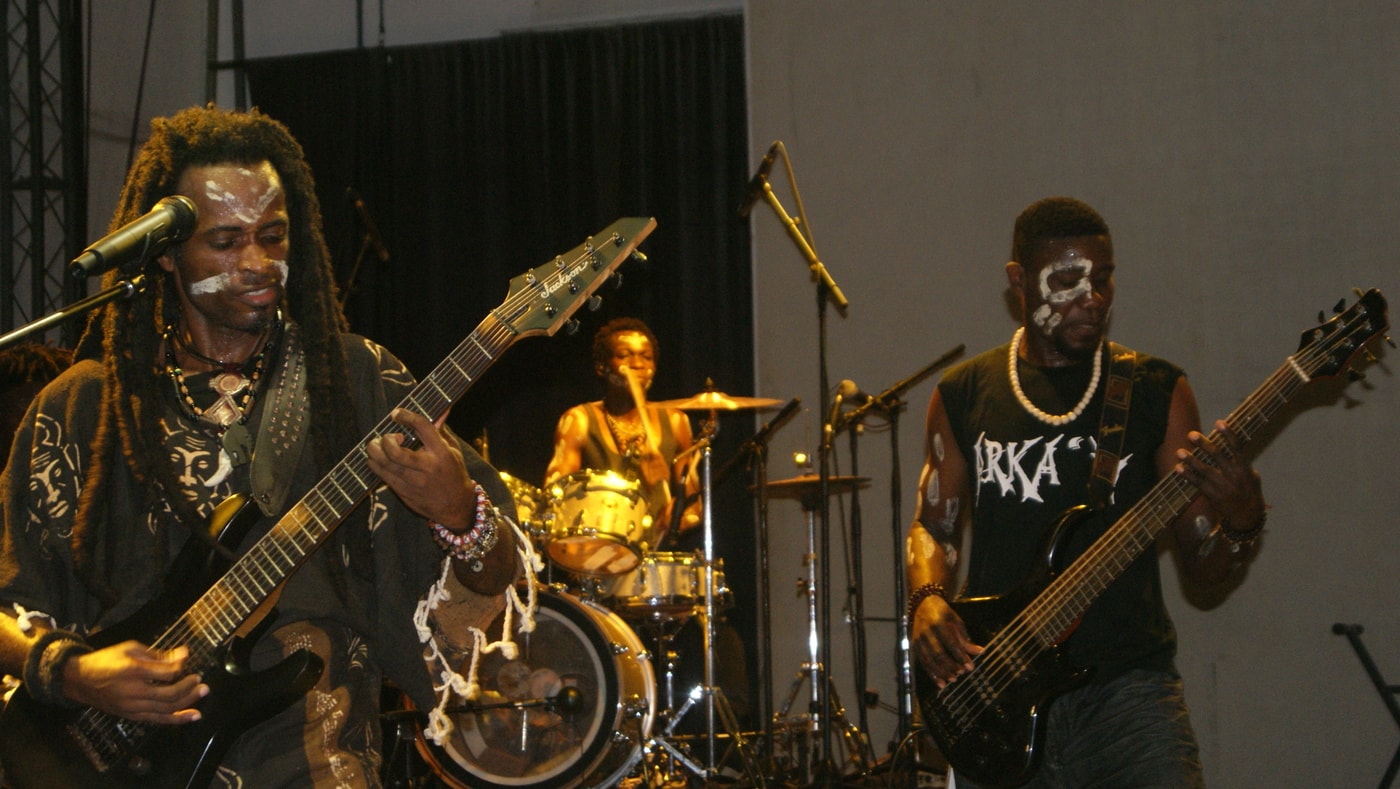