Aziza Brahim: "Those who seek war have never known it"

With Sahari, a more electronic-music-oriented fifth album, the emblematic musician and activist of the Sahrawi culture sings the pain and hopes of the exiled.

In Hassaniya or Spanish, Aziza Brahim’s vivacious poetry carries the voices of refugees from the Western Sahara (an invisible, yet resistant and militant part of Africa) and more generally speaking, that of all exiles. A radiant presence and a voice that transcends all of the senses, Aziza Brahim was at the Fiesta des Suds festival in Marseille, France, when we met up with her. She explains her approach and the meaning behind the songs to PAM, from her latest album.

Songs like “Sahari” and “Mujayam” (“Camps”) refer explicitly to your own experiences. Others like “Lmanfa” (“Exile”) or “Hada Jil” (“This generation”) have more of a general understanding. With this album, did you intend to move towards expressing a more universal message?

My songs talk about my own experience of exile as a migrant: from the desert to the heart of the old continent [author’s note: Aziza Brahim was born in 1976 in a refugee camp in Southern Algeria, then spent much of her adolescence in Cuba and has lived in Barcelona for almost twenty years now].

My aim is to denounce the extreme living conditions that prevail in refugee camps and the great injustice that prevents Sahrawi refugees from returning home. I tried to capture the feeling of nostalgia my elders express for the land that was taken away from them.

The normalization of injustice is something that Sahrawis know too well, but we are not the only ones concerned, unfortunately: there are currently 70 million people forcefully displaced in the world, and 26 million of them are refugees. Inevitably, this situation has affected me and my writing has evolved accordingly.

With Sahari you explore electronic sounds under the guidance of the Catalan female artist Amparo Sánchez, leader of the Amparanoia group. What was it like working together?

We’ve been friends for a long time and she’s an artist I deeply admire. It has been quite some time since we’ve wanted to collaborate and it was even more important for us as Amparo is a singer who advocates mixed-race relations in Spanish society.

She suggested introducing electronics and that meant working in a very different way. My musicians and I are used to recording everything live. This time, each of us recorded separately, and then we assembled the pieces of the puzzle.

For me, the key elements were guitars and vocals. Amparo dealt with the electronics, keyboards and saxophone. She helped me establish the dialogue I had in mind between the traditional Sahrawi percussion, the “tabal” drum, and the electronic percussion. And she allowed me to find balance between the past and present, between African and European music. The search for communion through music involves traveling across different territories: geographical and cultural, individual and collective, conscious and unconscious. And to find harmony at the crossroads.

“Cuatros Proverbios” (“Four proverbs”), the opening track, is very much stripped back: your voice supported only by percussion. What is the meaning behind this song?

It’s a song about the power of peace and the total rejection of war. Here is what I say:

“There are only two words: one is ‘war’, the other is ‘peace’.
Those who seek war have never known it.
The purpose of the dialogue is to conclude it.
Never play with peace.”

I chose this song as the opening track because it allows an opportunity to hear the roots of my music and to understand the blend that follows. I recorded two tabal drums to play the sounds of the desert. There is also an entire set of sabar and one djembe. It’s a combination of West African and my own culture since the tabal is the instrument of Sahrawi music. It is important for me to push the tabal to the fore, especially since it has been reserved solely for women to play for centuries.

You generally compose your own lyrics. However, for Sahari you co-wrote a song with Amparo Sánchez (“Las Huellas”), and the song “Ard El Hub” was written by Zaim Alal. Who is he? And what does this song talk about?

Zaim Alal is a great Sahrawi poet, and I identify a lot with his work. Two years ago, the last time I went to visit refugee camps, we met and he wrote this poem for me to sing. “Ard el hub” means “land of love” and talks about the impossibility of us returning to our homeland. It’s a very important song to me, and it gives me a strong sense of belonging.

“My homeland, land of love,
cradle of my childhood.
For you desires rise
and kiss the sky.»

You took the photographs that illustrate the album’s booklet, except that of the cover. Can you describe it and explain why you chose it?

In the foreground, you see a little Sahrawi girl named Aziza. She is wearing ballet shoes and a white tutu. Behind her there’s a tent and buildings of a refugee camp located in the south of Algeria. This picture was taken by a great female friend of mine who is also a great photographer, Ana Valino. For me that was the perfect image for the record because it is representative of Sahara’s musical context: it conveys the hope and courage of the people fighting for their future.

Sahari, out on 15 November in digital and CD/LP via Glitterbeat Records. 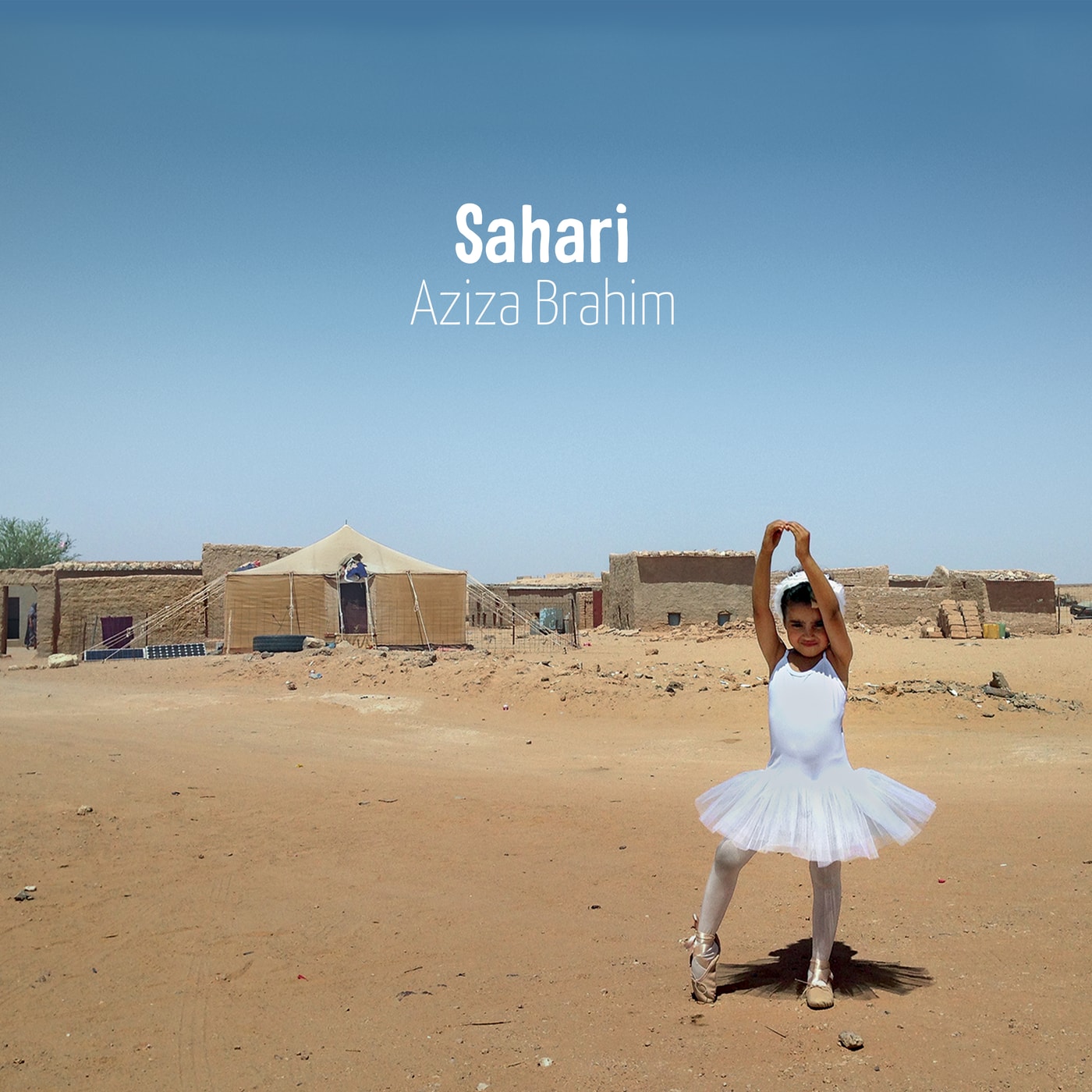