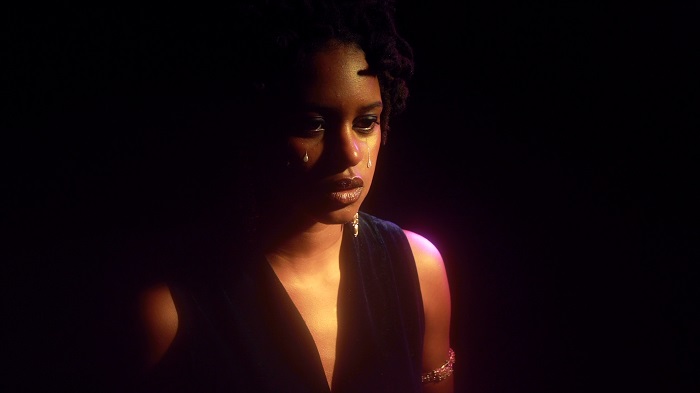 A member of the new Amazones d’Afrique, Niariu dives into a solo career with an introspective debut EP entitled Story of a Sad Mermaid. Listen to the track “The Entrance” with Saul Williams exclusively on PAM, with an interview of the artist .

“Niariu” means “cat” in Fulani. This is what the artist’s entourage liked to call her when she was a child, and she has apparently lost none of her mischievousness and unpredictability. Born Tiguidanké Diallo around Paris to Guinean parents, Niariu travelled back and forth to visit her family in Guinea and the United States. She quickly integrated the musical cultures of the two countries, African music and reggae on the one hand, soul and RnB on the other, and today blends them in a discreet electronic substance that she uses to poetically lay her words on. The singer, who can be seen wearing an Afro-futuristic outfit on the cover of the latest Amazones d’Afrique album, offers five songs exploring her conflicting relationships with love, the concept of seduction, doubts and disappointments. Alternating between trip-hop and spoken word, metaphysical rap and avant-garde song, Niariu explores the melancholy and hopes of a little self-taught mermaid in a world that doesn’t always make sense.

Why did you wait so long before going solo? What was the trigger?

I think there were several factors. There was no trigger, it was more of a process. I had to believe in myself, in my music, before I jumped in. First of all, I had to get rid of all my mental barriers about accepting to be an artist and wanting to make a career out of it. It’s a bit of a classic story about being part of the “First Gen” and deciding to follow an uncommon path. Then I had high expectations of what I wanted to offer. I always wanted to share my own sound universe and at the same time I was afraid of being put in a box. The famous false battle between having a “niche” sound and a “mainstream” sound. It took me a while to find my place, to decide what I wanted to release first. I’ve done a lot of collaborating and writing over the last few years, which has helped me refine my vision and mature. I realised that I was only truly satisfied when I was involved in the creative process from start to finish. Being self-taught, I had to learn on the job, to appropriate several tools to better communicate what I wanted. I had to go all the way to the end so that people would finally understand what I was getting at. All this allowed me to grow, to evolve and to have more confidence before launching myself.

Can you explain the metaphor of the sad mermaid? Who is she?

I’ve often been accused of being detached in love, of having a heart of stone and of being a heartbreaker, hence the parallel with the mermaid. The fact of lending an emotion to the mermaid was a way for me to demystify her, to make her human. The reality is that behind this distant character who feels nothing, there is simply a woman who does not have all the keys to be able to indulge in love. In the end, nothing very intimidating when you dig into it, it’s a rather sad story.

You have travelled Guinea, France and the USA. Where are these different influences on this EP?

I think the fact that I was confronted with several environments opened me up to the world and music was the common thread in all these adventures. Beyond travelling, I would mostly go to my family’s house so each time it was a different way of life. In Guinea I often hung out with my uncle, the Peul singer Lama Sidibe. At home, I would switch between Congolese classics, US and French rap classics, zouk, Senegalese music, Guinean music, French musicals from the 2000s and some variety sounds, all the pop sounds of the time, the making-of tape of Michael Jackson’s Dangerous on a loop or the Spice Girls’ tape – in short a real melting pot. Then when I went to my cousins’ house in NYC we would spend our days in front of BET singing about the latest rap and RnB videos. We’d come back every summer with lots of albums and bootleg compilations. Then when I went to school in my little bourgeois commune, my taste was more electro, rock, pop rock. There was tektonik on one side, and my cousins were into logobi on the other side. Then, there are the weddings where we revise our classics. The car, where it’s the teenage generation. My older sister introduced me to Amy Winehouse, Paolo Nutini, the Kooks, Red Hot Chili Peppers, etc. Then, when she moved to Canada: George Clinton, Erykah Badu, Saul Williams and many other artists. And me, the more I grow up, the more I dig on my own: the Datpiff era, SoundCloud, the forums… All that to say that having a family scattered in super different environments allowed me to have access to a whole lot of music and I think it plays in the way I compose. I’m very melodic and I do a lot of code switching. I go from a more sung tone to a more rapped, slammed tone. The same goes for the instrumentals, I need them to sound like me, to be soaked in these different experiences. That’s why I often use several layers of voices to dress up the sound in my own way.

Tell us about Taphari and Saul Williams. Why did you call them?

Taphari is a rapper from the emerging New York scene. We met at the airport when I was coming back from NYC, and it was love at first sight. It was very natural. One day we hang out at Bamao Yende’s, I was doing vocals on “Illusions”, the vibe was cool! Then Taphari got inspired and wrote a whole verse in one go. He recorded it straight away and later when we validated the EP it was a no-brainer to keep his verse, which complements the sound so well. All my collaborations are very organic. I never thought I would ever release a sound with Saul Williams. He is literally one of my biggest inspirations. My older sister introduced me to the movie Slam in high school and that’s where I started writing. Her lyrics are so transcendent. I will always remember the day we played with the Amazones after he and Sister Nancy “blessed the stage”. I had the pressure of playing in front of him but it ended up being one of my best gigs. The energy was so intense that I ended up in a trance. He came to congratulate me afterwards, I was over the moon! When I wrote “The Entrance”, I was inspired by him in the way I sang my lyrics. I never thought that in 2020 he would agree to collaborate. He brought wisdom to the sound. I’m so happy to have these two unique artists on this first EP. Beyond their talent, they are beautiful souls and that’s the most important thing.

Follow Niariu on Instagram and listen to her exclusive set on our 30th PAM Sound System Radio Show below:

Story of a Sad Mermaid by Niariu, out on January 7.