Fatoumata Diawara have shared a new song ‘Nterini’, first extract of Fenfo, her new record since 2011’s Fatou. It arrives May 25 . Watch below the video directed by the photographer and Ethiopian artist Aïda Muluneh.

‘Nterini’ (which means “my love / my confidant”) tells the story of a migrant, and evokes the sorrow felt by two lovers separated by distance. It includes the lyrics, ‘My love has gone far away’, ‘And may never come back’, ‘He may never come back’ and ‘What am I to do?’.

The video was shot in the Danakil Desert in Ethiopia. Aïda Muluneh was inspired by Afro-futuristic aesthetics, as well as visual elements borrowed from the Dogons, a Malian ethnic group.

Accomplished multitasking artist, Aïda Muluneh worked as a photojournalist at the Washington Post and her work can be found in several international publications. Also as an exhibiting artist, Aida’s work has been shown in South Africa, Mali, Senegal, Egypt, Canada, United States of America, France, Germany, England, China, to name a few countries. A collection of her images can be found in the permanent collection at the Smithsonian’s National Museum of African Art, Hood Museum and the Museum of Biblical Art in the United States. As one of the leading experts on photography from Africa, she has been a jury member on several photography competitions most notably the Sony World Photography Awards 2017 and the World Press Photo Contest 2017. 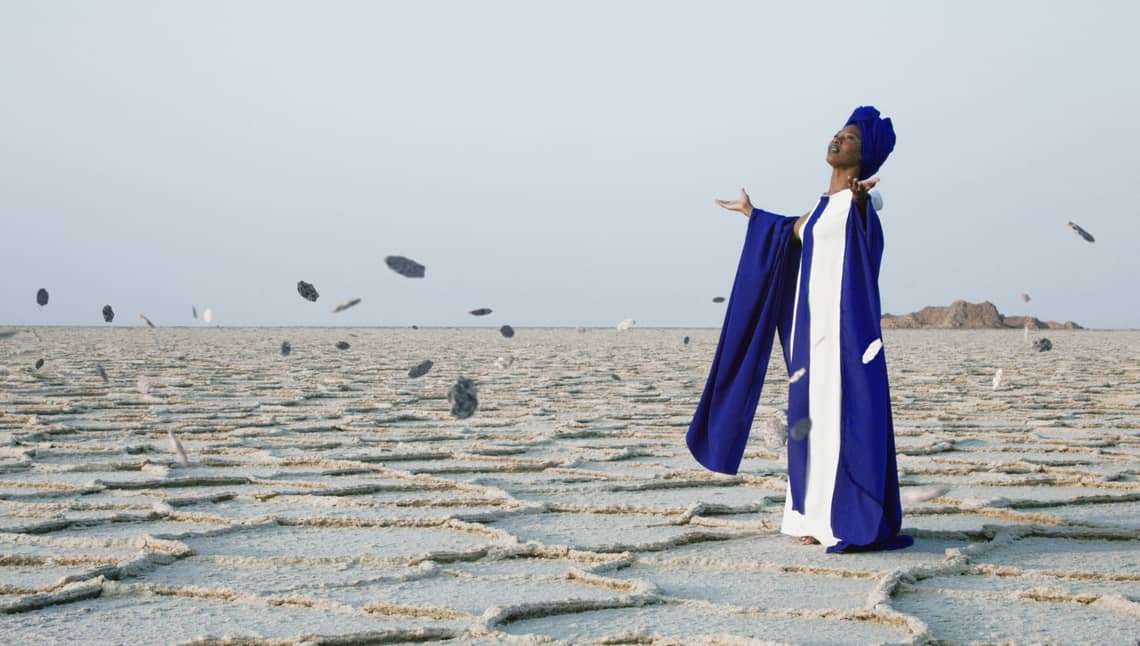 Recognized as one of the most beautiful voices of modern African music, Malian singer Fatoumata Diawara has worked with many contemporary musicians, including Bobby Womack, Herbie Hancock and Cuban pianist Roberto Fonseca, whom she accompanied on tour. Her first album Fatou was awarded No.1 album 2011 in the world music charts, where it remained for 6 months. It was also given No.1 in several end-of-year album polls including The Times and Mojo. She has also composed and performed the lead song for Timbuktu’s soundtrack.

Co-directed with french artist Matthieu Chedid, Fenfo has been recorded in Mali, Burkina Faso, Barcelona and Paris. Fenfo is set to be released on May 25.

Read next : Oumou Sangaré, from Wassoulou to the dancefloors