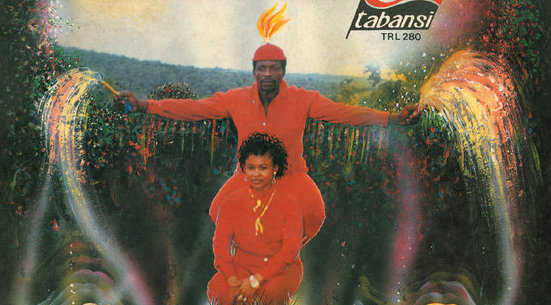 The British label gives a second life to the albums Akalaka and The Power, recorded by the figure of igbo highlife, Victor Chukwu. John Armstrong, curator of the Tabansi reissues, provides some background.

Recorded between the late 70s and early 80s, Akalaka and The Power have both become as untraceable as their mysterious creator. Singer and saxophonist, Victor Chukwu – deceased for more than 20 years – left almost no trace of his spiritual highlife, except for a bunch of LPs now sold on Discogs for a few ingots. Forty years later, BBE aims to resurrect this pocket of positive waves with a double reissue. The release features seven long songs in total, ones that preach the pride, dignity and identity of the Igbo people, as seen on the exclusive track below. The journalist John Armstrong shares a slice of culture about the guitar bands from eastern Nigeria and the peaceful controversy between Ghana and Nigeria over the appropriation of the highlife genre.

“I’ve seen several social media controversies raging on West African music lovers’ threads recently -mostly good-natured- about the origins of highlife. Sometimes, Ghanaians light-heartedly ‘accuse’ Nigerians of appropriating ‘their’ music, but frankly, all the Nigerian musicians I’ve spoken to readily identify Ghana as the birthplace of highlife, and the inspiration for Nigerian highlife- especially the Igbo styles from the South East.

The Ghana influence on Nigerian guitar bands has been extensive since the early days, both on the juju groups in the West and on the Palm-Wine (acoustic guitar/percussion) groups in the Midwest and East. As early as the 1930s ‘Konkomba’ Ghana  drumming bands were touring Nigeria, and in 1935 Ghana’s legendary Cape Coast Sugar Babies orchestra and the Axim Trio toured, followed in the early 1950s by the great E.T. Mensah’s Tempos orchestra and E.K. Nyame’s band.

But as the 50s bled into the 60s, the Igbo guitar-band highlife style came to prominence, with its stripped down bass/electric guitar/percussion line-up, only occasionally augmented by a horn section. Later, Oliver De Coque added a distinctive Congolese soukous guitar flavour to proceedings, and it was this train of events that finally gave birth to a totally distinctive, Igbo guitar highlife genre, beloved not least by the ‘picoteros’ of the colombian coastal Champeta carnival soundsystems, where Igbo highlife rarities such as Victor Chukwu’s Akalaka changed hands for massive sums, later to be ‘covered up’ (like  Northern Soul rarities and Dub reggae plates), but with Spanish titles, like this one of Victor’s :

All this time, Uncle Victor continued to tour continuously, although his records are few and far between, the Tabansi releases and one LP on JetStar being the full tally that we know of.

Uncle Victor Chukwu -aka Chuks, Actor Victor- passed away quietly almost a quarter of a century ago, Today, he’s scarcely remembered, even by Igbo highlife diehard collectors and fans. And yet his tiny recorded output is up there with Stephen Osadebe’s 45 LPs and Oliver De Coque’s 70-odd releases, in my opinion.

The albums will be out on November 6. Pre-order here.