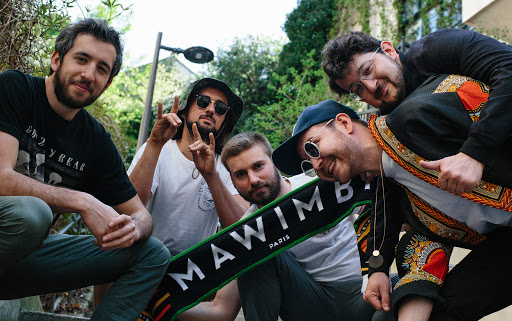 The Parisian collective Mawimbi has released “Fôli Kadi,” a new cut from their first album, to be released in the spring. Listen to a sneak preview with.

Last November, Mawimbi surrounded itself with the Ghetto Kumbé trio for “El Caribe,” the first track from their upcoming dancehall-electronic cumbia album. Since 2013, this collective of “Afro electro” DJs  has worked to boost African, Caribbean and South American music through parties, radio broadcasts, compilations and remixes. Many festivals have put their trust in these up-and-comers, partly due to Loya, Onipa and Afriquoi having been discovered as a result of their music.

While the Afro-electro spirit is respected on this second single, it promises to be a wider, more eclectic project. On “Fôli Kadi,” they collaborate with Malian singer Fatim Kouyaté and kora player Chérif Soumano, both of whom they met through Dom Peter, the man behind the Blanc Manioc label and leader of the group, Midnight Ravers. Fatim Kouyaté has always championed the griotic traditions from which she emerged and does so here, having honed her vocal power over time and through collaborations, notably with Rokia Traoré and then the Midnight Ravers. She gives this single the allure of a summer festival hit, thanks to the powerful, yet subtle, fusion between electronic arrangements, kora and cymbals, which leads to a joyful Mandinka firework of a track.

If the prospect of a vinyl version already appeals, know that the collective launched a crowdfunding campaign on February 22 on the Kisskissbank platform to get it off the ground!