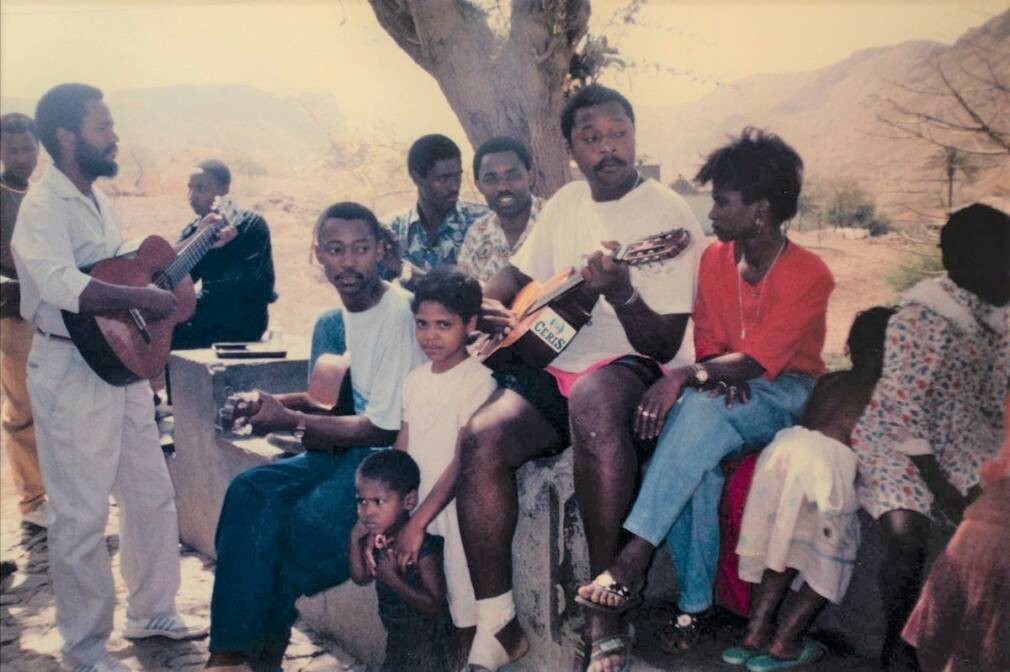 Pascoal with friends and family in Cape Verde, 1980s

The Ano Nobo Quartet captures the history of Cape Verde

The band has announced the release of The Strings of São Domingos, where the guitars will bear witness to the adventurous life of bandleader Pascoal, and legendary composer Ano Nobo.

Pascoal “El Bruto” is a character on his own. An ex-soldier of the FARP, the armed wing of Cape Verde’s independence struggle, the Cold War’s different events dispatched him in the whole world, from Cuba to Crimea to East Berlin, where he always managed to instruct himself on the local ways of playing music. Nowadays, Pascoal leads the Ano Nobo Quartet along with fellow guitar maestros, Fany, Nono, and Afrikanu. The band was named after Cape Verde’s most legendary composer, Ano Nobo, Pascoal’s mentor and father to the rest of the group. New York-based Ostinato Records has just announced the release of The Strings of São Domingos, a new album from the four musicians.

The Strings of São Domingos, in addition to being a tribute to koladera, or coladeira, a guitar-driven, subtly rhythmic sound of a lighter spirit, is also an intimate venture into Pascoal’s rich and adventurous life history, shaped by the Cold War and the legacy of Ano Nobo. The haunting guitars are inflected with twangs of Cuban salsa, Spanish flamenco, Brazilian samba, Jamaican reggae, Argentine tango, Mozambican marrabenta and Black American blues, and serve as a layer for elegant and saudade filled songs.

This album was recorded in three locations on Santiago Island: in Pascoal’s home in São Domingos, the small hometown of Ano Nobo that sits amid the cascading hills of the countryside; in a secluded, remote recording space in the north of the island; and near Santiago’s northern beach cove without any electricity. The songs “Sociedad di Mocindadi”, “Canta Ku Alma Magoado” and “Tio Bernar” are already available.

The Strings of São Domingos by The Ano Nobo Quartet, out on February 25 via Ostinato Records.