Orquesta Akokán: Cuba, From the Heart 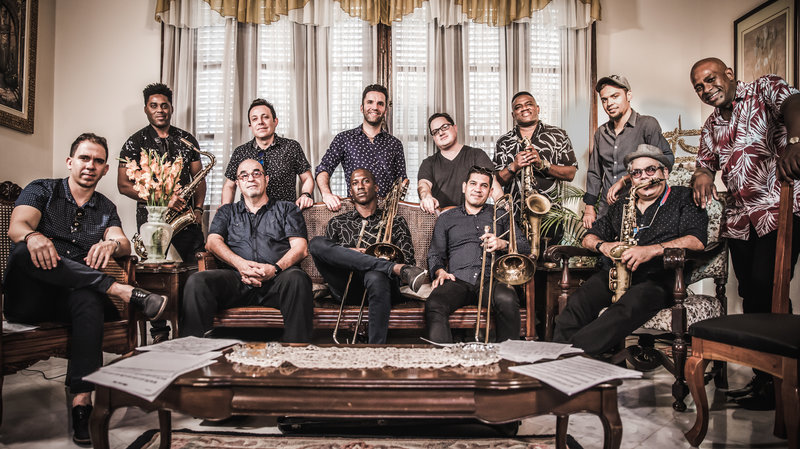 The orchestra, which brings together all-star Cuban and New York musicians, brilliantly resurrects the great era of mambo.

Akokan means “from the heart” in Yoruba, a dominant African language throughout Afro-Cuban and Afro-Brazilian cultures and religions. Through these cultures and religions, much sacred and secular music has been born; and well after the abolition of slavery, the music continued to travel the globe. Orquesta Akokan is also the name of this orchestra, which is reminiscent of Banda Gigante  of Benny Moré, aka “El Sonero Mayor.” In fact, beginning with José “Pepito” Gomez’s singing on the very first track, we are transported to Havana in the 50s, when the mambo reigned supreme.

The Cuban born and raised singer grew up with the songs of “El Benny” or the tireless Perez Prado (the album gives a nod to “Babarabatiri”). It was in New York, where Pepito Gomez had taken up residence since 2008, that he met Jacob Plasse, founder of the label Chulo Records, and Mike Eckroth, pianist and Cuban music aficionado. Eckroth ended up arranging the album, which is as ambitious as it is successful, and which is scheduled for release March 30th.

Recorded in the Cuban capital, in the legendary Areito Studio, it brings together, in addition to the trio, pianist Cesar “Pupy” Pedrosa (Los Van Van), the saxophone section of the famous Irakere and the percussionists of NG La Banda. In short, it’s the crème de la crème, but that does not necessarily guarantee a good record. But Orquesta Akokán, also the name of the album, proves to be a magnificent tribute to a musical color and to an era whose music had seemingly disappeared without a trace following the death of its shining stars like Arsenio Rodriguez, Prado Perez, Benny Moré, and Israel Lopez Cachao…

The opening title “Mambo Rapidito” is one of the greats. After a prelude rich in harmonious piano dissonances, there is the brass that kicks it all off with an explosion. Then, there is silence and suspense. Bass and bell wade into the mix, while the singer, José “Pepito” Gomez instructs: “Savor that, mama, here comes the mambo!” The brass instruments snap back to take their place with the rhythmic motifs typical of mambo…The beat is on, and no one will come out unscathed, or at least without an inescapable desire to dance.

The Orquesta Akokán dabbles in the Cuban repertoire, with rumba and bolero, and also pays tribute to Elegua the deity of caminos, who opens or closes all roads and paths. Throughout the different styles, there is always special care given to the sound. The Afro-Cuban drums, the glittering chandelier of brass, Pepito Gomez’s voice that lingers, full of feeling … In short, suffice to say that we like this album. It rightfully resurrects an era that we never knew, and thanks to Orquesta Akokan, has a seemingly long life ahead.

Read Next: Sonido Gallo Negro, Back With its Mystical “Cumbia Ishtar”

8 albums to discover this week
News