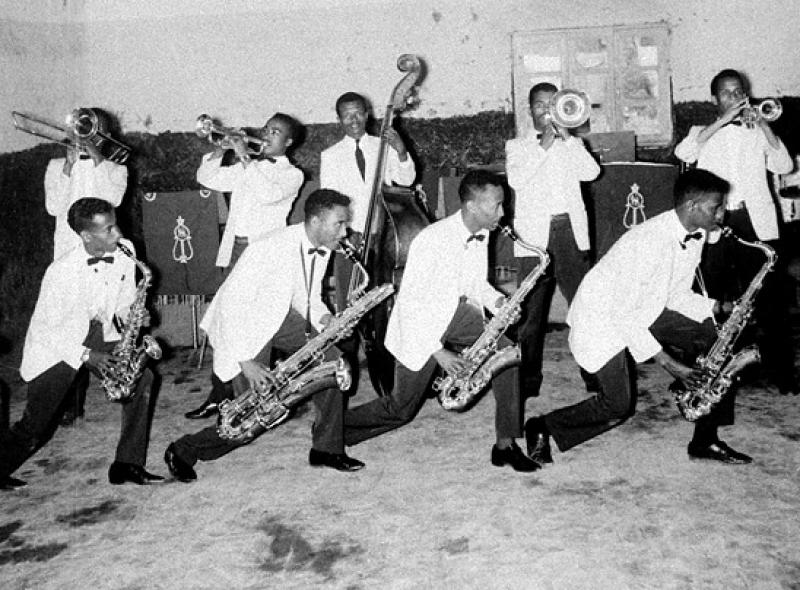 Reissue of the original Amha Records compilation that revolutionized the Ethiopian society 44 years ago. A great alternative for ethio-jazz lovers who cannot afford to pay for the hard-to-find 1972 record.

When it comes to Ethiopian music one generally thinks about the famous Ethiopiques series, released by Buda Musiques in 1996, later popularized by Jim Jarmusch 2005 film Broken Flowers, whose soundtrack featured several Mulatu Astakte songs from the 4th volume. French digger Francis Falceto was the main producer of this 29-CD-only series whose first volumes remain an easy and thorough access to Ethiopian and Erythrean music from the ’60s and ’70s, the so-called “golden era” of the countries’ local music, recorded and distributed by the three major labels : Amha Records, Kaifa Records, and Philips-Ethiopia.

Amha Eshèté has been the boss of Amha Records since 1969 – he was 24 back then! – and had produced around 50 singles and one LP when he decided to release his best productions on five LP vinyls between 1972 and 1973. The series of compilations titled Ethiopian Hit Parade turned rare-to-find and prohibitively priced collectors gems nowadays, selling for up to 300€ online. Those compilations were a true provocation from this young outlaw, at the time of the imperial censorship that had been ruling the country since 1948, when Emperor Haïlé Sélassié had decided that any music record entering or leaving the country should receive his approvement.

Amha Eshèté explains the reality of his business activity: “I was a young, independent, unknown and gutsy Ethiopian just starting out in the business. I could do things that [others] would never dare. I thought, nobody’s going to kill me for this. At most I might land in jail for a while. (…) There has always been censorship in Ethiopia, even under the Emperor. To publish a newspaper or a book (or a record), you needed a censorship visa from the Ministry of Information. But as they had apparently forgotten all about the Imperial decree regulating record production, they had no problem with my own records. When the records arrived, Aghèr Feqer [the censorship department] threatened me, brandishing the Emperor’s order, but without much conviction. They knew that they had produced almost nothing in the past years, and it all just died down. I didn’t even have to pay them anything, as they had claimed I should.”

The Ethiopian Hit Parade series are the most direct evidence of the societal revolution that impacted the music played in ’70s Ethiopia and Erythrea, coming from an insider who was living this breakthrough every day. What is at stake here is “ethio-jazz”: traditional music roots mixed with the contemporanean Western rhythm’n’blues, soul and jazz songs one could hear on the American military radio broadcasting from Erythrea’s military base, and in Addis Ababa’s clubs and discotheques. The result is a unique and syncretic groove, as much energetic and psychedelic, with horns, organs, drums and guitars exploring the infinite possibilities of fusion. Some of the songs were clandetinely recorded at the Empire-controlled radio, with the help of a courageous sound engineer.

If it wasn’t for Amha Eshèté’s boldness, most of this amazingly modern Ethiopian music and thick sounds would have vanished into thin air. And forty-four years later, if it wasn’t for Heavenly Sweetness, this music would have been never reached our turntables, or the modern online music streaming sites. Hopefully, the French label has started to reissue this amazing hard-to-find – if at all – series, featuring tracks that never appeared elsewhere before, with courageous and fearless Ethiopian groove pioneers as Mulatu Astatke, Alèmayèhu Eshèté (who proudly sings “Addis Abeba is My Home”) and their fellow countrymen. An Ethiopian landmark compilation made by an Ethiopian insider for the Ethiopian, that eventually made it to the whole world of today’s music lovers.

KUTU take us to Addis Ababa with “Dantada”
News