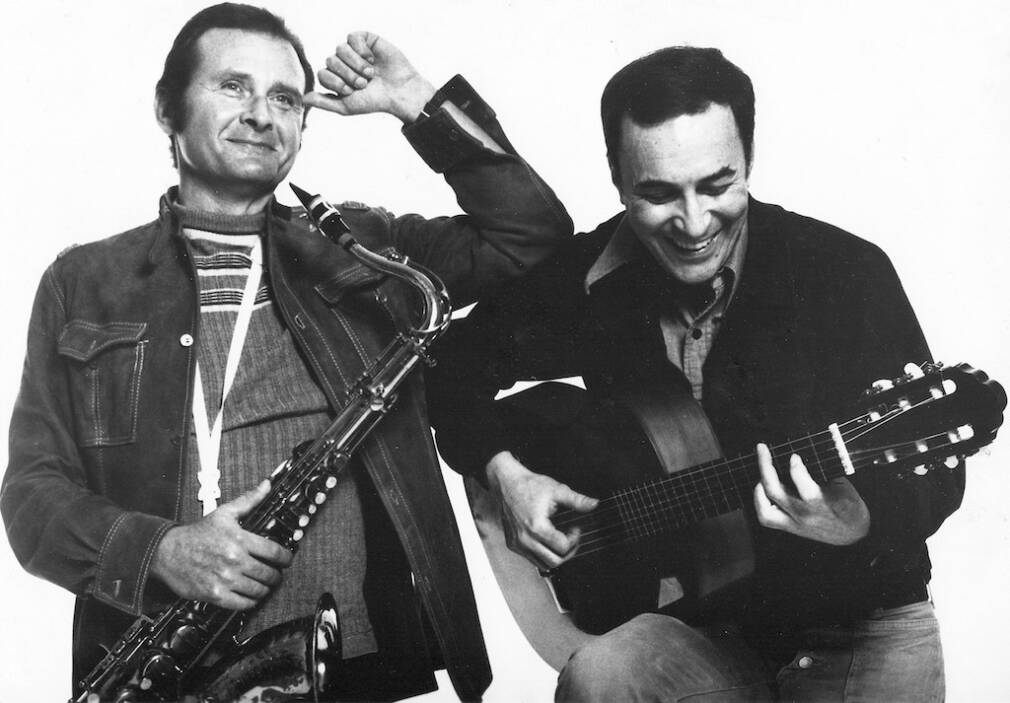 This summer the boss of the Heavenly Sweetness label shares some of the treasures of his record collection with us. Today, let’s dig some gems from the Reunion Island.

The end of summer is coming, but I’m not going to give you the “beach blues” and so we’re going to end on a high note with some jazz records that represent a bit of an in-house specialty and a big part of my vinyl collection. To finish, I received a nice postcard from the jazz cowboy: Laurent Bardainne.

Here is a jazz record that brings those summer vibes! From the very first notes, we are transported to Rio de Janeiro with a dry Schweppes in hand ;-). This vinyl has a special flavour for me because it’s one of the first records I found at a flea market… a long time ago.

I must admit that I was a bit hesitant to include it, partly because it’s a mega jazz standard that most of you will know, but also because American saxophonist Stan Getz could be accused of cultural appropriation with his work on bossa nova. But since bossa is itself a combination of American jazz and Brazilian music, it can be seen as one sibling replying to another. Moreover, Stan Getz surrounded himself with two of the creators of the bossa nova movement: Joao Gilberto and Antonio Carlos Jobim. The genius idea came in the form of a version of “A garota de Ipanema,” sung in English by the sublime Astrud Gilberto, Joao’s wife.

Stan Getz was no stranger to bossa nova, as he had already recorded two albums that I also recommend – Jazz Samba with guitarist Charlie Byrd and Jazz Samba Again with Brazilian guitarist Luiz Bonfa. It’s on this album that you’ll find one of my favourite tracks ever, “Saudade vem Correndo,” a piece cleverly sampled by The Pharcyde for “Runnin’.” Another of my all time classics.

This is a much less known record than Getz / Gilberto but just as good. It also provides an occasion to talk about Latin jazz, which is another of my jazz passions. I could have told you about Dizzy Gillespie, Tito Puente, Ray Barreto or Harlem River Drive, but I might as well offer something a bit different!

There isn’t much information out there on the percussionist Emanuel K. Rahim, except that he changed his name at the beginning of the 70’s like many jazzmen linked to Afrocentrism and spiritual jazz. He used to be Juan Amalbert, a name on which you’ll find much more info as he was one of the founders of the Latin Jazz Quintet, a superb group. I would recommend their collaboration with Pharoah Sanders on the LP Oh Pharoah speak. It even includes a different version of “Spirit of truth.”

An avalanche of percussion, brass solos in all directions and beautiful piano themes … in short all the ingredients of Latin jazz. It sportsith danceable tracks alongside calmer ballads. And as usual, the beautiful cover art makes it even more enjoyable to listen to! Note that this album, which can be found quite easily, was reissued a few years later on the Muse label.

In the first season of this series, I recommended Roy Ayers and the Mizell brothers, so let’s close this summer with some jazz funk, a genre that works wonders in the sunshine!

Tarika Blue is linked to Roy Ayers, for whom the group often opened (as well as for the Mahavishnu Orchestra). We are here for jazz fusion with synthesizers and huge bass lines. The album alternates between soaring tracks and much funkier ones with a beautiful female voice carrying it all. “Dreamflower,” “Love It” and “Truth is the Key” are classics of rare groove. Note the participation of the formidable James Mason on this album, a musician who went on to release his seminal Rhythm of Life on the same label.

Now, you know the score: every week I ask an artist from the label to talk about one of the favourite vinyl pieces from his collection. This week, we’re talking about Jazz, so naturally I asked Laurent Bardainne to contribute … Then I received this strange postcard…

Overlooking the hill, with my feet in the pool of our villa, I am looking through binoculars at some female influencers doing paddle-yoga on the beach. I spill some of my second daiquiri on my white kimono while playing the beginning of Webster’s solo on “Bye Bye! Black Bird” and then the lack of you rips out my guts like a claymore. Franck Descollonges, where are you at this moment? What happened to your satin hair and your bronze muscles? How is your naturist riding course going? Are you even thinking about me?