Rapper Baloji is Back with a Tortured, but Devilishly Creative Album 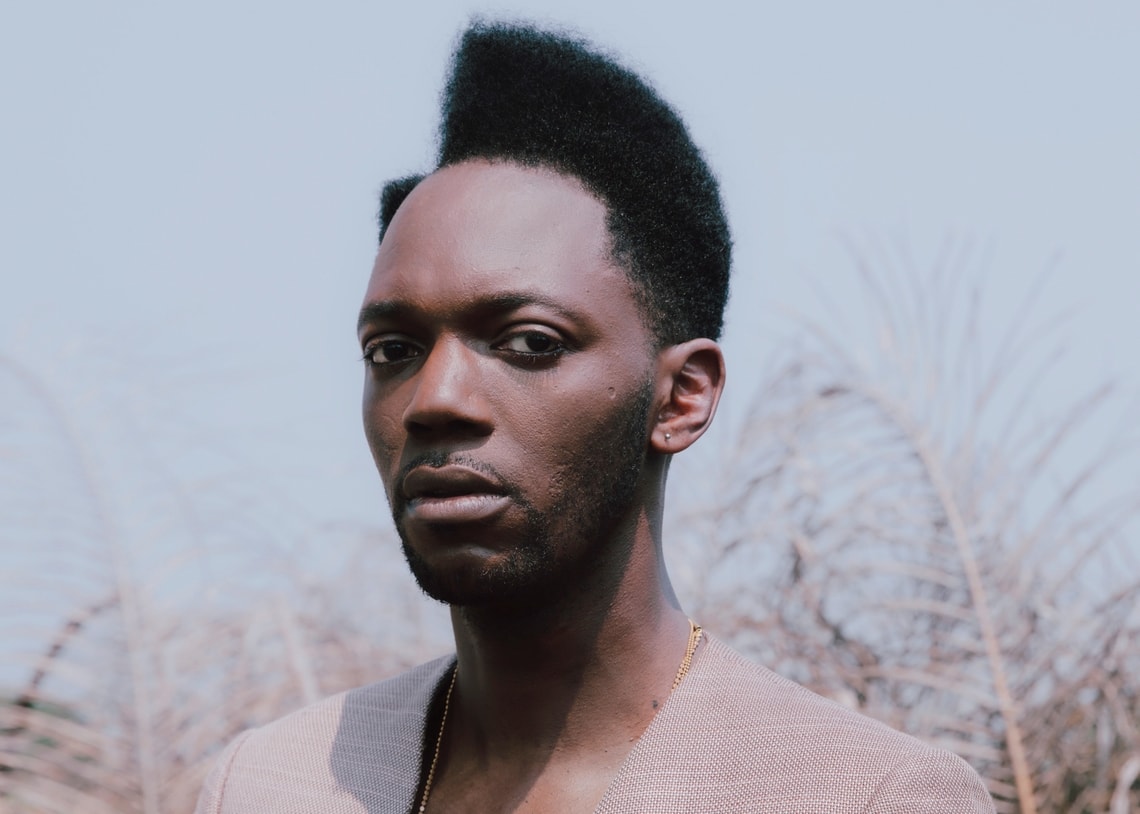 Venture down 137 Avenue Kaniama and you will not come out unscathed. The album title is a nod to the street in Lubumbashi, in the Democratic Republic of Congo, where the Belgian rapper was born just about forty years ago. It is a resolutely hip hop album, in its production as well as in its poetic and political musings, and is coming out as one of spring’s top releases.

As questioned in “La dernière pluie-Inconnue à cette adresse,” (The Last Rain – Unknown at This Address), is the fantastical music of Baloji “too black for the whites and too white for the blacks”?  Regardless, it is definitely hip hop; the mixing of genres makes this evident. From a slow boil to a furious bubbling of sound, Baloji arranges the album with impressive authority. The strings of James Underwood’s violin (Vampire Weekend, The XX) accompany the rumba (“Bipolaire-Les Noirs”), Trap brushes up against Bikutsi (“Ensemble (Wesh)”), and electronic music and Afrobeat alike are called upon to complete the talented artist’s musical flow.

Baloji, who writes his own songs, is above all a poet. He is also a rapper, an amateur sampler, and a talented storyteller. Moreover, he designed 137 Kaniama Avenue as one long take. His 14 tracks, partly autobiographical — or to put it otherwise, his 14 cathartic tracks — are riddled with fake film dialogue as well as real cinematographic references, from Jean-Luc Godard to Michel Gondry.

It’s not surprising, since Baloji is also videographer. For the release of his first album, Hotel Impala, 10 years ago, he made all of his own music videos: “[I did it] rather out of necessity, at first, because there was no one to do them… and then I got caught up in the game. For me, aesthetics is a way to make the subject believable. The image is at the service of the song.” 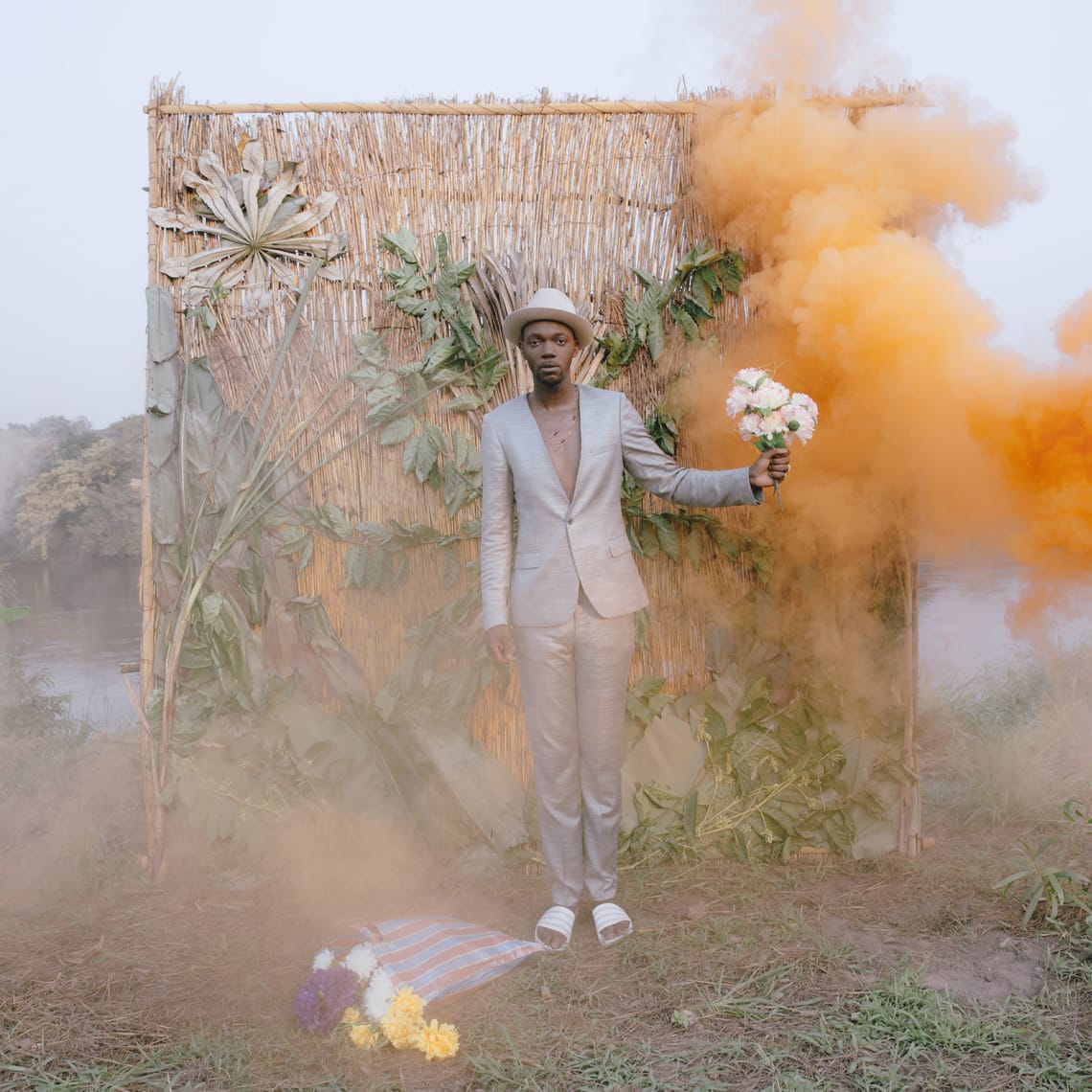 Baloji has just made his first short film, KANIAMA SHOW, to accompany the release of his new album. He hopes to be able to show it in Congo:

“It is a satire of television propaganda in the Congo and more broadly soft power. In our societies, we continue to think that if it’s said on TV, it’s true… I’ve studied a lot of TV shows and the set I created for the film is a mix of Michel Drucker’s, of Rai Uno’s Sunday afternoon set and of Soul Train.”

“Soleil de Volt” reprises, in its own way, “Dooyo,” a song by the Dur Dur Band, a Somali group from the 80s. Baloji states that behind the “groove assassin” sound hides the reality of the Lubumbashi inhabitants “living in provincial towns with alternating current and palliative care.”

This  “Overseas Congolese” as he likes to define himself, especially on “Hiver Indien” (“Indian Winter”), which is by the way the soundtrack of the video game FIFA 18, continues to take a critical look at the country’s affairs and even, more widely, at the current state of the African continent. The masterful final title “Tanganyika,” is a testament to his critical positioning.

“Tanganyika” reveals the voice of counter-tenor Serge Katudji as well as a choir set up around bassist and choirmaster, Didier Likeng. A veritable requiem, this 11 minute track covers the dramatic situation in this southeastern province of the DRC. Accompanied by UN soldiers, Baloji and his orchestra performed in the city of Goma, a region which has suffered the most violence. Speaking about the performance, Baloji has said to have left his heart there.

“Tropisme – Start-up” is, according to Baloji, a true account of African affairs, with Afrobeat flavor. He credits Antibalas, a group from Brooklyn inspired by Fela Kuti, with influencing the track: “This is one of the tracks I prefer. It was inspired by the situation in southern Sudan and how we see these issues in other countries, in northern Cameroon for example, or in my region, Katanga, with its separatist aspiration. It’s just like what is happening with the Catalans or the Belgians.” 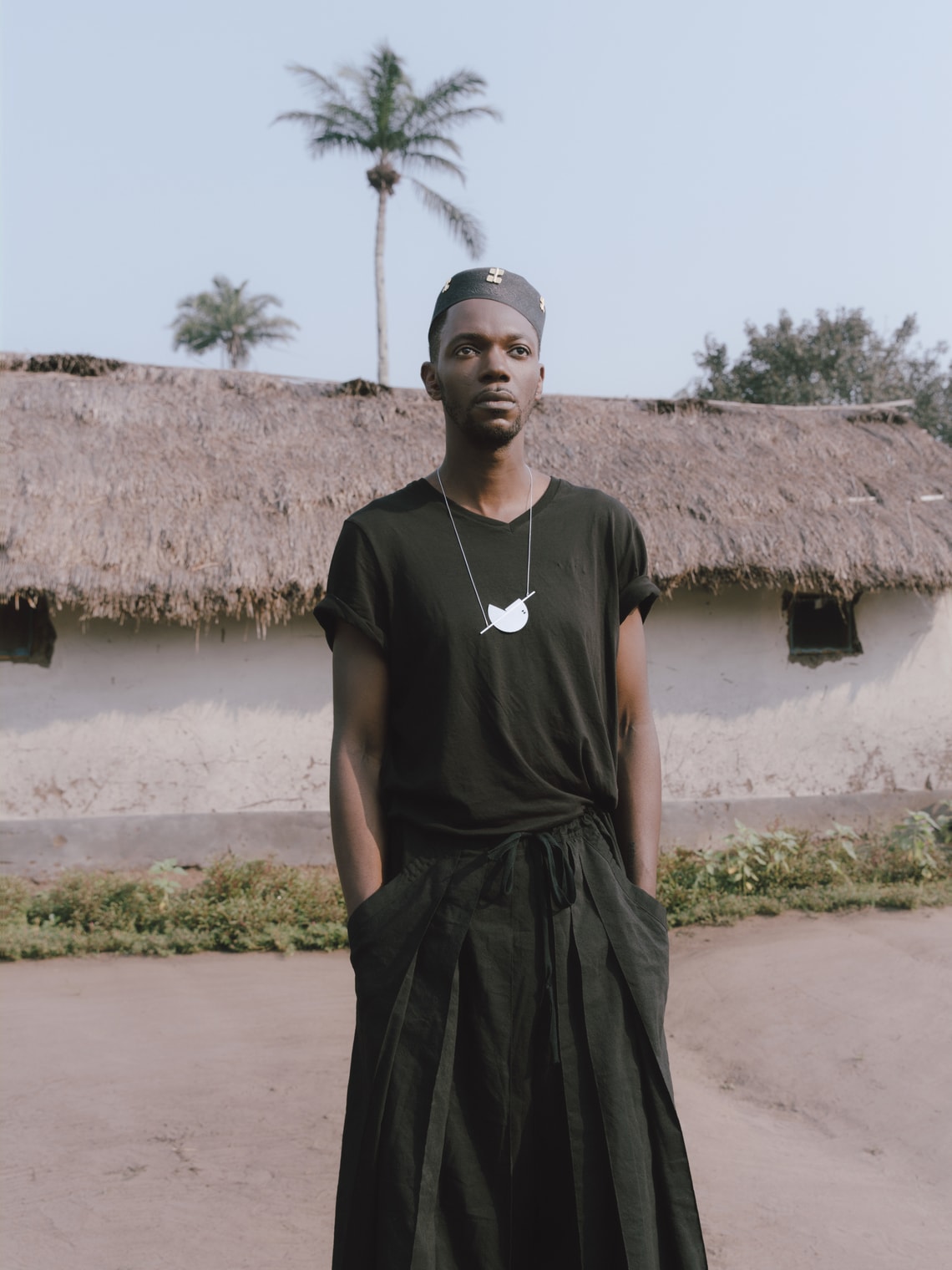 In this multi-lingual album (with lyrics in English, French, Lingala and Swahili), there is also a tendency to mix styles and moods, and the references to Fela Kuti are not lacking. They even set the tone, from the get-go, with “Glossine (Zombie)”. On this title, the father of Afrobeat targets the military who blindly obey orders. Baloji points to the resignation of his contemporaries:

Baloji, who does not understand this “attitude of submission,” calls upon La Boétie, to drive home his point: “Voluntary servitude, you sleep with your eyes open”. These words are asserted by a choice narrator, Congolese author Jean Bofane, who appears throughout the album.

On the title “Bipolaire – Les Noirs, » (Bipolar – The Blacks), Baloji, with his deep voice, appropriates the title of Haitian writer Danny Lafferière’s book and questions: “How to make love to a negro without getting tired?” His response: “You need to conquer him, you need to immobilize him.”

Baloji dedicates this track to Universal Africa, the label on which he first released his last EP in 2015, 64bits & malachite. He addresses his ex-boss, Vincent Bolloré, in a statement reminiscent of a bitter divorce: “Because we’re eating out on your expense account, you think I’m at your service.”  (Baloji is now signed with Bella Union.) 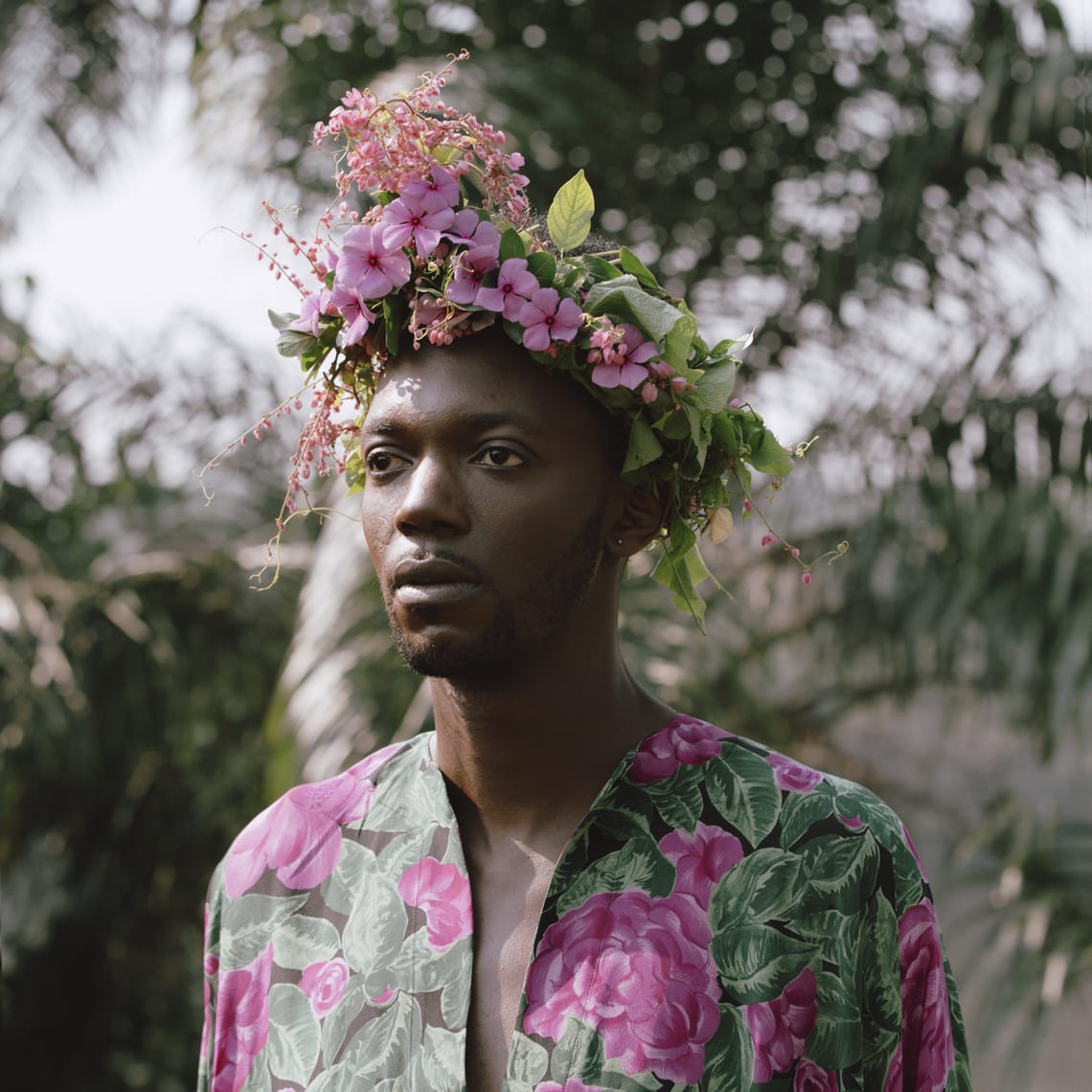 Following this anti-love letter is “Passat and Bovary” —  a comic song and tribute to one of his self-proclaimed ultimate musical references, Jacques Brel. Speaking to a modern version of Flaubert’s character, the “faithful lady despite her wavering heart,” he speaks of his experience: “I fell in love with a woman who was already engaged. At the time, I drove an old, ghetto Passat!”

Adultery, heartbreak, and failed romantic relationships are at the heart of the new project by the man who “brings a pen to the wound,” who speaks to difficult, painful situations. (See track “Ciel d’encre”)

“Love and relationships are central to the record. This sequence starts with the song “Ciel d’encre” (translation: Ink-Black Sky)  where I discuss the separation with the mother of my daughter and all that it implies, including the way of losing yourself in something carnal… I speak about that in the following track “Peau De Chagrin-Bleu de Nuit” (translation: The Magic Skin – Blue of the Night).

Baloji was inspired by the title “I Belong to You,” by Lenny Kravitz, an artist who he came to appreciate for the latter’s alternative, underground style.  The lyrics that speak to carnal love also evoke the climactic moment that is called, in French, “la petite mort” (Editor’s note: the translation is “little death” and is a popular reference for sexual orgasm, as likened to death). “I had a lot of fun writing this text. No pun intended, but it was pretty pleasurable! This track speaks to a post-coital melancholy, to the feeling of vulnerability that we rarely talk about because it makes everyone feel uncomfortable.”

Baloji really bares it all on this new album. The climax comes with “La dernière pluie-Inconnu à cette adresse” (The Last Rain-Unknown at this Address) that echoes “Entre les lignes” (Between the Lines) from his debut album. It summarizes the trials and tribulations of a life defined by separations and restless wanderings. It’s a shocking piece, both for its painful lucidity and its furious combativeness:

In this same song, which Baloji brands as one of his most honest, he announces that it’s his last album:

According to him, the economic model is not viable, particularly because of the importance he attaches to the image: “For me, it is a real extension of the music. But we live in a world where people do not understand that. I love the expression of American singer Azealia Banks, ‘broke with expensive taste.’ I think that defines me pretty well!”

Crossing our fingers that a successful release of this gem of an album will change Baloji’s mind, because, as he said while quoting French philosopher Henri Bergson, “The future is not what happens but what we are going to do.”

From March 24th onward, Baloji, who won the “Best Concert” award last January at the RTBF D6Bels Music Awards (Belgian awards ceremony), will be travelling the globe, from Japan to Germany, passing through France. Baloji is at Les Etoiles in Paris, March 30th, and at Metronum in Toulouse, April 4th. 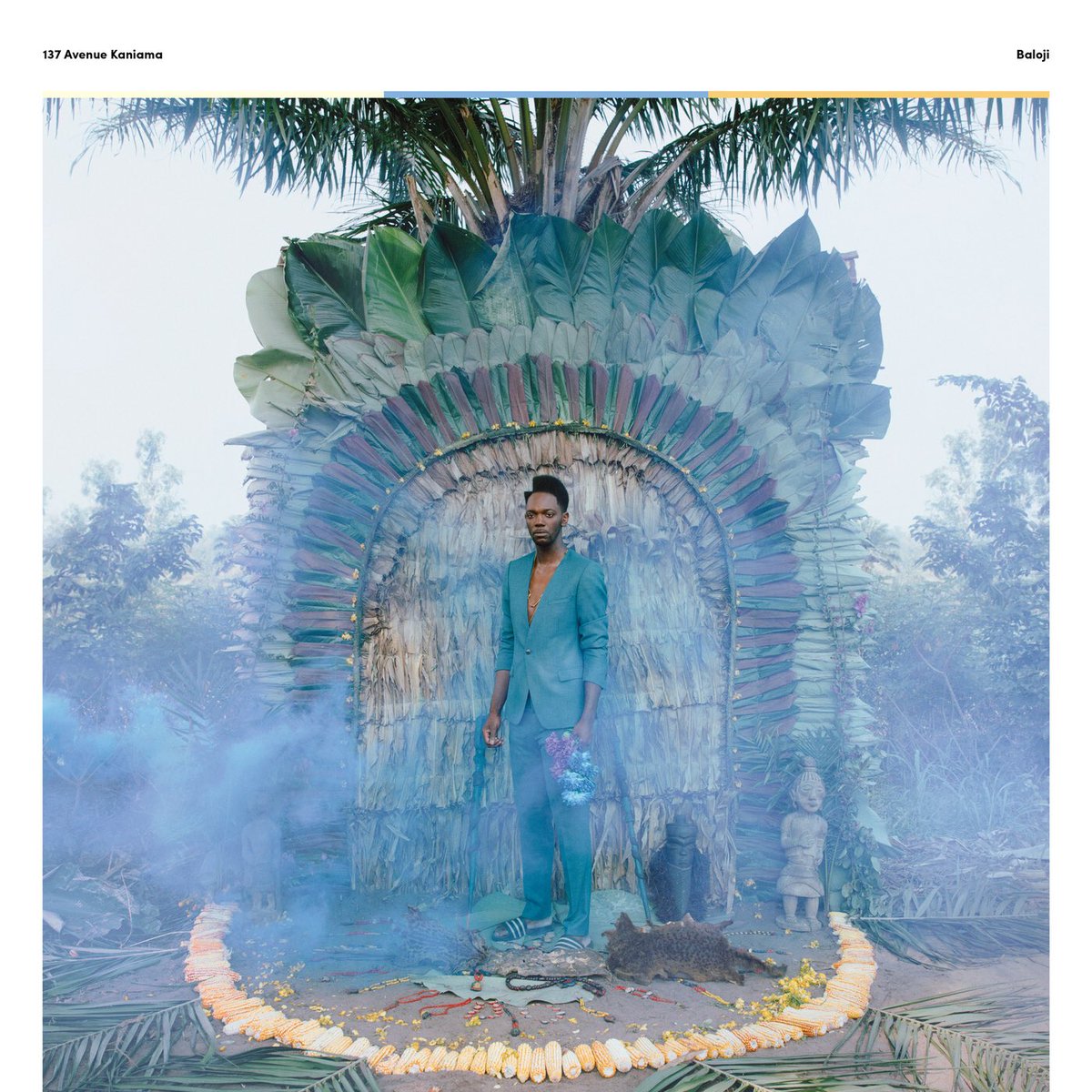