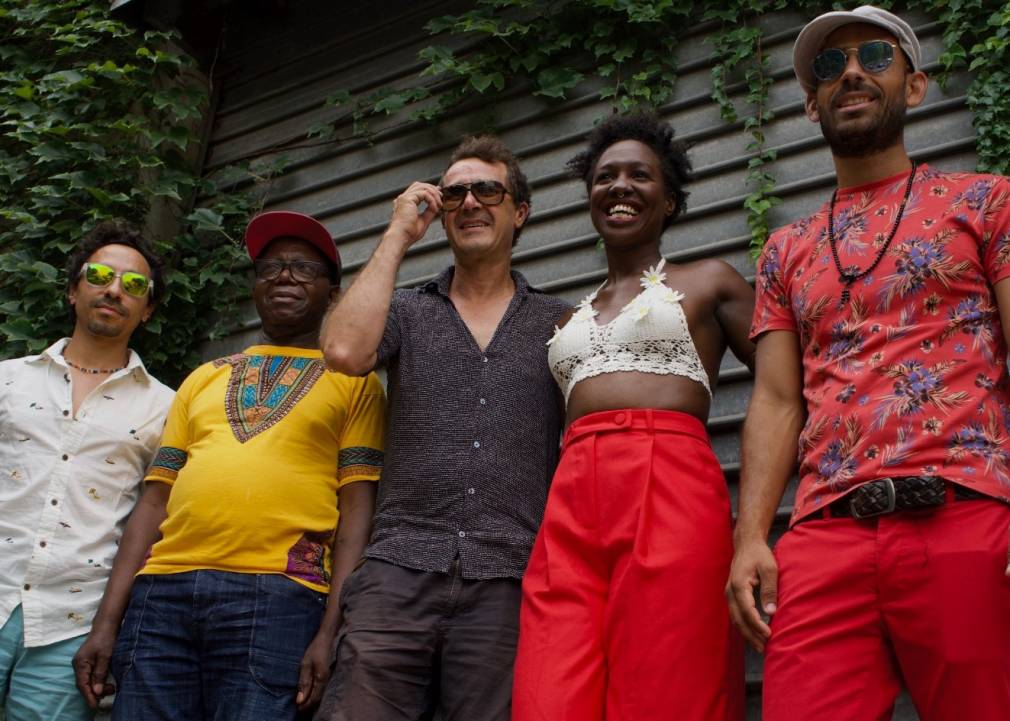 Between Colombia and Central Africa, this mix of frenzied percussion, Afro-Colombian songs and “Cameroonian style” electric guitars  mark an energizing album whose central aim is to make us dance: ¡Bailalo Duro!

With their first track from the album, “Paisano,” accompanied by the Malian singer Mamani Keita, Nkumba System expresses their ambition to link Africa to the Caribbean. This  Marseille-based group features Colombian, Cameroonian and Cuban musicians with Guillo Cros (guitar, lutes), Cindy Pooch (vocals), Jhon Socha (bass, lutes), Simba Daniel Evousa (guitar) and Yoandy San Martín (drums, lutes). As they embark on their record, the Cameroonian makossa crosses paths with the Colombian cumbia, Zairean rumba rubs shoulders with the Marimba currulao, which melts into the blues of the Malian desert.

This impressive rhythmic patchwork was first weaved during the travels of Guillo Cros, a founding member of the group, who met the Cameroonian singer Mama Ohandja, with whom he trained for several years. He then resided in Bogotá from 2014 to 2019, where he collaborated with Pedro Ojeda in the group Romperayo and Los Propios Bateros, among others. His project of founding the group Nkumba System was born in 2018, in the turmoil of the Colombian tropical scene. Several singles were released with local labels Tambora Records and Palenque Records, before the Cameroonian guitarist Simba Daniel Evousa joined the group. This first album is a deep reflection on what might constitute the invisible linkages betweenAfrican and Colombian music. The group proposes a possible interpretation: generosity, dance, key signatures and trance.

¡Bailalo Duro! will be released on November 13 via Prado Records.

Listen to Nkumba System in our playlist Songs of the Week on Spotify and Deezer.