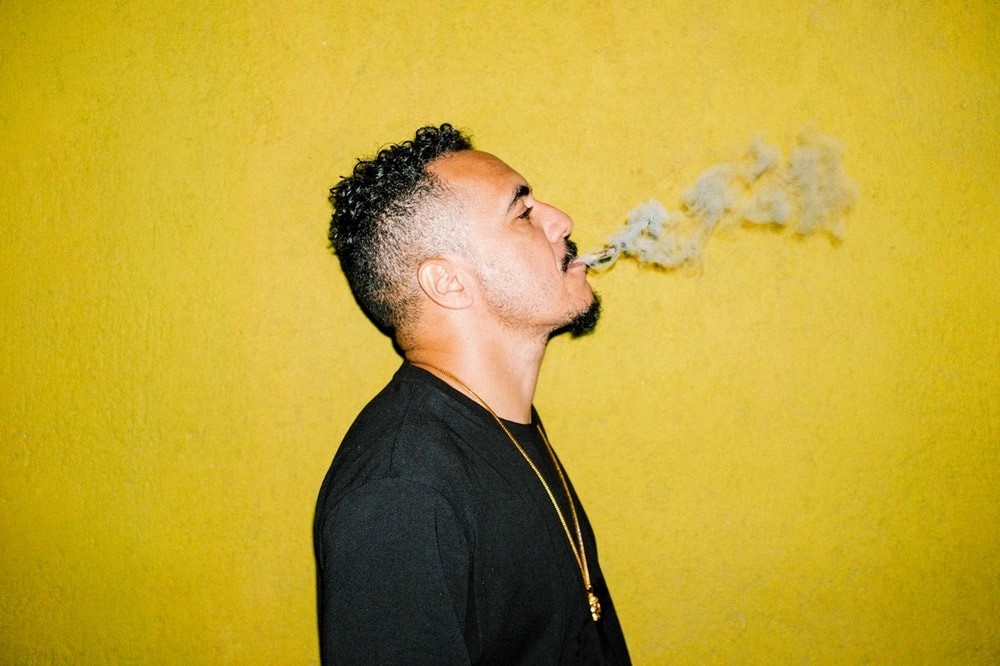 The pioneer of Rio de Janeiro’s rap scene is now over 50 years old. Internationally-acclaimed Marcelo D2 however is still not tired of exploring Brazil’s rich musical heritage. His latest album, Samba Drive, draws inspiration from the bossa-jazz trios of the 1960s.

Marcelo D2 [pronounced “Marselo Dee-Doish”], one of Brazilian rap’s most famously known, is known to his family as Marcelo Maldonado Gomes Peixoto. He was born on 5 November, 1967, which was a fruitful year for Brazilian music with the flourishing of modern Brazilian Popular Music [“MPB” for “Música Popular Brasileira”] – Caetano Veloso, João Bosco, Chico Buarque, Gal Costa, Gilberto Gil, to name a few all fall under the MPB umbrella. “1967”  – a track title from D2’s debut album, Eu Tiro É Onda, was released in 1998 and mixed in New York and Los Angeles by Carlos Bess and Mário Caldato Jr. Eu Tiro É Onda paved the way for his international career and a new public recognition. Twenty years on, we meet with Marcelo as he performed at New Morning, inviting the incredible Haitian saxophonist Jowee “Bash» Omicil. D2’s command of the English language is not entirely perfect and his larynx was evidently put to test during a recent European tour, turning his voice even huskier than usual. He chooses to treat himself with a Porto wine, a souvenir brought in Portugal whilst recently visiting for a concert. Saúde! (Cheers!).

“I’ve been rapping for 24 years”, he says with a weary face, re-counting the days: “I’ve changed since I started, but you know what? I’m still always looking for the perfect beat! (1) I think the process is more important than finding the beat itself. I’m endlessly searching.”

From punk to rap

Marcelo was born in a favela, yet never used any of the pessimistic clichés of “ghetto rap”: “I was born in the Lapa neighborhood, which is home to a strong artistic community, and a buzzing nightlife scene. The funny thing is that when I started making music with Planet Hemp at the beginning of the ‘90s, there were no rappers in Rio. I come from Brazil’s second generation of Brazilian rap, but Rio’s first one. The first generation – at the end of the ‘80s – came from São Paulo. O Rappa was founded in 1993 in Rio and comes from the same scene I mixed with, alongside Chico Science and Nação Zumbi.” (3)

Contrary to what seems to be apparent, D2’s first musical love is not rap, but hardcore punk, with its mosh pits and distorted guitar amps. Planet Hemp, his debut band, was playing a deconstructed version of rock music: “I was skating at the time and listening to Dead Kennedys! The first rap group that caught my attention was Afrika Bambaataa. They literally blew my mind. It changed my life. As Rio was an extremely violent city, I had things to express about the situation in my city, about politics, about street life. I felt rap was the best vehicle to do this.” Marcelo considers both sides of Rio – an ambivalent Janus he holds dearly: the violent city in “Desafabo”, featured on the album A Arte Do Barulho (2008); and on the other hand an endearing place as described in “Rio Puro Suco”, from the album Nada Me Pode Parar.

Searching for the lost sambas

In 2003, Marcelo D2 produced À Procura Da Batida Perfeita, which became a huge success in Brazil, with Marcelo changing his direction and creating samba-rap, now his signature trademark. The video for “A Maldição Do Samba” (“The curse of samba”), resembles a candomblé ceremony, typical of the Afro-Brazilian religion that invokes the orixás and casts human beings into trance. The track is built around a sample of the 1973 classic Marku Ribas track, “Zamba Bem”: “When you start playing music, it’s rather natural that you try and imitate others. But I’ve always tried to do something original. I felt that samba was a good place to explore. To me, samba is a direct way of communicating with my people. It’s an entwined link. And at the same time, the whole world can also acknowledge what I’m doing and what influences me.”

A truly passionate digger, D2 sampled many classic tracks written by Tom Jobim, Marku Ribas, Copa 7, Luiz Bonfá, Milton Nascimento, Ivan Lins and Raul Seixas, amongst others: “In classic rap you have the kick, the snare and the funk cymbal. I’ve replaced the latter with a samba cymbal that sounds like “tchica-tchica”. That was the first step. When I was digging for old records, I would always listen to the b-sides – the track that nobody listens to anymore.” On his journey back to the roots, Marcelo D2 shared the stage and recorded with the big names of carioca [for “Rio de Janeiro”]: jazz pianist João Donato in 2008 for a classic show on Acústico MTV; Sergio Mendes on his 2006 album Timeless; and his long-time friend Seu Jorge for the duet on “Pode Acreditar”.

From the US to Africa

D2 made several trips to the US where the sounds of the Native Tongue left a strong mark on him: A Tribe Called Quest, De La Soul and The Jungle Brothers. He‘s established strong ties with North-American artists, especially with will.i.am, who is featured on the 2003 track “Sangue Bom”: “The guy loves Brazilian music, and he took the opportunity to try work his flow with mine”, explains Marcelo D2. “The first time we worked together was in Los Angeles, long before the release of Elephunk, the album that made his band, The Black Eyed Peas, famous. Will.i.am is a mad genius! He would joke with me and say, “my car is broken; we have to push it!”. In 2013, Marcelo D2 invited another L.A.-based friend, Aloe Blacc, to sing on “Danger Zone”, which featured on the album Nada Pode Me Parar. “When I think of a singer, Aloe Blacc is the first name that comes to my mind. He’s a great rapper, too.” You can also hear Queens-based African-American rapper Joya Bravo on “Feeling Good”. Without a doubt, D2 is aware and in touch with the globalization of music.

The rapper also managed to forge links with Africa, a continent that brought a lot to samba music. In 2013 he performed in Luanda, Angola where he shot the video for “Você Diz Que O Amor Não Dói”: “I met with local rappers. It surprised me as there is both beauty and poverty there, as there was in Brazil 50 years ago.” The following year, he did a feature with Ghanaian-New-Yorker Blitz The Ambassador on “All Around The World”, excerpted from the album Afropolitan Dreams. “I hope I can explore this path further and work with more African artists.” Watch this space…

One of his finest tracks, “Eu Tenho O Poder” (literally, “I have the power”), Marcelo D2 addresses the issue of political power. The song echoes deeply of a torn apart country, especially since it’s seizure of power by the strongly conservative Michel Temer in August 2016 – a process the leftist parties considered a “constitutional coup” (the “golpe”). The end of the video includes footage of an alter-globalist and anti-capitalist demonstration: “I rap in the tradition of committed rappers like Chuck D and KRS One. I write about political problems because I think we have to change the situation. There’s corruption all over the place and the people are suffering.”

Taking it back to the roots of Brazilian music

As a regular collaborator with the younger generation of Brazilian rappers – such as Akira Presidente on the track “Faz” – suggests that contemporary hip-hop is still on the right path: “Maybe rap is going through its biggest phase. I’m traveling the whole world, from Moscow to Luanda… and it’s vivid everywhere!” And next? The Rio-based rapper is preparing his 10th album, for which he invites Gilberto Gil and Marisa Monte to feature: “It has a strong visual aesthetic, this is important and special to me because it is almost like an autobiographical album. I’m working hard on it!” He also says that he’d like to “dig deeper into Brazilian music. Not only to sample records, but also to get to the root and to utilise drumming percussion – the macumba and the atabaque [African instruments, the equivalent of the Yorubas’ batá drum used in Brazil’s Nordeste region’s candomblé and capoeira traditions; author’s note] – plus a beat and horns.” We can’t wait to hear it! Chega, Marcelo! (“Come on, Marcelo!”).

(2) Founded in Recife, in the region of Pernambuco, the band made themselves famous in Rio de Janeiro. They mix rock and maracatu. Maracatu is a Brazilian ritual invented by the slaves in the Nordeste region, as a tribute to the king of Kongo.