Chassol: having big fun putting the world to music 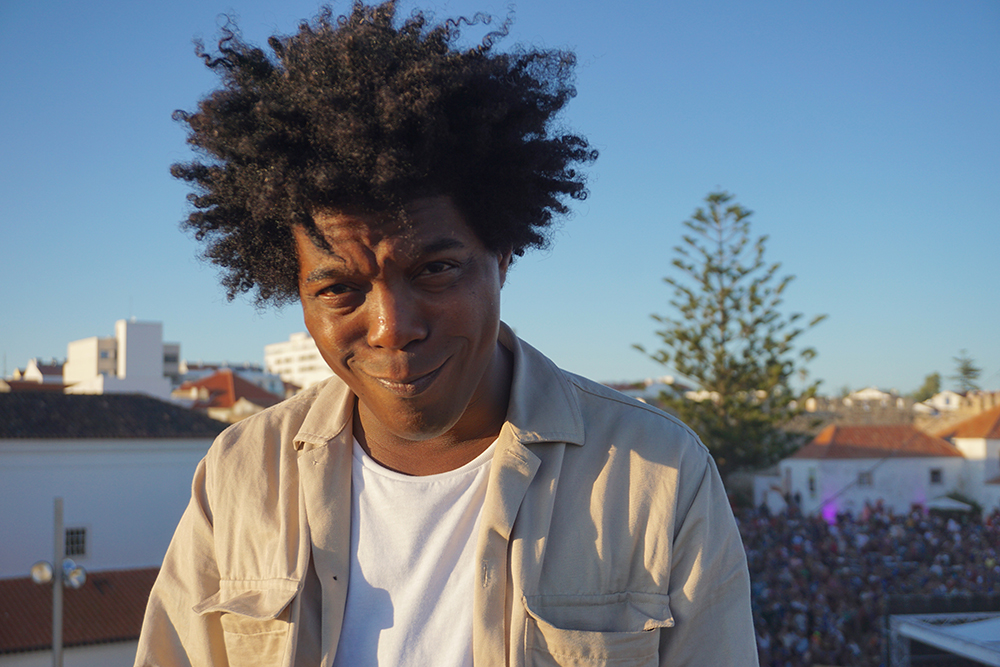 Videographer and composer, Chassol is the author of the radiant Big Sun, an album that synchronizes pop, jazz and free music onto images shot in the Caribbean – specifically Martinique. The multidisciplinary artist harmonizes reality to exalt the implicit that lies within it. “The Sun is the closest element which humans can relate to. And without Sun, there would be no birdsongs.”

It’s only a few moments after a late July sunset on the bay of Sines, Portugal, that the pianist and his drummer took the stage of Festival Músicas do Mundo (read our report for the 2017 edition) inviting the audience to a nonstop audio-visual voyage.

What is your initial and foremost language: sound or images?

Sound. I was born in 1976, so I am part of the TV generation, and a regular viewer of Tuesday night screenings at the theater. At 14, I knew I wanted to compose musical scores, particularly because of their format and duration being undefined. When I listened to soundtracks, I’d be surprised by the duration of the songs: they depend upon the rhythm of the scene, which could be 7-minutes long, 1 minute, 30 seconds… Far from the 3’30” pop format. So I’d say sound came first, to then be placed onto images.

Are there any particular soundtracks that have influenced your work?

I’m very much into West Side Story: the extreme and precise synchronisation between sound and image. When someone raises an arm, you can hear a glissando of violins perfectly executed at the same time, and this is very satisfying to me. I’m not very good at improvising, thus I’ve developed other methods.

What was your first musical instrument?

The piano. As a music teacher, my father was very strict with me. He would bring me to his band’s rehearsals, and I would have to write down the score of the arrangements he played.

Did that “rational” strictness give you the opportunity to find the sensible and human elements inside the sounds of the world around you? In an interview you gave to a Spanish media, you said – I translate and quote: “I’m trying to discover the secret language of life.”

Did I really say that? I don’t think they understood me! I don’t believe there’s any “secret language” of life.

I felt there was some truth in this expression. When I watched the video of the flutist in the cemetery in Martinique – he’s performing his own free rendition of Eugène Mona’s “Ti Milo”, if I’m not mistaken – it seemed to me that the way you accompany him with the piano is a way to follow the off-screen path he’s offering. You seem to be looking for another language than the one of “a flute on-screen and a piano on a stage”.

Yes indeed, he’s covering “Ti Milo”, well spotted! I filmed this musician in Martinique and as I got back home, I was dying to go into my studio in Paris so I could play on top of this video. And it’s the first thing I did with the pictures from this trip. I played this video, sat at the piano, and it’s that very first take that I eventually arranged, despite its few minor mistakes.

Could we say then that your approach is more “sensitive” than “conceptual”? In the way that you’ve sought out the pure emotions in the video, rather than trying to compose the “best” musical arrangement possible. Am I right?

I’m not sure. What you call “concept” and “pure emotion” cross paths, I think. One can be at the same time in the concept / reflection and in the action; both with spontaneity and in conceptualization. To explain further, I’d say that the concept belongs to the analytic world, whereas spontaneity belongs to the synthetic one. However, analysis does not exclude spontaneity. For example, if I sing to you the notes of a C major chord for educational purposes – [he sings] “C, E, G” – it does not remove the magic of the melody that these three notes compose – [he sings] “C, E, G”. Here you have the analytic and the synthetic. If you take concrete music – the music of life – it’s only about unveiling what is already here. As a musician, I take time to observe and analyze these things and say, “this place is very beautiful”. Then I just add a few chords to it. My work is primarily based around music: what happens when you switch from this chord to that one? And no matter where I am: everything in nature is beautiful and interesting, and I place everything at the same level.

It seems to me nevertheless that the choice of subjects and places you film are far from just objectively beautiful, as they often have something to do with your personal history, and a collective social history too: Martinique and New-Orleans, both part of the slave trade route, as well as through India, a colonized land.

Yes, that is me and my life’s story. And I find these places very stylish. But that’s not what matters, it’s about life, in general.

So you would rather be a channel of communication between what you observe, and the people who listen to / observe your art?

Maybe, but I wanna be loved, too! [Laughs]

Your work reminds me of Hermeto Pascoal’s, the Brazilian composer and multi-instrumentalist, for two reasons: firstly because he has done projects on harmonization too – with former President Collor de Melo’s speech in 1992 –; also because he’s already composed and performed “the music of nature” – such as the Sinfonia do Alto Ribeira performed in a lake and inside of a cavern, filmed for Brazilian television in 1985. When choosing locations, is there a certain atmosphere that you’re looking for?

Harmonization, [Béla] Bartók had done before him, too [in the early 1900s]. As for music in nature, I think that Hermeto Pascoal was doing this with humor. He even had musicians use pigs as instruments, squeezing them between their arms. He decided to play inside the water because it’s both funny and spiritual. Through humor, you’re including people and you’re sharing with them. What makes us laugh is what unites us the most.

Of all the contemporary audio-visual works and pieces that experiment with sound and image – from traditional cinema to the 1970s New York Cinema of Transgression, what has inspired you the most?

The first thing that comes to mind is The Clock, by Christian Marclay [a video installation first presented in 2010], which was awarded the Golden Lion at 2011 Venice Biennial. It’s a 24-hour video made of extracts from movies that all indicate the time, and this corresponds to the exact time you’re experiencing the installation. I saw it at the Centre Pompidou, Paris. At first, I thought, “yet another artist video piece…”. But then when I understood this would really last for 24 hours, I let myself go. This was pure pop culture. A game of synchronization.

And in traditional cinema?

I have a thing for horror movies. Among the most recent ones, I’d say The Descent [2005, UK]; and as for the classics, all the movies of Ennio Morricone & Sergio Leone.

Would you say you praise the slowness of movies? Or the contemplation?

You really think that time goes by slowly in the Morricone & Leone movies? To me, it’s like minimal music: time is both fast (the rhythm) and slow (the duration). You can have high tempo music looped in a pattern for 10 minutes.

Not only. Minimal music, yes, but also Miles Davis, Ennio Morricone, [Igor] Stravinsky and Jerry Goldsmith for movie soundtracks ; [Maurice] Ravel and [Claude] Debussy because I’m French ; American composers [Aaron] Copeland and [George] Gershwin… and as for my contemporary peers, Kendrick Lamar, among others.

What do you find interesting in Kendrick Lamar’s work?

He’s managed to translate the history of Afro-Americans by producing a very contemporary music – including trap – as well as jazz styles, in a very cool combination. That’s amazing!

You say you admire Kendrick Lamar, an artist who promotes his African origins. As a French-born person of Martinique ancestry (through your parents), what do you feel you promote and what do you want to communicate?

I read Franz Fanon when I was 15, then Aimé Césaire, so I’m quite familiar with these ideas. My father always told us we were rootless people. When I perform, I always check out how many Black people are in the audience. Today [at Sines’ Festival Músicas do Mundo], I didn’t see any, but I don’t care. And it’s Franz Fanon who taught me that: I am Black, but I am not proud to be Black. Back in the day, everyone was like, “Black is Beautiful”, it was “Black Power” everywhere… because they felt the need to claim their identity. Personally, as I’ve had an easy bourgeois life so far, I don’t feel the need to be proud of being black. That said, I made a movie about the Caribbean, in order to fight against some of the clichés: zouk music, constant partying, Banania [a chocolate powder brand that uses a typical Black person as the main character for the advertisement]. We filmed people dressed up as monkeys during the Carnival there, and this was not fortuitous: this happened when [our Black female Minister of Justice] Christiane Taubira was insulted by far-right movements and compared to a “female monkey”. To me, as a Black person, it’s even funny, because essentially these are just retarded and stupid people. What the monkeys meant was that, “We, Black people, come from monkeys”.

It is indeed that the goal of Carnival aims to turn society’s perception upside down as far as social roles and power hierarchies are concerned. It’s a subtle and fun social criticism inserted into a moment of celebration. In the same way, it seems to me that your work tries to turn our expectations upside down. Would you say you are a subtle activist, neither radical/extreme, or confrontational?

Exactly! I might well agree with the leftist anarchist ideologies, however I’ve never participated to a demonstration. My activism is to be found in the precision of my work. 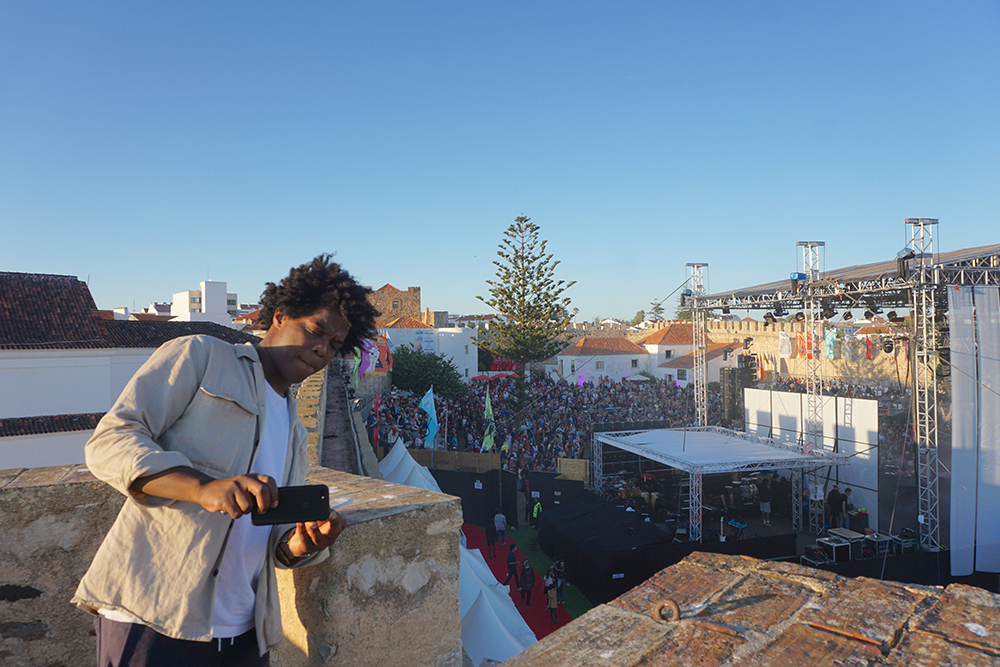