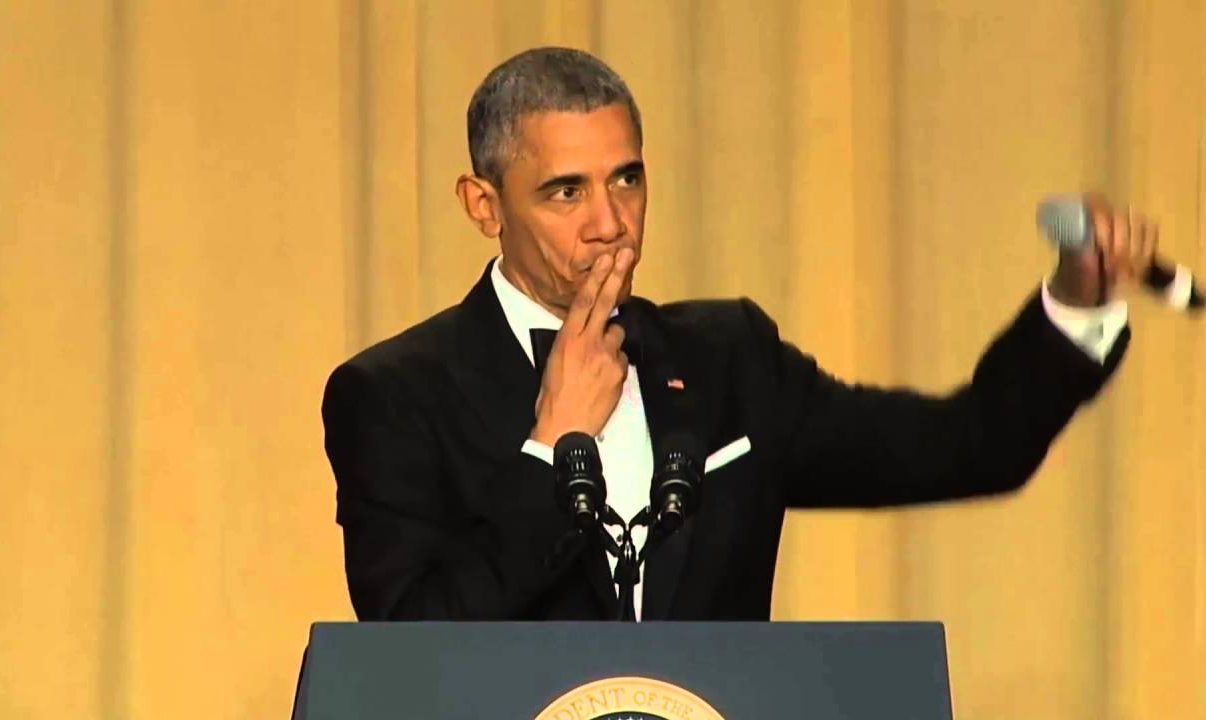 As outgoing president Barack Obama is leaving power and his microphone, we’re looking at the most musical presidency in the history of the USA, which let Black music enter the White House.

A Black president in the White House? Such a situation had only been contemplated in music through fanciful songs that insisted on the non-existent probability of the scenario to happen.

Blowfly was “The First Black President” in 1988

Barack Obama may have a Kenyan father, a Kansas-born mother, he may have grown up between Hawaii and Indonesia, he’ll still be remembered as the first Black president of the United States of America in history.

“In fact he’s half-White / So even in a racist mind he’s half right” sang ironically Jay Z, one of the most visible supporters in Obama’s eclectic musical galaxy. The President has spent his two mandates educating his fans through regular presidential playlists.

He also organized special shows at the White House, during which he himself sang, too. His music selection has showed a strong taste for soul music – Stevie Wonder, Aretha Franklin – but there was even more: in only 8 years, Barack Obama became the American president who invited the most artists (Mavis Staples, Bob Dylan, Kendrick Lamar, Common, Smokey Robinson, Paul McCartney, Mick Jagger, Esperanza Spalding, Queen Latifah, etc.) and the first one to largely approve and open the institution doors to hip hop, Motown sound, and the African-American Civil Rights Movement soundtrack. 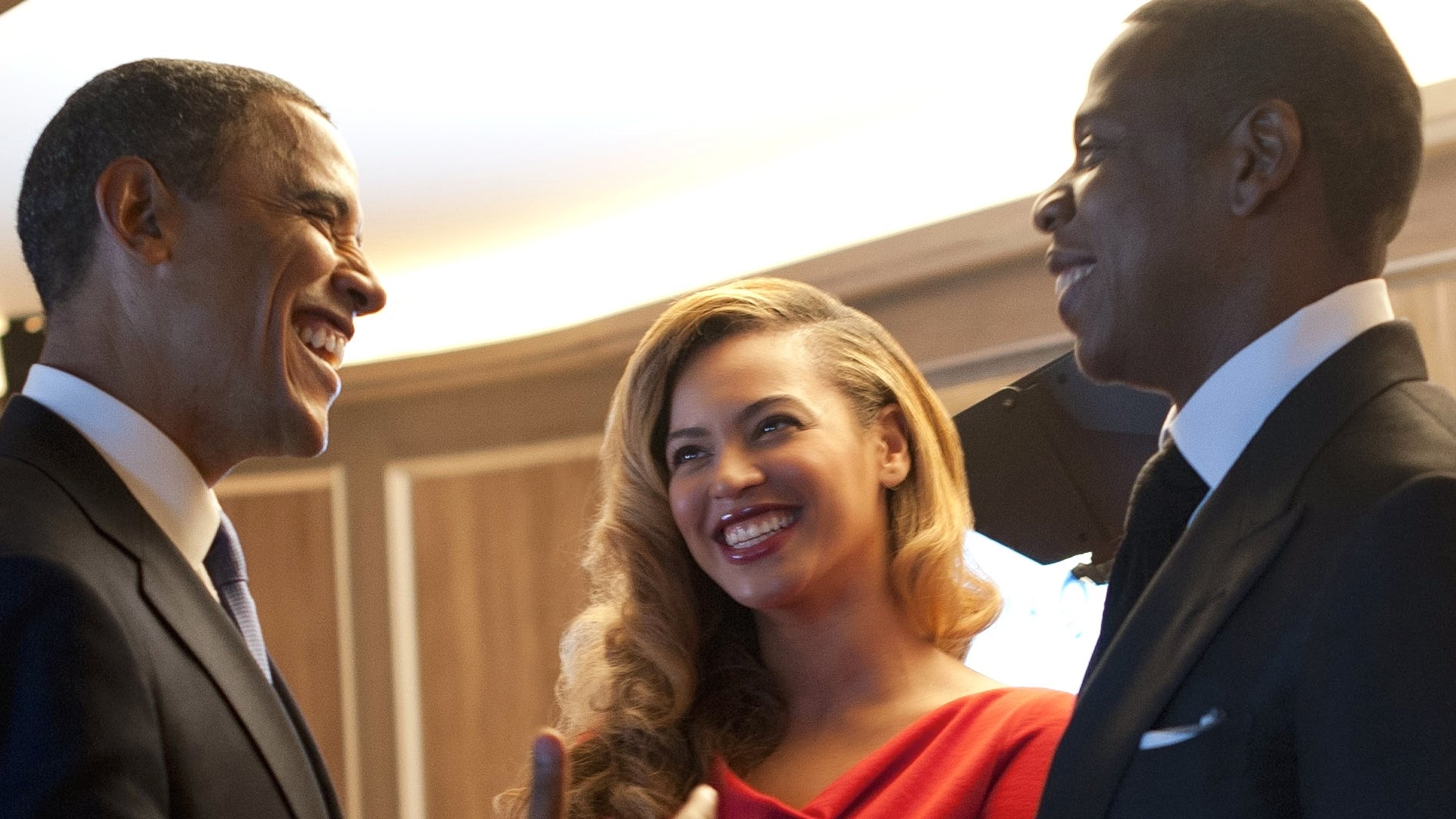 In a country where fame is the ultimate step of social identity, Obama gathered the support of a few stars even his daughters approved (besides the obvious Beyoncé or Jay Z) and he opened his door to a whole new generation of artists. No wonder that the POTUS [POTUS stands for President of The United States, Obama’s username on Spotify and Twitter] farewell party attracted such a crowd of musicians, who patiently queued in the cold outdoors to eventually get into The People’s House, run by the Obama for only a few more days.

At the beginning of January, one could spot at the White House artists as various as Jill Scott, Janelle Monaé, Common, Usher, Les Roots, De La Soul and even new Broadway musical star Leslie Odom Jr., whose Hamilton show has delighted the mainstream audiences. This hip hop and R’n’B show sees the actor and singer (re-)enact US history with the help of a multiethnic cast.

THIS ANECDOTE REVEALS ONE OF THE GREATEST QUALITIES OF SUCH A MUSIC LOVER AS OBAMA, AND HIS TEAM OF ADVISORS AND COUNSELORS: HE HIMSELF EMBODIED THE “COOL” SIDE OF AN ERA THAT WILL END WITH THE ARRIVAL OF HIS SUCCESSOR.

Hamilton had such a large appeal that even Donald Trump‘s future vice-president Mike Pence went to see the show, a rather special attendee who was greeted by the reading of a letter written by the actors themselves, worried about the future of multiculturalism in their country. Long before the performance’s success, Obama had already invited its author, Lin-Manuel Miranda, to participate in one of the White House’s poetic jams.

Since then, the play has toured the whole USA (and will probably be adapted in other countries), has already generated billions of dollars, its author was awarded the Pulitzer prize, and Obama invited him again this year to perform the musical show at home.

“When I first received Lin home, he told me about a project featuring a character that represents the essence of hip hop: Alexander Hamilton, born in 1757!”, Obama was joking when introducing the off-site show at the White House.

This anecdote reveals one of the greatest qualities of such a music lover as Obama, and his team of advisors and counselors: he himself embodied the “cool” side of an era that will end with the arrival of his successor.

During his whole mandate, he has been able to promote a conscious hip hop. With him, even when anger-ridden, hip hop seemed to lose its violence and clichés. When he hosted very symbolic guest Kendrick Lamar for the Independence Party last summer, he had him respect the protocol: the American rapper could not play the too polemical Pimp as a Butterfly, and had to avoid the terms “gang”, “gang sign” and “hood”.


Of course Obama loves hip hop! This is what the then Senator for Illinois said when interviewed in 2008. He revealed he liked Jay Z, this new American gangsta rapper who “has a great flow”, indeed showing his knowledge of rap vocabulary. But the politician mostly talked about his passion for Stevie (Wonder), Marvin (Gaye), the Temptations, and Earth Wind and Fire… what he likes to call “old school” music: those icons who transcended time and whom he chose to pay tribute to as a President.

Thus, the first artist he invited for an official concert broadcasted on the public TV channel was Stevie Wonder, whose music the presidential candidate had already included in the soundtrack of his campaign meetings. And the same music he is said to have danced to with his beautiful wife Michele… Among the guests of that special night were to be found Paul Simon, Esperanza Spalding and of course Black Eyed Peas‘ will.i.am, whom composed the hit “Yes We Can“.

TO HIM, THE ONLY COUNTERPART TO THIS EXHAUSTING DAILY LIFE WAS THE OPPORTUNITY TO “INVITE MICK JAGGER FOR A GIG FROM TIME TO TIME…”

“We organized this tribute to Stevie Wonder in less than a month, and this has already made history! Whether it be Dylan, Mick Jagger, BB King, Buddy Guy or other artists, you could see they felt a kind of magic, playing in front of such a music lover”, remembers Dalton Delan, executive producer for the In Performance at The White House shows series.


Obama constantly repeated it: these concerts remain one of his preferred traditions at The White House, a breath of air in a tightly timed daily schedule inside of the institution bubble. To him, the only counterpart to this exhausting daily life was the opportunity to “invite Mick Jagger for a gig from time to time…”

Upon arrival of the Obama administration, the musical tone of the White House changed drastically. New themes, like “Fiesta Latina”, “The Gospel Tradition”, “The Motown Sound”, “Memphis Soul”, “Red, White and Blues” replaced the classical music and the Republican heroes of Country music George W. Bush used to invite.

During his last year of mandate, President Obama had a huge craving for music at home, outside the official concerts – the last of which being a stirring tribute to Ray Charles when the President, after having introduced the singers and the band, resumed the song by inviting the crowd to sing with him. He also organized an outdoor festival on the lawn of the White House, and he hosted a “Tiny Desk Concert” of Common for the famous NPR radio show. And, for his last open-to-the-public Christmas in the garden, he invited Chance The Rapper.

Chance The Rapper at White House

Right from the 20th of January, things will radically have changed, and Donald Trump’s soundtrack – the new President had a hard time recruiting artists for his inauguration day – may well re-establish the good ol’ Republican tradition: full-on country music. For now, the new administration announced that the concerts would not be a priority, and that no in-White House show was planned yet. However, we still want to hope the presidential home would trigger new musical anthems… Yes We Can?

Sarz, ‘a shark in a pond’… as big as Nigeria
Feature