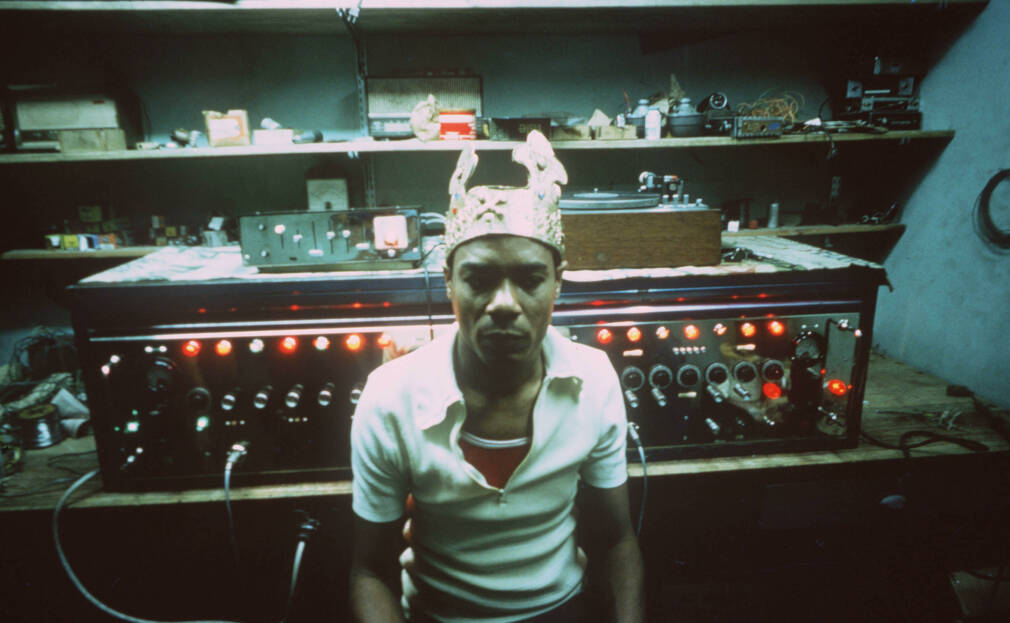 30 years since the assassination of dub’s founder, the King’s legacy still looms large over the world of music. To pay tribute to the King, hailed as the godfather of dub, PAM focuses on 5 tracks that represent the diverse talents and innovations of the late King Tubby.

Looking into King Tubby, born Osbourn Roddick in 1941 Kingston Jamaica, is like staring into the guts of an amplifier and trying to understand its relationship to sound. If you’re not an expert it’s one dense electronic mystery, but even to the untrained eye, there is an ordered beauty in the mangle of wires, power tubes, and speaker jacks.

So it goes with the music and legacy of King Tubby. Though you’re not sure how, you are certain that whatever you’re looking at works.

The analysis and review of King Tubby and his role in the golden era of reggae music is insatiable, but, as Chris Blackwell, founder of Island Records, once said, “there are no facts in Jamaica.” (Rolling Stone). So, to try and get past the facts and into the magic of Tub’s dub, we’ll take a look at 5 of Tubby’s tracks and let the King speak for himself.

King Tubby may have been one of the first producers and sound engineers to use their techniques to such an extent that the mixing room became a signature part of the music. The “version” culture of putting instrumentals on the b-sides of records, a trend that Tubby created alongside Ruddy Redwood after cutting the vocals from a Duke Reid studio session, allowed the producer to manipulate parts of the music that otherwise served as a canvas for vocals.

Legend has it that Tubby and Redwood took the instrumental version of Slim Smith’s “Too Proud to Beg” recording session to a dancehall and the crowd went so wild that the deejay had to play it fifteen times straight. (FactMag)

With instrumentals on the rise, drum and bass became front and center of the sonic atmosphere and, King Tubby, especially after the acquisition of his 4 track mixing board from Dynamics, was able to isolate each of these elements and apply his famous echoes, reverb, and high pass filters.

The King’s palace served as a remarkable asset for Tubby. Installing a whole recording studio in the back of his Kingston residence and transforming the bathroom into a vocal booth, the King had time to experiment and refine his sound; a luxury other reggae producers and musicians couldn’t afford due to the high cost of studio time. Tubby became the go-to for “versions” and using trademarks like his tonal rip and intense high-pass filters, Tubby was able to make each song his own, playing the recording with his studio as a musician would.

On the intro of Blackboard Jungle Dub, Tubby immediately lets the listener know who’s working the mixing board, using the massive filters and liquid echoes that were so well ingrained in Tubby’s music. The Upsetters, an iconic reggae group straight out of the golden era, who also worked with Tubby’s collaborator and rival Lee “Scratch” Perry, got a special dose of atmospherics for this album, and this track in particular.

Tubby was said to know sound down to the electron. Starting out as a radio engineer in Jamaica’s sound system culture, Tubby would repair amplifiers and transformers out of the back of his shack in a rougher part of Kingston.  Soon, Tubby was building his own amplifiers and speakers dawned Tubby’s Hometown Hi-Fi to play his favorite ska and rhythm and blues tracks for crowds on the weekends. Tubby also had a brief stint in pirate radio after building his own frequency, but the King shut it down due to rumours that the police were on the look-out for the late-night DJ, as David Rodigan explains in a BBC interview. “Sometime me an’ ‘im talk an’ me say, ‘Drop now Tubby!’ An’ ‘im get confuse an’ me jus’ draw down the whole a the lever … you hear ‘Pluck’ an’ jus’ start play pure distortion. Me say, ‘Yes Tubbs, madness, the people dem like it!’ ” said Bunny Lee (Ocean of Sound – David Toop)

Tubby understood sound so well that he could imagine what affects his effects might have. Moreover, Tubby was in his own way a scientist, experimenting through trial and error to find the deepest dub on the island.

With the support of a wealth of reggae masters, Tubby was able to push the limits of the genre, taking dub to psychedelic proportions. On one Tubby track, you can feel the peace of steady ocean currents, on the next, the rage of an electronic tropical storm. Sometimes the guitar lick echoes into infinity, and other times the drum is as sticky as fresh sinsemilla.

On this track, “A Ruffer Dub”, with vocalist Johnny Clarke and the Aggrovators (a name that was given to whichever outfit Bunny Lee was currently working with) we are introduced to a maelstrom of echo and filter.  Clarke’s voice nearly crumbles into its own echo, and Tubby taking a single guitar rip and crack of the snare, creates a whole landscape of sound that oscillates and syncopates with the music. Later, sirens flavour the track to highlight the menacing appeal of such wild dub. And of course, Tubby’s trademark tonal sound appears multiple times, another subtle yet transformative innovation of post-production.

Tubby was as willing to experiment with different artists as he was with different production techniques. The list of Tubby’s collaborators is a calling card of who’s who in golden era Reggae; Augustus Pablo, The Upsetters, The Aggrovators, Cornell Cambell, Carleton Patterson, Harry Mundie, Yabby You, Scientist, The Wailers, U-Roy… it goes on.

Although rivalries flourished on the island with so many big personalities and innovators fighting for the crown of dub master,  King Tubby remained almost universally loved by his peers. As a producer, Tubby could work freely among many groups, and with his unmistakable influence on the mix, he could spread his sound like roots into the ground-soil of dub-music.

From collaborations with jazz groups like God Sons on “Up da Merry” up-and-comers like Yabby You (a moniker that was given by Tubby himself) on classics like “Chant Down Babylon Kingdom” or reggae princes like Augustus Pablo on numerous albums including “Rockers at King Tubby’s”, Tubby was ready to lay the dub magic down on anyone who came in his doors.

Tubby also welcomed with open arms some notable outsiders who came to Jamaica to learn more about sound system culture and reggae music. Journalists like David Rodigan who have spoken at length about King Tubby and done much to bring his music to the Diaspora music culture of the UK were welcome visitors to Tubby’s Kingston studio.

In, “Desire”, King Tubby’s collaboration with Augustus Pablo, Tubby shows a reserved side to his dub mania, letting the instrumentation and Augustus’ voice come front and center, but giving the rhythms and vocals some extra flavour with his precise mixes. You can almost feel Tubby behind the controls, ready to take the song into another dimension at any moment, but staying back to give Augustus his spotlight. Like a magician throwing spells at his friend, or a King, benevolent with the great weight of his power, this collaboration is a simple yet profound example not of the extremes of dub, but what the nuances of dub mixes might offer to all musicians.

King Tubby’s innovations and experimentation re-oriented listener’s relationship to sound. It began with Tubby creating the highest quality amplifiers on the Jamaican island. His experience as an engineer and a music lover pushed him to have a deep, electronic respect for drums and bass.

Reggae DJ, producer, and King Tubby collaborator, Dennis Alcapone said to Fact, “King Tubby’s was definitely the greatest sound ever to come out of Jamaica. You wouldn’t listen to the other sounds, because they was just bringing out normal voices with normal bass. Duke Reid and Coxsone, their bass was heavy, but Tubby’s bass was just so solid.”

Tubby could get inside the amplifiers and customize them to the particularities of dub music and reggae sound. He would then bring his amps to live events and dancehalls and proceed to blow the public’s mind. The clear and quality rub of the dub was contagious and maddening for live audiences, and while others tried to imitate Tubby’s success, nobody could rival the sound of King Tubby.

Thanks to Tubby’s Hometown Hi-Fi and the previously mentioned rise of versions, live events and their relationship to the audience also began to transform. The instrumentals looped for hours while Tubby would relay effects on the spot and MC’s like U-Roy could fill the space between tracks with jaw-jackery and rip-roar to excite the crowd; an early predecessor to MC and hip-hop culture.

On ‘King Tubbys Skank’, you can hear U-Roy ad-lib all over the track, and lay the ground for what would become hip-hop. You can almost imagine U-Roy swinging the microphone cord around, pacing back-and-forth on stage, scatting and improvising behind a cloud of sensimilla smoke. U-Roy is here to shout-out, shake the public up, yoop and yolp, sing and chat, while the endless bass and rhythm of the King plays into the night.

It’s hard to overstate the impact of Tubby on contemporary music. Dance, DnB, Dubstep, Hip-Hop, and Ambient all find their precursors in Tubby’s work. Sound-system culture was quickly exported to the UK and New York, and with them the DJ, the sound engineers, and the MC.

If you listen closely you can hear the ripples of Tubby’s dub everywhere. In the breakdowns of iconic hip-hop tracks such as Outkast’s ‘Aquemini’, in the long echoes of Brian Eno’s Possible Musics, or the dirty drops of Plastician’s dubstep, Tubby is sitting behind the ghostly controls of modern production all over the musical world.

More direct torch bearers of King Tubby include the likes of Scientist and Prince Jammy, both dub apprentices who worked under King Tubby. These artists did much to push Tubby’s techniques ever further and develop a mainstream audience for the dub sensation.

In the track “Straight to Jammys Chest” Scientist gives us a taste to the future of dub, while remaining loyal to his dub roots. He begins to experiments with synthesizers, the traditional concept of a ‘drop’ and ‘false drop’, and a refined vision of effects which change on each instrument through each progression, depending on the needs of the sound in that moment. Precision, technique, and structure, all describe Scientist’s approach to dub. Thanks to his work with King Tubby, Scientist could explore deeper these areas of dub that Tubby had made possible.

Even today, King Tubby’s friends and collaborators continue to discover more of his work from the vaults of dub history. This week Patate Records will be releasing “King Tubby Meets Blackbeard’s Ring Craft Posse: Lost Dub From The Vault” an unpublished album of the Dub master, King Tubby. “Produced during the golden age of reggae, these recordings gathered dust until his son decided to search the many unexploited soundtracks. The result: a pure concentrate of the best of what Jamaica produced during the second half of the 70’s.” Patate Records.

To discover more of King Tub’s famous dub, listen to this playlist.