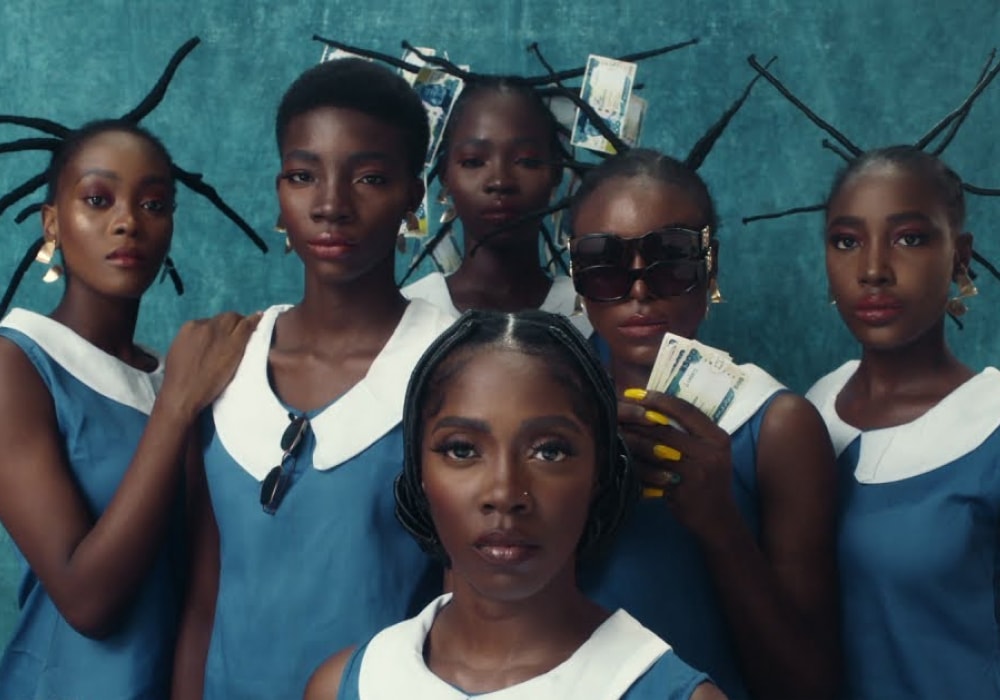 Here are our favorites music videos to come out this month featuring Burna Boy, FKA twigs, Tiwa Savage, Danny Brown, WizKid and more. You can also find them on our dedicated Youtube playlist.

Ahead of today’s Nigerian Independence Day, Burna Boy comes through once again with another impressive visual for one of his conscious songs titled “Another Story” featuring Ghanaian rapper M.anifest. The video celebrates Nigerian Independence Day by telling the story of Nigeria breaking free from under British rule in 1960. The track appeared in July on Burna Boy’s African Giant album.

Tyler the Creator – A Boy Is A Gun

Directed by Tyler himself under his Wolf Haley moniker, the rapper’s IGOR persona deals with a departing lover. We follow a series of vignettes that details an ongoing argument between Tyler and his lover. The narrative of the music video is framed in ultra-saturated, gritty pastel blues and greens like a grievous Wes Anderson film.

FKA Twigs unveiled a new single called “holy terrain” a song which includes a guest verse from Future. It follows the breaking-up single “Cellophane” released earlier this year, both extracts from her sophomore album Magdalene set to land this month. On “holy terrain”, FKA Twigs wants a man that can love twigs for who she really is, and not for money, a man who would treat her how she deserves to be loved.

Stormzy – Sounds of the Skeng

“Sounds of the Skeng” is the third song to emerge from the British rapper’s upcoming album. It follows recent Stormzy singles “Vossi Bop” and “Crown” released earlier this year. On the track, the rapper spits, “Five whole years on the circuit/ Every single year I merk it/ Every single year/ I switch flows, they jerk it/ I flip more, then reverse it/ Told bro to reimburse it, I just hope that it’s worth it.”

Danny Brown is back with a new studio album this month, and to whet appetites he’s just shared the video for its first single “Dirty Laundry”. In a press release, Danny Brown said of the new album uknowhatimsayin¿, “This is my version of a stand-up comedy album. Most of my close friends now aren’t rappers — they’re comedians and actors. So I wanted to create something that mixed humor with music. Something that was funny but not parody.”

Boj & Tiwa Savage unveiled alte-tinged new single “Your Love”, a laid-back slice of afrobeats off the forthcoming Afro Nation Mixtape. Directed by Director K who’s previously helmed videos for Davido and Teni The Entertainer, the result is a simple but picturesque visual. ‘Your Love (Mogbe)’ follows the release of Boj’s previous singles ‘Tunga’ and ‘Like 2 Party’ featuring veteran British rapper Skepta. Afro Nation Vol #1 will be the first in a series of compilations curated by indie label Moves Recordings in collaboration with Afro Nation Festival.

One month after the torrid “Be Honest” collaboration, the two superstars are linking up once more for the clip, “Gum Body”. Directed by British and long-time collaborator Meji Alabi, the African giant mourns his past regrets losing out on his love interest, “Oh I’m in love, in love, in love, in love / Like a junkie / A junkie for your loving”.

“Sugar Honey Iced Tea” marks Nokia’s first new music since her A Girl Cried Red mixtape dropped in spring 2018. She offers an all-American, pastel-coloured pageant visuals depicting Nokia winning the fictitous Miss S.H.I.T title. The video was filmed in a Harlem ballroom. It references not only the voguing culture of New York City, but also 60s-era Puerto Rican beauty pageants—the kind her mother participated in as a young girl. It also co-stars fellow MC Maliibu Miitch, and pageant fans may recognize some other familiar names on the registration list.

Tiwa Savage offers the Meji Alabi-directed video of the striking single “49-99” eponymous to her latest album released September 5. “’49-99′ is a term coined from the hard life many Nigerians go through,” explains the artist in a press release. The title references Fela Kuti’s song “Shuffering and Shmiling,” which addresses the lack of resources in underserved communities—especially with the line “49 sitting, 99 standing” about riding the bus.

“Ghetto Love” follows numerous notable collaborations for Wizkid including “Brown Skin Girl” with Beyoncé, “No Lie” with GoldLink and “Glow in the Dark” with Skepta. It’s the first official single along with the music video for this year ahead of his upcoming album. As far as the visual, the video kicks off WizKid surrounded by his entourage then quickly transitioning to shot of a young boy symbolizing the artist during his childhood.

Mahalia – What You Did (feat. Ella Mai)

U.K. rising star Mahalia has released the visuals for “What You Did” featuring Grammy-winning Ella Mai. Directed by recurrent collaborator KC Locke, the new video sees both singer-songwriters remaining calm as they sing in an old Volvo surrounded by an intense blaze. It follows her previous music video featuring Burna Boy, “Simmer”, extracts from her vibrant new album Love and Compromise released September 6.

Little Simz has released a tender video for her track ‘Flowers’, a warm, beautiful clip featuring Michael Kiwanuka as they perform a haunting live version of the album track. Recorded at London’s Metropolis Studios,  it’s a gorgeous rendering of ‘Flowers’, where Little Simz’ hard-hiding – hard-spitting – stance, it’s also effortlessly cool. The song is extract from her stunning album GREY Area, dropped back in March.

Listen to our playlist Women Power on Spotify and Deezer.

Los Angeles–based artist Sudan Archives unveiled two tracks off her debut album in one video.  In “Confessions”, the self-taught violinist mixes Northeast African folk violin with electronic music pushing R&B in another dimension. As an added bonus, the video transitions to “Black Vivaldi Sonata”, the second single off her forthcoming album Athena which is out November 1st via Stone Throw Records. As Sudan Archives said in a press release, “It is about being the seduced and the seductress, it’s about God & the Devil, Yin & Yang and about the possibility that we might have it all wrong about the two.”

Vagabon – Water Me Down

Vagabon has shared the music video of “Water Me Down” extract from her new album, which is out October 18 via Nonesuch. About the chill-pop track, the artist said in a press release: “My intention with ‘Water Me Down’ was to create a playground in which to explore difficult feelings with confidence, triumph and foresight”.

Maryland songsmith Brent Faiyaz is here with a new song in the same vibe as his previous release, detailing a seasonal lust story about his time in London. The self-directed clip was made in collaboration with Lonewolf (who’s worked with Lil Xan, MadeinTYO, and Kyle). Accentuated with plenty of scribbles and static buzz, the video calls back to a lo-fi early nineties vibe.