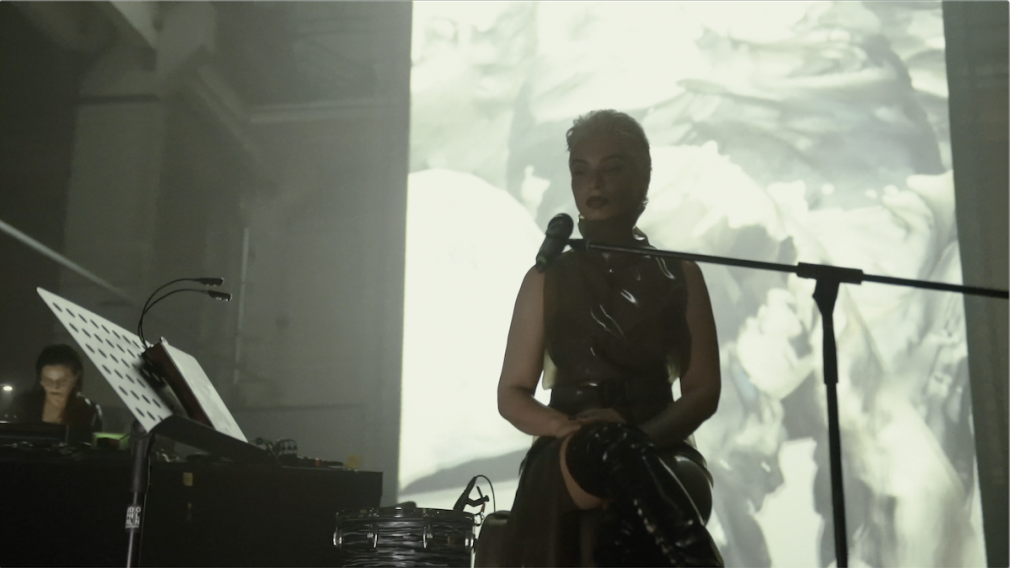 The witchcraft of LABOUR on new album

The album nine-sum sorcery is the first release from Berlin duo LABOUR. It marks an  ambitious project led by Iranian Farahnaz Hatam and American Colin Hacklander, known since 2018 for their large-scale performances in concert halls and museums such as the Kraftwerk Berlin, the Martin Gropius Bau and the Kunsthalle Zürich.

With their avant-garde style, the duo aims to link Iran, Kurdistan, Europe, the United States and Africa through myth and music. To do so, they feature guests like Kurdistan’s famous pop star Hani Mojthedy, as well as visual artists such as the Turkish Enes Güç and Zeynep Schilling, and the Slovak Evelyn Bencicova.

The ‘witchcraft’ refers to the ancient legend of Gog and Magog, the Persian modal music system Dastgah, the archaeologist and professor of ancient mathematics Hamid Parsani, the Iranian philosopher Reza Negarestani, and the Iranian poets Sohrab Sepehri, Ahmad Shamlou, Rahim Loghmani. For Farahnaz Hatam and Colin Hacklander, creative expression and philosophical research are inseparable. They are seeking to “create a space within the music where we can create the possibility of reaching into another place and perhaps asking the question: what is the nature of being?”.

The album can be understood as a hidden incitement to dark energies, a countdown that finishes with terrible, oil-drenched power that will be released in the Earth’s final reckoning, in which everything will be reduced to dust. This ritual is brought to light by enigmatic electronic compositions that are accompanied by percussion by LABOUR, as well as the haunting vocal performances of Mojtahedy, who delivers Kurdish and Persian verses: a poem by the Iranian modernist Sohrab Sepehri, followed by verses from the poems of Ahmad Shamlou and Rahim Loghmani. The melodic vocal line she uses follows the dastgah – a modal musical system that is one of the main components of traditional Persian music  employed here through the dastgahs Homayoun, Mahour, Hijaz and Nava.

LABOUR is also organising a residency in Berlin in order to get closer to Sabar, Mbalax, Sufi, Dakar and Senegal thanks to exceptional collaborations with singer Souleymane Faye, the fresh and avant-garde Ibaaku, drummer Birame Ndiaye Rose, Viviane Chididid and Mbene Diatta Seck.

The album nine-sum sorcery is available on all streaming platforms.