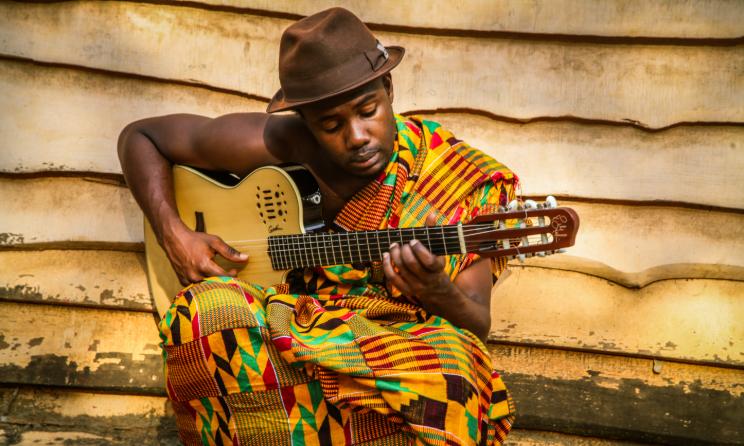 The Kyf! Invitational is an interactive audiovisual show inviting 8 African artists to perform with a traditional instrument from the continent. KyeKyeKu inaugurates the first session with the Penpensiwa.

The Kyf! project was born from the initiative of visual artist Youri Fernandez, bassist/keyboardist Kevin Bucquet and percussionist Fred Faure, who is passionate about traditional African music. In a 75-minute augmented concert, the trio experiments with different forms of interaction in a video generated on artist’s computer, controlling and modifying the lights or the projected video in real time. Without telling a concrete story, this abstract show revolves around the desire to collaborate and explore the African continent and its cultures through the eyes of the artistic team and its guests, whether they are dancers or musicians. Each artist presents a composition of their choice played live on a blue background, the only contraint being the integration of a traditional African instrument.

To launch the project, the team shares the performance of KyeKyeKu, a Ghanaian artist living in France who has been defending his afro funk project KyeKyeKu & the Ghanalogue Highlife on the stages of Europe for several years. Guitarist, singer and composer drawing his inspiration from the palmwine and highlife styles of his country, KyeKyeKu has decided to represent the Penpensiwa, an African instrument from the idiophone family. He wields this cousin of the mbira -an instrument familiar in Ghana, Mali or Zimbabwe- to offer a remarkably retro-futuristic electro-acoustic rapped performance. In Ghanaian Twi, the expression “Kwi kwi kwi kwi” is a way of jokingly expressing disapproval of an idea or proposal, in this case that of religious preachers who focus on the path to paradise while forgetting the environmental challenge.

On the way on Kyf! is the Moroccan Hamid Moumen and his guembri, the Congolese Rebecca M’Boungou and her sanza, the Senegalese Malikal Diop and his bongoma, the Nigerian Bako and his Gouroumi, the Franco-Burkinabe Kikoué and his Peul flute, the Moroccan Aziz Aflak and his oud, and finally the Burkinabe griot Seydou Diabaté and his balafon!

Find out more about the project here.