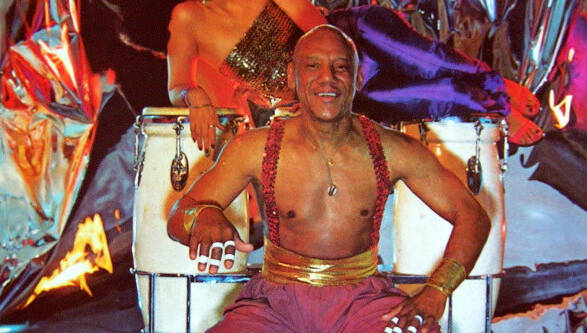 Cándido Camero Guerra known simply as Candido is one of the pioneers of Afro-Cuban jazz and an innovator of the conga drum. Born in Havana, Cuba in 1921 to a father factory worker and stay at home mother, Candido showed a prodigious penchant for rythme, beginning drumming at the age of 4 by beating condensed milk cans. Tutored by his uncle who played the bongos, Candido became a professional musician at just 14 playing in nightclubs and street parades around Havana. Throughout his life Candido would innovate how one played the bongos and after moving to America, an entire movement of Afro-Cuban jazz; playing rhythm with one hand and soloing with the other, playing multiple bongos simultaneously, tuning the drums to play melodies, and inventing a device that allowed him to play the cowbell with his foot.

Candido’s 1979 classic Dancin’ & Prancin’ with the aptly titled track “Thousand Finger Man” is a wonderful and funky display of the drummer’s contagious virtuosity. The album pushes Candido firmly into the disco generation with the swinging groove accompanied by the stabby riffs of a Rhodes piano and clavinet. Released on Salsoul Records and full of the era’s most talented studio musicians from Latin trumpet player Joe Cain, vocalist and drummer Woody Cunningham or pianist Louis Small, the 4 track LP is a dense dance epic.

Candido’s congos are of course the defining feature. The drums can carry the melody, rip into new rhymes and often break into solos. “Jingo” is certainly a high point for the drums, though “Rock And Shuffle (Ah-Ha)” which features the infamous foot-cowbell, and the title track aren’t to be ignored. Overall the disc is a dancefloor surefire and a sweltering example of the amazing mash of Afro-Cuban percussion and the emerging disco generation. Candido, Rest in Power!