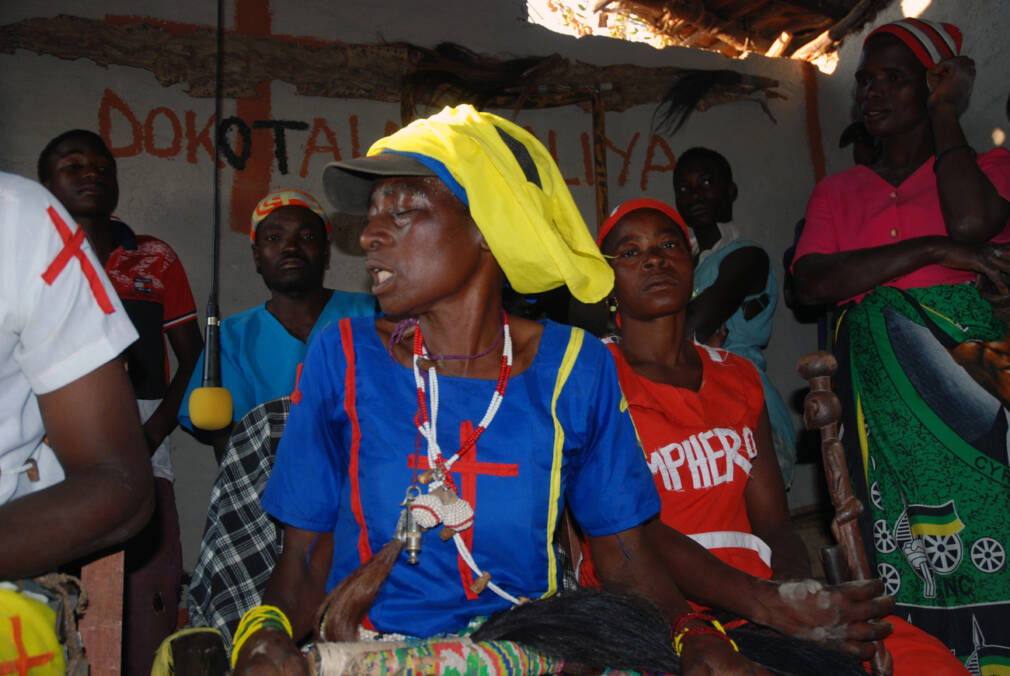 Viyezgo. Vimbuza from Mzimba South, second album from the “Sacral Grooves 1000HZ” series, is a recording of the high priestess with her local drumming group performing their hardcore version of the Vimbuza’s ritual.

As a vimbuza doctor from Endindeni village, Amaliya Kabila is much admired amongst the Tumbuka community in Northern Malawi. The release of Viyezgo. Vimbuza from Mzimba South is sure to extend her reach beyond, this time, as an accomplished musician. She is considered one of the leading figures in the region. Skilled in her craft, she is thought to be capable of healing people suffering from spirit possessions, or attacked by witchcraft, identifying witches, finding kidnapped children, stolen cattle and missing people with the help of spirits she invokes through Vimbuza ceremonies.

The healing ceremony, encompassed into the wider Ngoma traditions, is practised amongst the Tumbuka to help people, mostly women, afflicted by mental illness. Originally developed to overcome traumatic experiences of oppression, it was heavily vilified during British colonisation and forbidden by Christian missionaries. Still today, even after being inscribed on UNESCO’s Representative List of the Intangible Cultural Heritage of Humanity in 2008, Vimbuza is still condemned by most Chritian churches and shunned by modern medicine.

Vimbuza has many meanings. It refers to the illness caused by spirit possession, the spirit itself, therapy but also describes the dance and its distinctive highly percussive rhythm. The ceremony takes the form of a trance-like ritual where three drummers embark into the making of an astonishingly fast multi-layered rhythm. The healer, caught in frantic dance, accompanies them with a whistle. Amaliya Kabila is known for taking it to a even higher level, producing a hardcore version of Vimbuza. Viyezgo. Vimbuza from Mzimba South is the second album of the “Sacral Grooves 1000HZ” series dedicated to music performed for non-human entities. It is a recording of Amaliya Kabila, performing the cult of possession, with a local drumming group. The recording was then arranged by Piotr Dang Cichocki and the high priestress’s nephew Happy Mphande. The result demonstrates Vimbuza’s hardcore trance-power.