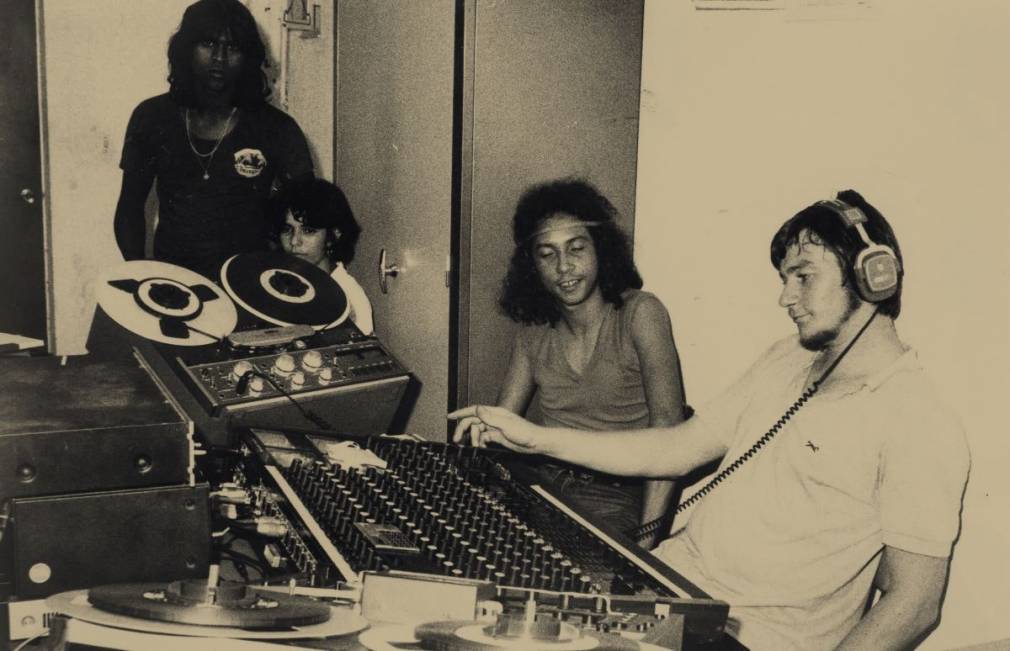 Lézard Vert resurfaces 37 years after its release on Reunion Island. A groundbreaking work in electronic maloya music, this treasure from the Indian Ocean is part of the island’s cultural identity, which has long been divided between sega music (associated with colonialism) and traditional maloya that refers to the torments of slavery.

Once again, the Mauritian label Babani Records champions the hidden treasures of its archipelago and moves to re-release a unique 33 rpm vinyl that holds a special place in the history of maloya music. To do so, it has teamed up with the legendary local producer Ziskakan, who comes from Creole origins. Recorded in 1983, the record belongs to a key period in the history of Reunionnaise music, when the need for its inhabitants to assert their identity became apparent. It should be noted that at that time, producers were only able to work on singles, as Reunion records always featured two sides: maloya and Chanson Française. This re-release of Lézard Vert connects new generations with the reality of contemporary Reunionnaise music by showcasing maloya – a form that reconciled tradition and modernity without having to merge with the sounds of the French coloniser. It is this revolutionary spirit that the group (including guitarist Teddy Baptiste, bassist and percussionist Kiki Mariapin and guitarist Jean-Philippe Bideau), founded by the composer Zoun (Jean-Michel Toquet), aimed to embody.

A record symbolizing the end of the great orchestra balls

From Ti-Fock to Alain Peters to René Lacaille, Alain Mastane, Bernard Brancard, Kiki Mariapin, Teddy Baptiste, Zoun… all the pioneers of electric maloya share the common point of having started in ballroom orchestras. Together, they made up a pleiad of groups: The Lynx, Pop Décadence, the Super Jets, Fock Group, The Play Boys, Jazz des ïles, Soul men before touring the Island, relying on covers from French and international It is in this context that Reunionnaise music, long divided between a sega, which bore the colonial stamp, and maloya, which referred to the torments of slavery, began to take form. An unprecedented cultural revolution followed against a backdrop of differing identity claims. Having just been brought out of the darkness by the Communist Party of the Reunion, the maloya became the main medium through which this new musical culture aimed to reconcile tradition and modernity. Faced with this experimental current and the advent of the sound system, popular orchestras gradually ran out of steam. In the mid-1980s, discos and DJs replaced the good old ballrooms. The orchestras then played their final scores, it was the end of the road for a whole generation of self-taught musicians. On the other hand, it marked a new dawn for creative and independent artists, finally freed from their oppressors.

The album Lézard Vert will be available on November 27 via Babani Records and can be pre-ordered here.