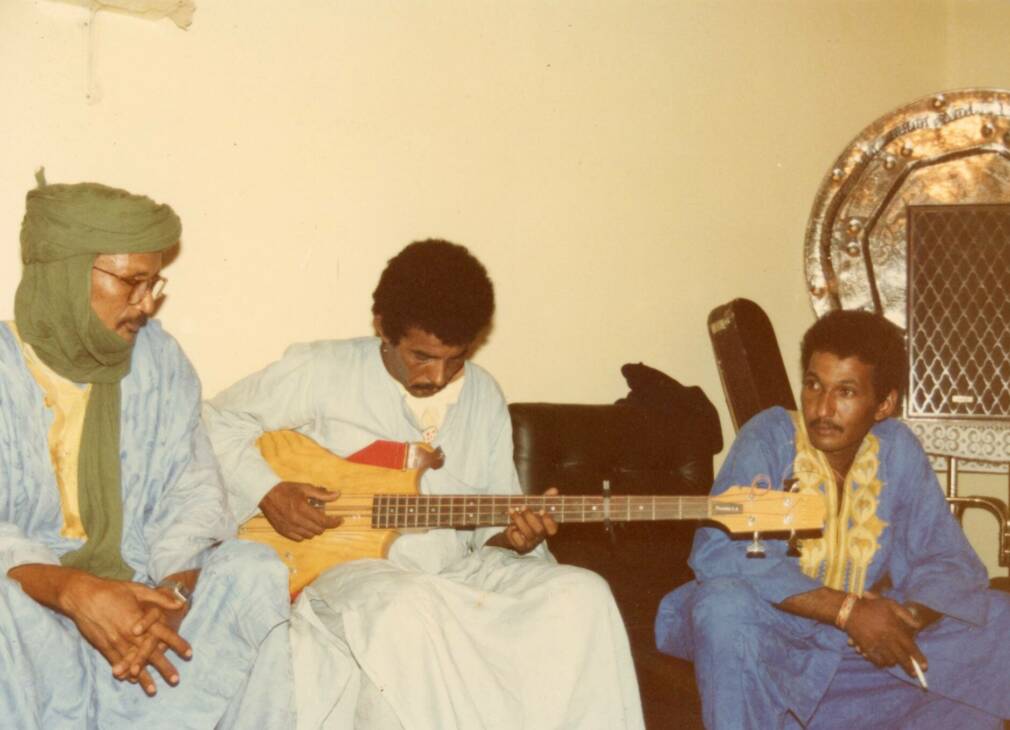 The well known band Tinariwen offers a reissue of their first album Kel Tinariwen, initially released on cassette in 1991 and produced by Keltoum Sennhauser.

The Malian band Tinariwen, needs no introduction, yet some of their earlier work had been forgotten including an early cassette tape, Kel Tinariwen, their first official record which never enjoyed a wider release until now. The cassette was recorded by Abdallah Ag Alhousseyni, Hassan Ag Touhami aka ‘Abin Abin’, Kedou Ag Ossad and Liya Ag Ablil aka ‘Diarra’, in Abidjan, Côte d’Ivoire, in the early 1991 summer. Kel Tinariwen was produced by Keltoum Sennhauser, a painter, poet and songwriter. Sennhauser, daughter of a Songhai father and a Tuareg mother, grew up partly in Bamako, partly in the Kidal region of north-eastern Mali, where members of Tinariwen live.

Sennhauser’s involvement in the project was instrumental in the making of Kel Tinariwen. She imbued it with her fights for Tuareg’s rights to freedom and self-determination. Indeed, by the end of the First Tuareg Rebellion, which occurred between 1962 and 1964, just two years after Mali’s independence, Tuareg-populated northern regions had been placed under a repressive military administration. It triggered a major exodus to neighbouring countries. The drought that followed first in 1972 then a decade later in 1984 further accentuated this phenomenon. Sennhauser and her family, who lived in these regions, were forced to emigrate. Sennhauser saw music as a potent means to tell about the Tuareg’s struggles, cassettes in particular:

“I think the cassette played a crucial role as a tool of communication, a tool that was very dear to us. It served to raise awareness and awaken the consciences of those who felt that everything was already lost, or that we didn’t have the wherewithal to win our struggle. It allowed the Tuareg world to develop its own conscience and move forward. In our milieu, the only thing that can make us question ourselves is music. Because we listen to a lot of music, we love music, we love poetry. We don’t read. We’re not a people who read. So, the only reading we have, about ourselves and about the outside world, is music.”

However, Kel Tinnariwen was never heard outside of the local community that traded cassettes back in 1992. A situation which is soon to be remedied. The record reveals another side to Tinariwen’s sounds which should rejoice diggers. Their trademark sound had not fully matured. Still, their signature hypnotic guitar lines can be heard alongside “call-and-response vocals”, raw drum machine rhythms and keyboard melodies.