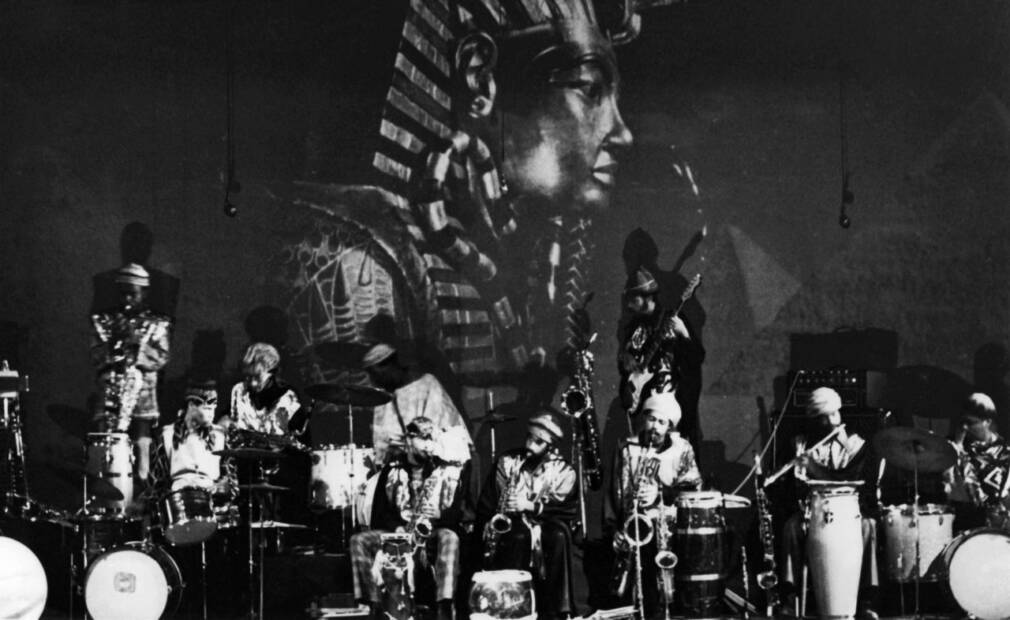 Strut Records presents the final installment in their series of Sun Ra reissues with this new project recorded in Egypt in 1983.

Egyption percussionist Salah Ragab’s first interaction with Sun Ra was at a concert in 1971. This event happened five years after the creation of the Cairo Jazz Band, founded by Ragab himself alongside German musician Hartmut Geerken and Eduard “Edu” Vizvari. While serving as “Chief of Egypt’s Military Department of Music”, he chose 25 professional musicians of the thousands-large group he was in charge of, and organized the Cairo Jazz Band’s first concert in 1969, while Geerken and Vizvari arranged and composed for the group.

Although Ragab and Sun Ra did not interact extensively in 1971, Sun Ra had come to Gerkeen’s invitation, they did bond together when Ra returned to Egypt in 1983 after a European tour, leading the musician and his orchestra to record an entire album with the Cairo Jazz Band. At El Nahar Studios in Heliopolis, the two bands played the studio versions of Ragab’s compositions “Egypt Struth” and “Dawn”, and recorded three other songs with Ragab on congas. The original record of ​​Sun Ra Arkestra Meets Salah Ragab In Egypt was released in 1983 via Greek label Praxis.

British label Strut Records is now set to reissue the project. A true dive into history, each track of the album has a special anecdote, from “A Farewell Theme” being played at president Gamal Abdel Nasser’s funeral to “Ramadan” and “Oriental Mood” being first heard on the Cairo Jazz Orchestra album Egypt Strut. This reissue will also feature previously unseen photos and memorabilia alongside brand new liner notes by Hartmut Geerken and Paul Griffiths. You can already listen to “Egypt Strut”, already available and remastered by Technology Works.

Sun Ra Arkestra Meets Salah Ragab In Egypt, out on April 8 via Strut.

Listen to Sun Ra Arkestra in our Songs of the Week playlist on Spotify and Deezer.