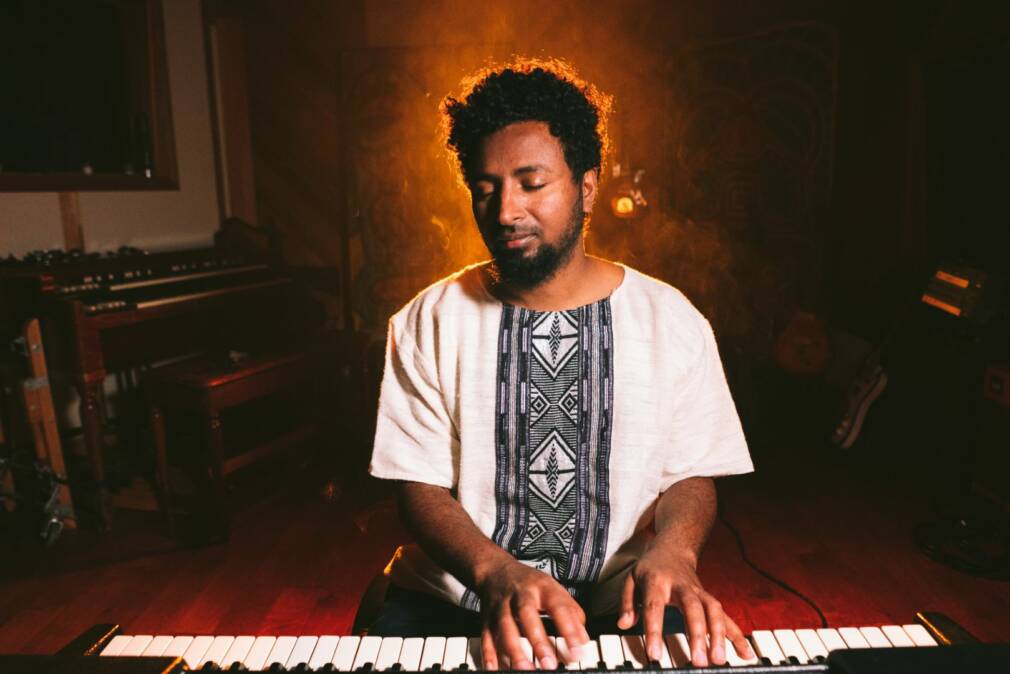 Los Angeles-based label Flying Carpet Records announces the release of Here and There, Kibrom Birhane’s third album in which the Ethiopian jazzman experiments with the ancient deep jazz roots of his native Ethiopia.

Since his childhood, Kibrom Birhane has had an interest in Ethiopian musical traditions as he studied Ethiopian orthodox chanting and traditional instruments at a monastery, later focusing on Ethiopian Jazz artists from the 1970s. His spiritual sensibility is imbued in all his work and prompted him to join the Ethio-Cali Los Angeles-based jazz ensemble whose members included the likes of Kamasi Washington, Dexter Story and Mark De-Clive Lowe.

For the purpose of this album, Birhane drew on his taste for modern Ethio-jazz and knowledge of thousand-year-old musical histories to experiment with Ethiopian jazz motifs, East-African funk, spiritual jazz, soul and psychedelic music. Here and There is an innovative blend of different influences ranging from the sacred and profane, and from ancient musical traditions to the work of Birhane’s contemporaries.

The album was recorded with a prestigious roster of LA-based session players, including previously mentioned tenor saxophone player Randal Fisher, drummer Kahlil Cummings and grammy nominated trumpet player Glenn Holdaway under the direction of producer Kamal de Iruretagoyena Humphrey during an intimate live studio session at Flying Carpet Studios. “These musicians are all special. They help me fuse my understanding of Ethiopian music and interpret current sounds, but it still has all the vibe”, Kibrom said of the album.

Here and There out June 24th via Flying Carpet Records.