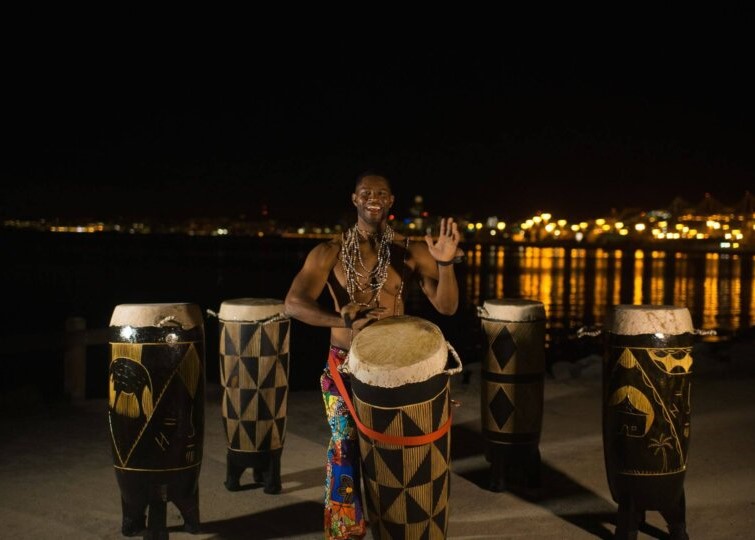 The son of Malonga Casquelourd perpetuates Congolese folk traditions in the footsteps of his father, the famous ambassador of Central African dance in the United States and founder of the Fua Dia Congo Performance Dance Company.

This Congolese sensation from the American West Coast, Kiazi Malonga has released “Lomami,” a single taken from his first album, Tembo Kia Ngoma. The full LP is due out at the beginning of March as a tribute to the Congolese culture he inherited. Kiazi Malonga is a second generation American of Congolese origin. Born into a family of artists, his late father, Malonga Casquelourd, was a world-renowned musician who taught Congolese dance, drumming and folk performance art via his Fua Dia Congo Performance Dance Company – the first African dance and drumming company in the United States, based in Oakland.

On this album, Kiazi honors his father’s legacy: “This is my first studio project honoring the work he did, showcasing my culture and recording compositions and songs of his generation that have never been captured.” Tembo Kia Ngoma literally translates as “the wind of the drum” from kikongo, and Kiazi elaborates on its meaning: “Tembo (to be the wind) can also refer to the vibration of sound waves that hit you, often when a car with an incredible stereo system stops next to you. His favourite instrument is the ngoma, a traditional drum from sub-Saharan Africa, whose beat resonates over the course of the album’s ten tracks.

Each track is distinguished by its Congolese rhythm. The first single, “Lomami,” mixes rhythmic elements from the mutuashi dance, which means “test” in Tshiluba (the language spoken in Kasai). The song is dedicated to the untimely death of Diaka Fungula, Kiazi’s elder cousin. He concludes with these words: “This is a first step in my contribution to sharing the beautiful culture of which I am a part … Congolese culture.” As the wise old Fulani elder Hamadou Hampathé Ba said, “When an old man dies in Africa, it is a library that burns down.” Kiazi is one of those who are fighting for the survival of its rich cultural heritage, the one that is transmitted and carried from generation to generation.

Tembo Kia Ngoma will be released on March 5, 2021 via Malonga Music.