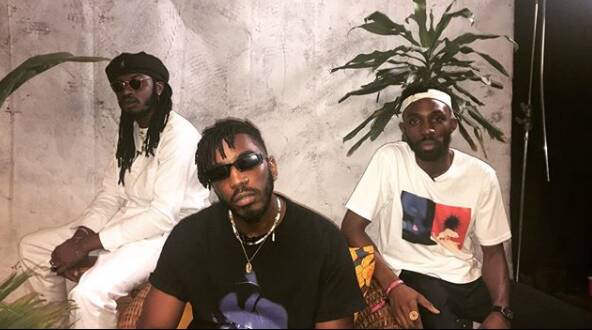 DRB LasGidi brings the Alté community together on debut album

Composed of Boj, Teezee and Fresh L, the trio releases its first official album… after 10 years of career.

The trio is considered by many to be the founders and ambassadors of the Nigerian Alté scene, this bubbling wave of diverse artists who refuse to give in to the mainstream. Behind these futuristic and provocative looks, this wavy music and its stylish visuals are the vision of the 3 artists, who before becoming figures of the Lagos scene have toured Nigerian and English universities in the 2010’s to establish their popularity. For DRB LasGidi is not just a music band. Teezee, for example, has for many years been extremely engaged into fashion and visual arts in West Africa. He has also co-founded the cultural magazine and website NativeMag, “the reliable pulse of the African millennial”. This organization, with which Boj and Fresh L are also associated, is at the centre of Lagos’ culture: it organizes an annual festival, has collaborated with Nike to release its line of jerseys, and is follows African music and fashion. Boj is also a real central figure in Nigerian music, known for his numerous featurings and his recognizable voice – his latest EP, “Make e no cause fight 2”, is in collaboration with rapper Falz and Ajebutter22. Fresh L, finally, is the band’s rapper, known for his incendiary releases on social networks.

Connected to as to London, close to Skepta or Davido, their first album describes well their state of mind: “Pioneers”. The 12-track project brings together the best of the Alté scene (Odunsi, Prettyboy D-O, Tems, Wani, Vivendii Sound, Maison2500) but also well-established artists like rapper Olamide or the singer Lady Donli. Musically, the 3 friends deliver wavy Afrobeats, leaning towards soul or rap depending on the tracks. Fresh, energetic and new, “Pioneers” is a real plunge into the universe of the trendy and uncomplex youth of Africa’s biggest city. The group also accompanied the release of the project with a short documentary tracing their 10-year impact on culture.