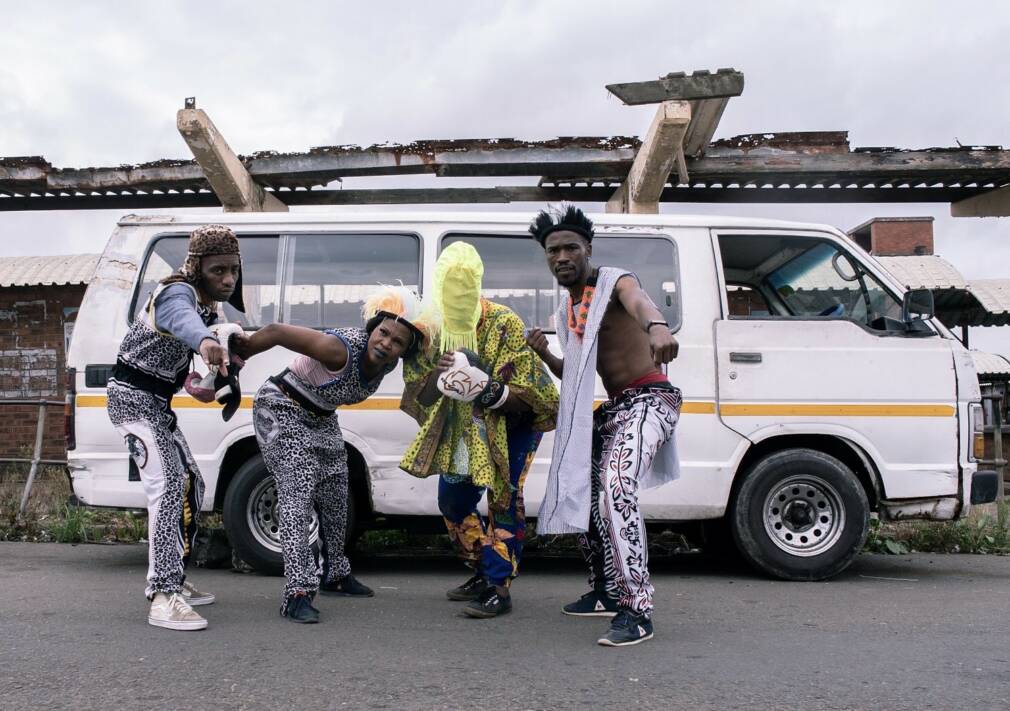 Driven by a need to produce politically-motivated music and to shake things up, the trio made of band members Malathon and twins Makan Nana and Khera came together in 2012 in the Mlaszi township of Durban in South Africa. Their debut album 2013-2019 released in 2020 took the gqom scene by storm. By mixing the dark house music inspired by kwaito with the toyi-toyi (a powerful dance accompanied by protest singing that was used during anti-apartheid demonstrations to intimidate police and security forces), their message was definitely revolutionary.

This distinctive feature has not been lost in their second album Ama Gogela which sees the band’s return. The lyrics of the single “I don’t feel like legs” sung both in isiZulu and English can be heard alongside the police sirens, thick bass and dense percussive chatter. It serves as a call to action for anyone listening.

The album’s name itself is evocative. Inspired by a ferocious South African bee, it reads as a metaphor : the goal is to leave you restless, just like after having been stinged by the insect.

“The same thing happens when that bee hits you hard. Once it stings you, you can’t manage it, it’s painful. It’s like our songs – once you listen, you can’t stop”, they explain.

While the message is evidently political, Phelimuncasi is not losing sight of the dancefloor. Harnessing South Africa’s ancient theatrical and storytelling traditions, the band tries to imbue the new album with the same distinctive energy.

“We believe our music is irresistible, you can’t sleep or chill while it’s playing.”

The album also features an impressive range of diverse talents with the return of DJ MP3 and DJ Scoturn, already present in their first album, with the addition of locals DJ Nhlekzin, DJ Ndakx, amongst others. They all give credence to the dynamism of Durban’s globally prestigious gqom scene.

The album Ama Gogela will be out May the 13th via Nyege Nyege Tapes.

Listen to Phelimuncasi in our afro + club playlist on Spotify and Deezer.