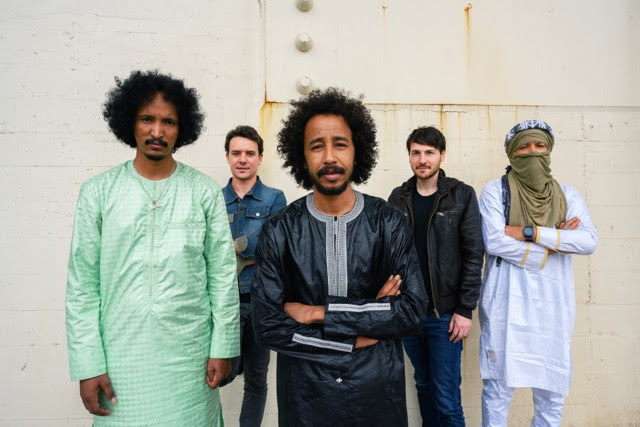 Tamikrest returns with a new album Tamotaït, a powerful, irrepressible rock and roll statement, due out 27 March on Glitterbeat.

On Tamotaït, Tamikrest’s fifth studio album, the music blazes bright and long. With the political situation so volatile and desperate in the Saharan ancestral lands from which Tamikrest come (for much of the last decade, the band’s founding members have lived in Tamanrasset, Paris and at times along the desolate Algerian/Malian borderlands), this is more than an album. This is resistance. But in there, too, is the dream of the future. “The definition of the album is there in its title,” explains singer, guitarist and songwriter Ousmane Ag Mossa. “Tamotaït means hope for a positive change.”

“Awnafin,” the first single taken from the album, finds the band not only turning up the volume, but also sharpening their meditative atmospherics and ruminations on the state of the Sahara and the world beyond. “My dearest wish is to see this desired flag raised that will unite all the people of Kel tamasheq” is currently said in the hopeful lyrics. The album features acclaimed Moroccan singer Hindi Zahra as a special guest and a track cut with Japanese traditional musicians.

Tamotaït, out on March 27th via Glitterbeat. Discover the album artwork below and pre-order it now here.

Read next: find Tamikrest’s Chatma on our 80 best albums of the 2010s list.