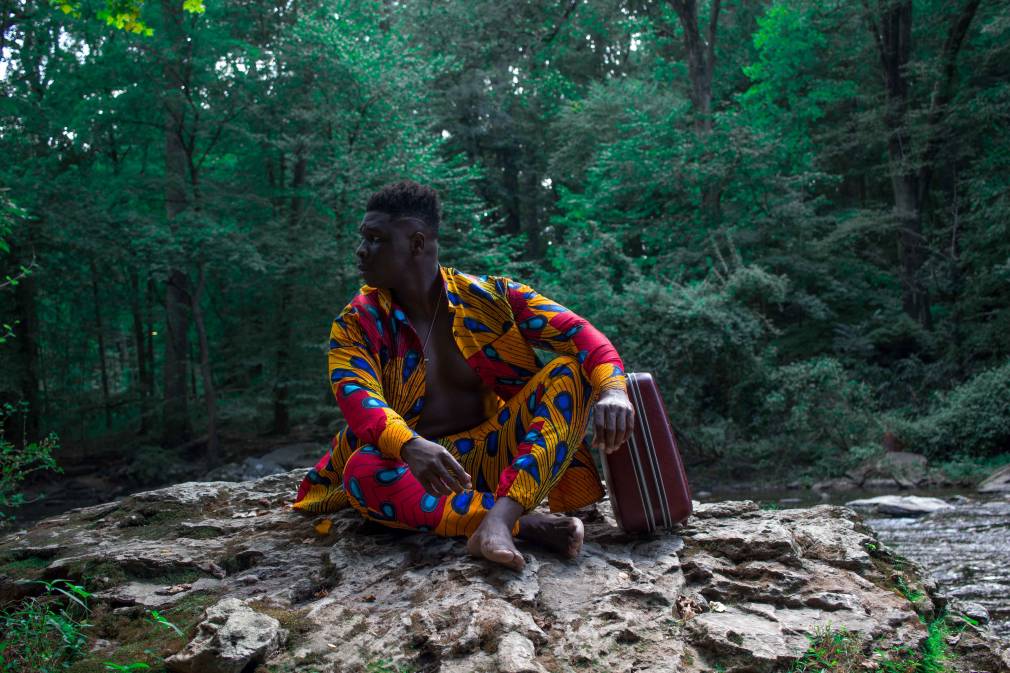 Guitarist and songwriter Saint Ezekiel announces the release of Everything is Under Alarm, a mini-album that floats between afrobeat energy and abundant soul. Listen to the “Original American Dream” preview while reading PAM’s interview.

Born in Philadelphia to Nigerian parents, Saint Ezekiel was spotted by James Poyser, multi-instrumentalist and member of The Roots, during an open-mic session. Boosted by this auspicious star, he is now releasing his first mini-album combining his African roots with the sounds of the Western world. Through this ode to social and spiritual freedom, he unleashes various influences, from highlife to afrobeat and mixes them with a light smattering of folk and neo-soul.  This new single, “Original American Dream,”  describes the American dream as an illusion and Saint Ezekiel’s voice clearly conveys natural ease and confidence. This is accentuated by the melodies’ simplicity on beautiful pieces such as “Ikeja Dreaming” and “Flee to the Amazon,” which will please fans of a range of artists, from Tony Allen to Keziah Jones to Michael Kiwanuka.

The title of the album sounds pretty pessimistic. What is the message behind it, and the main topics that you develop in your songs?

The title of this project is deliberately framed as dire or pessimistic because it is an anastrophe of the phrase, ”Everything is under control, no cause for alarm”. The gravity in this phrase comes from the western world’s constant need to allay the hearts of the people when in reality, everything is under alarm. The calming nature of the artwork, a photo taken by Joshua Olumakin, further pours calming energy out to the viewer.

What is the story of this song in particular, “Original American Dream”?

When we think about the American Dream, images of entrepreneurial successes and infinite possibilities are the images that may flood our mind. Since its inception, America has likened itself to be a champion of freedom however the various freedoms that this nation and most of the Western world enjoy, are predicated on the destruction of black and brown bodies. The myth of the American Dream is that when an immigrant comes here, they will be able to enrich their lives much easier than they would have in their countries of origin however; difficulty at the hands of the system, police brutality and divided country are the realities of the dream.

The press sheet tells us that you have been influenced by your parents. Can you tell us what you were listening at home that influences you until today, especially in this album?

My sonic experience as a child was a blessing and certainly served to one the foundation of my tastes and inspiration to write the music that I do. I spent most of my time listening to West African music from the 70s-80s. That was Ebenezer Obey, Fela Kuti, or Sunny Ade. These artists helped me construct an understanding of Nigeria and dip my feet into idiomatic expressions that would come to be an extension of myself. Alongside the staple Nigerian artists, I was being exposed to artists like Magic Systeme and Kofi Olumide at African Markets in West Philadelphia. As I got older, I absorbed the sound of Philadelphia by osmosis, filling my ears with jazz and R&B in order to learn more on structure.

The press sheets also indicates “for listeners of Burna Boy and Sango”, which are totally different styles. How would you define your own musical combination?

Burna Boy and Sango in my opinion, happen to be doing the same sort of thing which is telling stories through pieces of music that pay homage to the culture. Sango does this by calling on the pieces of the diaspora and shining a light on the bridges that can be created through the unique heritage of Africa (Da Rochina 1-4). Burna Boy does this by adding samples of African artist-heroes to his work; whether that be Angelique Kidjo or Fela Anikulapo Kuti. These artists exemplify what it means to honor the ancestors and their traditions while adding to the body of work and championing new methods for the next generation. I believe my music does the same.

The album will be available on the 4th of December. Pre-order Here.

Oxlade on the verge of global acclaim
Feature