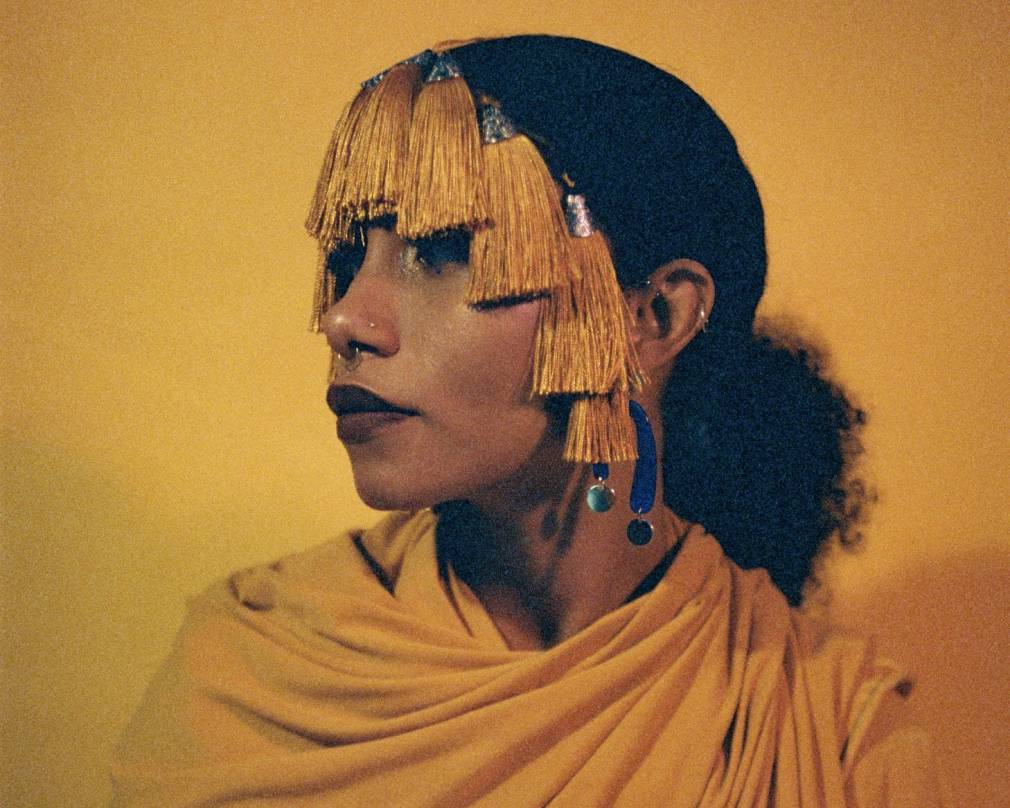 On her new single “SERGIO”, the Kenyan-South African BŪJIN draws a vivid satire of modern colonialism. She explains the metaphor in a nearly philosophical interview.

A versatile artist, Dani Kyengo takes advantage of her Kenyan and South African roots to work on music in all its forms and develop an avant-garde soul that she has been producing since the beginning of the year. After the mystical “Rosalinine” and the more energetic “Weird Venom” which oscillates between gqom and dancehall, she invites trumpet player Keegan Steenkamp on her third single “SERGIO”, a jazzy downtempo track with a haunting and introspective groove. Rather than praising Rio de Janeiro and Cape Town through their beaches and cocktails, she breaks the exotic dream of the average tourist to transform it into a dark poetry, deviating the ideal of the character of Sérgio Mendes towards a sinister allegory.

You wrote Sergio in one day without imagining the final message. What was the initial intention ?

The initial intention was to exorcise a feeling more than show up with lyrical intent.  I tend to write from imagery, memories, sketches of sound because there’s a porousness to my imagination and how I think through sound…  What it holds, what slips out, lets in and multiplies in between its motions. It leaves room for anything to become something and something to become a dialogue, or less of a single story.

How was the working process with Keegan Steenkamp on this song ?

We flowed really great. He’s a good friend, an incredible and thoughtful musician and someone I’ve hung out and collaborated with before. We worked on a long form sound/performance installation last year that I devised for the art festival Infecting The City and a sound installation I took to Berlin.  When he was over one day at my place, I played him the song. The next time, I showed him the trumpet motif I thought of as an intro. Instead of recording an intro we recorded and improvised for the whole track.

In this song, are you talking about Sérgio Mendes ? If so, could you develop the metaphor ?

Moments in conversations hold onto my imagination quite vividly until I exorcise them – sometimes literally. Sérgio became that metaphor that occupied a lot of my mental space after a conversation I had with a friend who’s another radical artist and thinker, long before I wrote the song. We spoke about practices of resistance and colonial hauntings of space and land, Cape Town in particular. Its many semblances to Rio de Janeiro came up. “…Except, we have a Signal Hill and no Jesus”, I recall what was echoed in the conversation.  So when I wrote the song I tended to this image, carefully, in my mind. I laughed at it a couple times too. The image of a passively watching Christ the Redeemer – the “all-seeing”, but not the all-saving.  Those feelings of saudade, desire, disillusionment, and betrayal that comes up when you realise that perhaps even our emblems of faith or “our” spiritualities have been penetrated by a ubiquitous colonial myth that something, someone, maybe is coming to save you and us… ?  Or that black folks “needed saving” from ourselves to begin with ? Then I think about how, just as casually as Sérgio Mendes plays that unmistakable piano intro to “Mas Que Nada”, we dance. That version is etched into imaginations all over the world. Even though Jorge Ben wrote the original.  That Christ image together with the rolling percussive piano intro to Mendes’ ​“Mas Que Nada”, ​ playing over and over and over, taking over my mental space until it turned to something sinister, this is what came to mind. It’s quite dark. For me this is the Sérgio metaphor.

You are talking about the common colonialist oppression towards South African and black brazilian people. Why do you talk about them in particular, and why telling the story through the city of Rio de Janeiro ?

As a musician, artist, a storyteller who works with sound, my role is to imagine. I can imagine by way of sharing with others, the role that critical imagining has in collective resistance for black people with complicated histories, identities, socialities and hauntings.  I like imagining. For me it’s one of the most liberating muscles to exercise through music, when for so long I or someone like me, perhaps hasn’t been allowed to ​just ​imagine, right ?  Whether I’m talking about Rio de Janeiro or Cape Town, metaphors, symbols and processes of imagination is a part of that storytelling, and it extends into a practice with sound, composition and intentionality, land and time.  It’s somewhat a way of connecting dots by way of storytelling. Making sense of roots and networks of blackness, or displacement, or joy and resistance. Whether that’s Rio or Cape Town or Guyana. It’s about people who’ve collectively experienced certain colonial audacities on our land, and continue to experience its many contemporary parasitic mutations.

This single is very deep and introspective. Musically speaking, what kind of sound can we expect from your next releases ?

I always say the same thing for this type of question : don’t expect anything !  Don’t expect a next. I think it’s something we need to become more attuned to and accommodating of as cultural consumers and producers ; that the artist reserves the right to be like, ​“that’s it, I’m done. I’d like to work on this part of myself now. ”  I’ve been working on a solo project and several collaborative ones, but what I’m really looking forward to is finishing a short film score and performance installation I’m in the midst of developing. But everything is impermanent right now, I’m just leaning into that feeling with as much grace as I can.