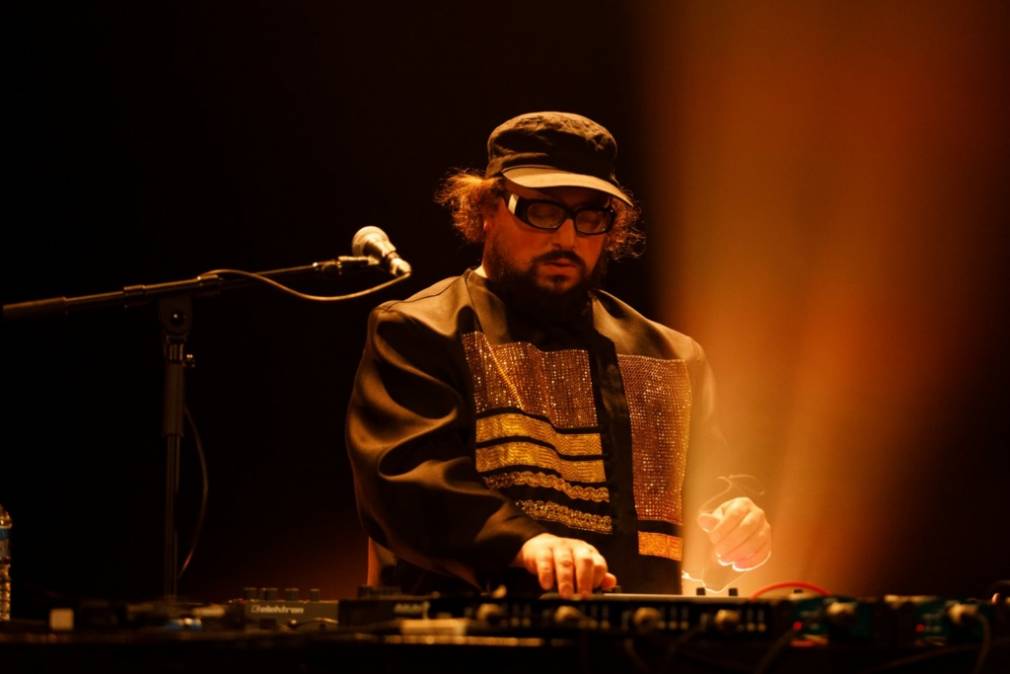 Stop everything! Ammar 808 has just released a new album

Awaited by many, producer Sofyann Ben Youssef – armed with his subsonic project Ammar 808 – is back with Global Control / Invisible Invasion, a new album recorded in Chennai, capital of the Indian southern state of Tamil Nadu. PAM met with the Tunisian musician.

In 2018, Ammar 808’s debut album rocked the entire Global Bass scene. The tracks that compose Maghreb United were playlisted in all the major selections, acclaimed in all the festivals and praised all around the Mediterranean region. From Arabstazy to Acid Arab, every single artist admitted they experienced – not without pleasure – the “greatest listening time of the year”.

A Tunisian living in Brussels, Sofyann Ben Youssef is the one-man orchestra behind the Ammar 808 project, and it seems he’s gotten his second wind. Global Control / Invisible Invasion, his latest album, has its roots in India. And the man does know the Eastern country: “When I was twenty, I went to Delhi to study sitar and tabla.” In 2019, the musician and producer returns to the subcontinent, his mind full of new ideas. There, he drowned himself during twenty-four days in Chennai, the capital of the state of Tamil Nadu, in the south of the country. Well prepared and knowing exactly what he was looking for, Sofyann dived into a world of rhythms, loops, samples and myths. For PAM, Ammar 808 reads some excerpts of his musical travel diary, a journey right into the heart of the trance culture.

Absolutely! Actually, before I even discovered it from the inside, Indian music had been a real mystery to me. A mystery that I wanted so much to unveil. Then, more than twenty years ago, Pakistani sitarist master Ashraf Sharif Khan gave a concert in Tunisia. I was literally left awe-struck. I knew he would be staying in Tunisia for a while after the show, so I contacted him. And he agreed to give me music lessons. After he left, I decided to go back to the source of this music myself, so I could train myself there. I studied the sitar and the tablas in a very intense way: four hours of lessons in the morning, jam sessions with the other disciples in the afternoon, and in the evening I would attend concerts.

Yes, since you are adopted as a “disciple” by one of the school’s masters. In these institutions, education is free. This was precisely the subject of my final thesis: the modes of transmission of Indian traditional music. Coming from a North African culture myself, I was not that much disoriented. In India, “râgas”, that is, musical skills, are the same as in Arabic music. The spirit of improvisation, its codes, the musical path of the melodies, the colors thus created are very similar. And then, the lurching Indian trance, often performed outdoors as in Arabic music, can be very brutal. Be careful, these are heavy beats!

Yes, this first great trip corresponded to an initiation to music performed in North India, Nepal and Pakistan. Knowing that the other major genre of Indian music is Carnatic music, which concerns only South India. Under these two great families, you find many, many subgenres.

While preparing this new Ammar 808 album, you decided to go to Chennai, capital of the state of Tamil Nadu in South India.

Yes, Global Control / Invisible Invasion is a musical search in order to satisfy my curiosity about South Indian musical subtleties. The general idea, if you like, is to work on my music in individual chapters, each one corresponding to a geographical region, which would represent for me a different adventure every time. On Maghreb United, my first album, I talked about my origins, with all the difficulties that this kind of perspective can arouse. I addressed identity issues, cultural union, similarities, differences… In the case of India, it’s a different story. I traveled there in my twenties, and went back in my forties, almost two decades later. Carrying out this project in India was really a personal promise, which I made to myself a long time ago.

Yes, full of new desires. I already had a theoretical and practical knowledge of India, as well as quite specific aspirations, especially when it came to vocals. There I relied on Paul Jacobs, producer, bassist and a great specialist of Indian music. All the recordings were done at his home-studio in Chennai. Paul is a key character in the project, because he was a real interface between my musical desires and the reality.

As well as a boost element to the process…

While I stayed only twenty-four days! I told him what I was looking for and he brought me the corresponding musicians. So yes, he was an incredible time saver, in a country where musicians are legion! Paul Jacobs, beyond his musical skills, has got an immense knowledge: he knows the stories, the myths and mythology behind India’s various musical traditions. I also took advantage of those few weeks in India to take lessons of “thavil” [an Indian drum] – it was very intense! In fact, everyday had its share of novelty. To me, the music of South India sounds very African after all. And it excites me. There is a very earthy side to it, a very fiery side that has always attracted me a lot. This exploration is less easy in North India, where the music is more aerial. And then, the architectural side of Indian rhythms, such complexity fascinates me! Afterwards, with Ammar 808, I tried to translate all this material for the dancefloor.

What do the terms “Global Control” and “Invisible Invasion” – the title of your album – refer to?

Much as I attempted to reach something original with Maghreb United, with this new project I have rubbed shoulders with more timeless concepts. I wanted to link Indian mythology to the digital dystopia we are experiencing today. By “Invisible Invasion”, I evoke the invisible war, the eternal conflict that blinds us and of which we are all victims ultimately. From the monetary system to religion, including the fear of Covid that is now exploited as a [political] weapon… For me all these forms of fear refer to the concept of the “Invisible Invasion”. In Indian mythology, these fears are embodied by divine representations. I find it very interesting that a religious system makes it possible to embody evil. I find that it is a form of spiritual organization that makes it possible to better explore, and to better understand.