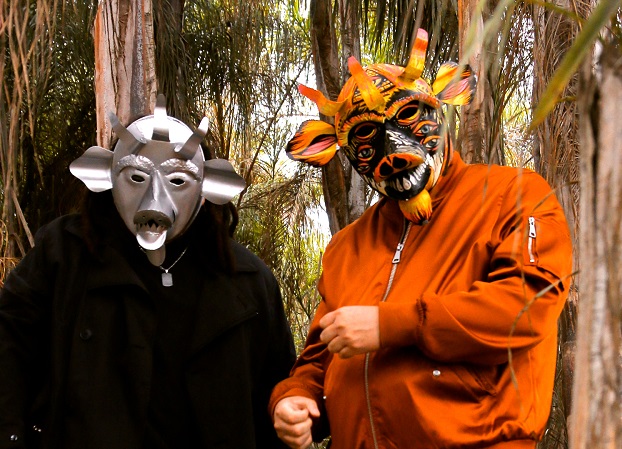 Vudufa, the duo that dances with demons

The duo from Lima explores the connections between Latin music, Afro-Peruvian rhythms and electronic music on their new EP South American Loa. Interview and preview.

It’s over, Dengue Dengue Dengue no longer has the monopoly. Enter this masked Peruvian duo who enjoy introducing the essence of Afro-Peruvian culture in clubs. Behind their scary pig disguises, Pounda and Nomodico avoid the comparison by offering a sound that is raw compared to their peers. In reference to the divinity of the voodoo cult, South American Loa gathers the rhythms, aesthetics and the spirit of the Afro-Peruvian culture with six tunes as ferocious as they are hypnotic. On the eponymous track, Vudufa samples the quijada — the dried donkey jawbone brought by African slaves to Latin America during the colonial era. Mystical songs overfly the lo-fi electro of “Damballa Boa,” preparing the audience for the dark mid-tempo techno of “Baron Samedi is Here,” which is based on the rhythms of the festejo dance. Here, the duo invites us to discover the dancefloor delight “Ayahuasca Schock,” in reference to the hallucinogenic drink consumed by the shamans of the Amerindian tribes of Amazonia.

What is the story behind “Ayahuasa Shock” ?

Ayahuasca Shock is a song in which we used samples of voices from an ayahuasca ceremony. The phrases do not have a particular meaning, they were modified and sampled so that they harmonize with the sound of the track in general. What we were looking for was a sound that would transmit the mysticism and we found that with the use of the synthesizers and bass. We didn’t want to lose the aggressiveness and speed of the track as well and that’s why we used quite dynamic percussion.

Why do you draw your inspiration from the afro-peruvian heritage in some of your songs, and what makes it interesting for you ?

We believe that Afro-Peruvian music (which is a heritage of African culture) is present in almost all the rhythms of Peruvian popular music and definitely it is part of the most important ones. In addition, it is a concept that is divided into more subgenres and musical styles – like marinera, festejo, landó, tondero, zamacueca, toromata and more.

How do you merge it with electronics in your songs to propose your own interpretation ?

What we do in Vudufa is to show our proposal of that. Afro-Peruvian percussions are rhythmically perfect and can be fused with any sound. They also consist of an incredible palette of instruments (cajón, cajita, quijada, etc.) which gives an atmosphere and personality to our compositions. We like to fuse Peruvian genres , both Afro and folkloric, with any electronic rhythm – ranging from house and techno to synthwave. We’re not focusing on trying to classify the genres and basically we search to mix everything that’s possible and that we enjoy with the rhythms of our country.

Can you tell us more about the voodoo references in your work?

We are not clinging to any belief as such but we believe in some way in superior beings and their divinity. The various cultures were responsible for dividing them over time but we believe that they have the same origin which is just told in different ways. We consider that what is inherited from African culture goes far beyond music. The mysticism and personality of the spirits and loas somehow give an idea of a closer relationship between the divinity and humans.

We also understand the variant of voodoo in this part of the continent as a syncretism between Africa and the Christian religion. We also believe that deities and divinities should not be governed by labels and their presence can be felt everywhere – so why not in South America as well? Our name ‘Vudufa’ seeks to relate this identity to this part of the planet as it is a mixture of two words – ‘vudu’ and ‘burrofa’ which is a Peruvian folk demon.